Acronym For What? Ami Nicole Explains it All

In Conversation With the Detroit-based Photographer Behind Acronym Official 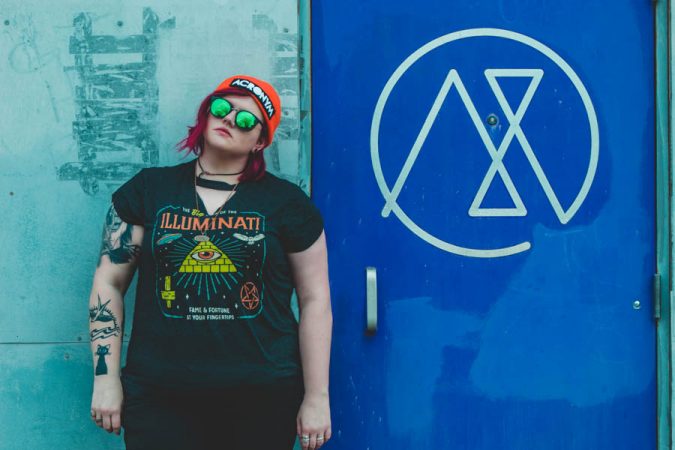 Acronym Official is the creative outlet of Detroit-based Renaissance gal, Ami Nicole. These days she carries many titles: writer, influence, media and event producer, but she started out as a photographer. In many ways, it’s this experience, of capturing the city’s changes over the past decade, that has most shaped her career: she understands the nuances and myriad strands that comprise this fast-growing city.

Her work has been featured in Merry Jane, High Times, The Oakland Press and Macomb Daily.

We caught up with Ami to talk origin, inspiration and future.

CV HENRIETTE: PRETEND WE’RE MEETING FOR THE FIRST TIME, TALK TO ME.

CVh: YOU’RE A PHOTOGRAPHER. HOW’D YOU GET INTO THAT?

AN: I started playing with film cameras, photographing my friends at school, getting them developed.  Once I got to high school, I started doing Darkroom Photography, where I learned the fundamentals of burning, dodging, composition, etc., and then moved up to digital. I did a lot of portraiture after strictly still lifes. Then I began going down to the city every second I could – even out on my office lunch break when I was working it full time. I just love to capture life, it’s pretty addicting.

AN: I was obsessed with the city so I spent as much time as possible prior to moving downtown after being in surrounding cities for years in 2016. I lived in the University District at 7 Mile and Livernois, with quick access to both Detroit and Ferndale where I was working at the time for the radio umbrella that houses 101 WRIF, 94.7 WCSX, and 105.1 The Bounce. I’ve been integrated into the city and shooting photos here since I graduated high school in 2007.

CVh: HOW HAS THE CITY SHAPED YOU? AS AN ARTIST? AS A PERSON?

AN: It became my “home” in my heart after I came to see my artistic potential. That maybe sounds arrogant, but that’s the best way to explain it. My home life wasn’t exactly the best situation, and once I was able to leave the toxicity behind, I was able to grow and change dramatically, and heal my own toxicity in the process. Working around people with similar issues and life paths, and being able to be open with people has been the best thing for me, and I feel like I’m constantly improving.

Because of the way that people struggle in Detroit and understand that kind of trauma, it made it easier to be open about the struggles that I had growing up, but also to be open about my anxiety and depression as a creative. I am a huge advocate of speaking your mind and speaking your struggle to help further the conversation and working to end the stigma about mental health. There are a lot of creatives that struggle and feel as if they can’t do it all – and while everyone has a different threshold, I’m living and breathing proof that you can have anxiety and depression and still be able to succeed in life. That, however, is not me holding anyone to a specific standard, but I’m hoping the more open I can be, the more that people may think “maybe I can do it after all. Maybe I should try.”

CVh: THERE’S NO DOUBT DETROIT HAS CHANGED IN THESE PAST FEW YEARS. WHAT HAVE YOU SEEN AND WHAT DO THESE CHANGES MEAN TO YOU?

AN: It’s always a double-edged sword with me because I spent a period of time checking out and photographing abandoned locations, but at the time I wasn’t being scolded by downtown security teams, and things like concerts and portraiture clients were a lot more accessible to me as an up-and-coming artist. That has since changed. Concerts are now harder to get approval for as there are more photographers fighting for passes, and so many new photographers on the rise that are doing gigs for little-to-no-money, which is causing a lot of the pros to lose out on paying clients.

As far as the landscape of the city, a lot of the “blight” has been demolished (which yes, some of it needed to be), but I’ve also seen moves to get rid of a lot of the iconic places in the city, like the Grande Ballroom. Can you imagine if the city’s outcries to kill Michigan Central Station would have happened? Ford likely wouldn’t be moving to town and changing the landscape of the culture and adding new jobs. It’s all about perspective. In juxtaposition, it’s made acquiring space very difficult, as everything is over $300,000 and needs a new roof or isn’t wired for electrical. So you roll with the punches, as Detroit has always taught us to do.

AN: Utilize your social presence, but don’t obsess over social media or follow trends. I spent too much time worrying about what other people think, what was popular, what was desirable, instead of following my own drum and breaking rules that people put in place as “Fine Art Photography.” Take this information as gospel: DO NOT LET THE INTERNET RUIN YOUR PERSPECTIVE ON LIFE. You can be a successful artist and not have a 10K following. Followers are not paying your bills, so don’t stress it. Also, don’t be creepy. If you’re a dude and you like taking risque photos, keep your hands to yourself.

CVh; OK, SPOILER ALERT: YOU WORK WITH DII, BUT YOU ALSO HAVE YOUR OWN SUCCESSFUL ENTITY, ACRONYM. DO TELL US ALL ABOUT IT.

AN: I started writing for The Eastern Echo in college. For one story, my editor blocked me on an already approved piece about Rebel Nell, the Detroit-based Jewelry Company. The company is now known for helping women through employment get out of poverty-she told me specifically that “nobody cares about Detroit” (in Ypsilanti). So I started my own site. For my birthday, an ex-boyfriend bought my domain for me as a gift and told me he was proud of me and wanted me to keep writing. Shout out to Eric, because I’m not sure if I hadn’t had at least one person in my corner encouraging me to continue if I would have just stayed “just a photographer.” My former nightlife photography mentor, Dontae Rockymore, AKA Mr. Heatcam, told me I “was the most lethal” when I wrote with my photography.

Fast forward to today, a lot of my stories are focused on Detroit, creative business, or music, and have my photography. Sometimes people get confused as to “what I do” or “who I am” but the best way to describe it now is that I am a multi-disciplinary creative, and I specialize in a lot of stuff. And I like it that way.

CVh: HOW HAS ACRONYM SHAPED YOU AS A JOURNALIST?

AN: I find that I collect my thoughts better with writing. I don’t misstep as much as I do when I talk (sometimes my mouth moves faster than my brain), but I think it’s only helped me communicate ideas better, and helped me to understand the way the world works better, the good and the bad. Being able to have that “blog” (I hate when people call me a blogger) as a pet project, and through it a job in radio, and working with Detroitisit as a freelancer, I’ve been able to be a lot more versatile with my writing and flex different parts of my brain, not only in writing, but in strategy on how to market the writing, and know what each piece of the puzzle is, versus there being a writer, a photographer, a social person, and designer in four separate bodies. I am all of those people, in one.

CVh: WHAT IS THE FUTURE OF JOURNALISM?

AN: I’m afraid of it. Not to get too political up in here, but journalists are under attack and now the easiest thing to dismantle an argument is to yell “Fake News.” Journalism is supposed to be unbiased and based on facts, and I feel like a lot more “journalists” are writing “fact-based narratives” versus actually sharing all the facts. They are using the facts that support their argument and ignoring the things that don’t, and that’s not what journalism is supposed to be, and truthfully, it is unethical.

CVh: WHAT’S THE FUTURE OF AMI?

AN: LOL, hopefully, to keep on living. Sometimes that gets hard. I know it’s hard for everyone, but as long as I can keep doing what I love, and continue to build my life with my fiancé Chuck Bean, and can provide for my fuzzy children AKA Kylo and Izzybit, I honestly can achieve great things with those factors in place. A plus would be to make an impact on those around me, but I don’t get to decide that, other people do. Hopefully, I’m rocking people’s worlds so far!

AN: Found in the Underground is a branded series I’ve been doing bi-annually for the last two years. It focuses on showcasing artists of all different mediums in one space together. My collaborators and I do a ton of promotion and networking leading up to the event and on top of the artists that showcase photography, jewelry, video, painting, drawings, and more, we have fire performers, performance art, and musical performances. The last three were at The Tangent Gallery, which I consider our “Home Base,” and the music that was showcased was Rock. We then branched into a festival-style of one Rock Stage and one Rap Stage. November 8 (Friday) is being held at the Lexus Velodrome and we are showcasing Electronic talent, mostly focused in House Music. With this particular location, ACRONYM, and my partner for this event, WIA Studio, have secured the Velodrome to allow rollerblading, skating, and skateboarding. It’s going to be an amazing time, with great food and drinks from WEPA, Monster Foods, and Desert Oasis Coffee Roasters.

CVh: WHAT AM I MISSING?

Trick or Treating in Detroit Looks Different This Year

7 Things To Do in Detroit This Halloween Weekend