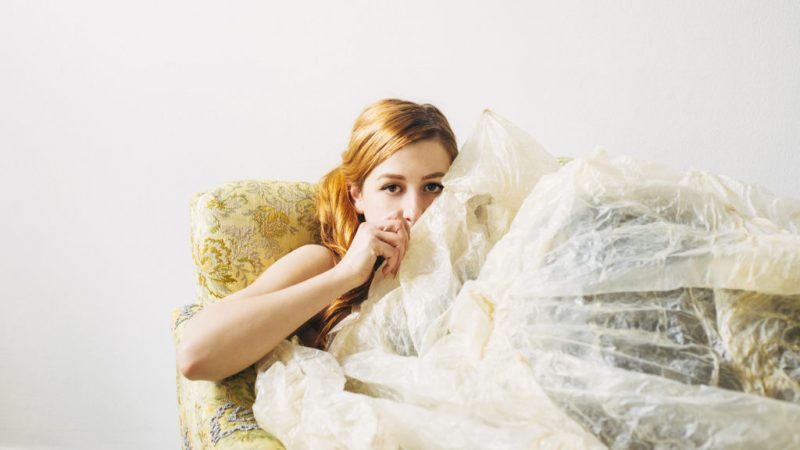 “I was inspired by Native American culture at the beginning of my career,” says artist Cristin Richard.

“I was looking at how they used every little last bit of the animal. If they hunted an animal, not only would they eat the meat, but they would process the skins. They would use the bones for tools. Take the inner guts and turn them into wearable things. The Inuits would make parkas out of them.

That inspired me, and I started digging in. What do we have in our local community that’s a bi-product of the industry like those guts? I started using sausage casings.”

Richards work has evolved through the years from dresses made of skins to performance installations in some of Detroit’s most architecturally stunning and, often, inaccessible buildings. Such as the Detroit Club’s Presidential Ballroom, where she will be presenting, Point of Return, this Friday.

The allure, for those unfamiliar with the artist’s work, will be entrance into some of the members-only areas of one of the nation’s oldest private clubs. The reward will be Richard’s work, a multi-sensory experience, that invites audiences to question the concept of value in contemporary society:

“I’m thinking about the material and what it does to us. This material that I’m working with—what is it going to do to the rest of the world as it accumulates? Where does it go? How long does it take to go away? A cotton t-shirt takes about 200 years to break down. A typical cotton shirt.”

We sat down with Cristin over tea to learn more about her life and work. It was green tea, sweetened with local honey, and it’s worth noting that her shirt matched her curtains. If the costumes in her home studio are any indication of Friday’s performance, you are all in for a treat.

The following questions were submitted by email. We hope you appreciate this interview more knowing that it happened twice.

CV Henriette: For those who’ve never encountered your work, describe your practice.

Cristin Richard: My central focus is in communicating the human condition. I like to present the world in a new way—a way that reveals the beauty in the topics we often tend to avoid. Material plays a dominant role in my practice.

Typically, I work with natural materials. Organic matter sparks a dialog of what it feels like to be human. These materials, like the aging human body, are impermanent and degrade over time.  I’ve been greatly inspired by Native American and Inuit cultures. Discovering Inuit in my distant family lineage has given me an even deeper connection to the research and practices. I must have been cosmically drawn to it, or perhaps it was embedded deep within my subconscious.

CVh: How has it evolved throughout the years?

CR: My work has always had a strong fashion narrative. It is an element that we can all relate to. It provides a second skin, a protective layer, but also an extension of our identity.  My career began with sculpture, which quickly evolved into installation. I love being able to experience work in 360 degrees. Elements of location and lighting add another layer to play with. In 2011, a Parisian residency paired me with a ballerina from the Paris Opera. This is when I really began to explore the incorporation of the human being. Now, both the performer and the audience inform my practice.

How has Detroit shaped your work?

CR: The Detroit that has shaped my work is fleeting. But just like the materials I work with, ​Life in Detroit has taught me to see the beauty in decay…the poetic and unpredictable kind of character. This sort of beauty has a true authenticity to it. As things quickly change here, I question more the impact of society on the individual.

CVh: How has your time abroad shaped your work?

CR: In my time abroad, I was blessed to be surrounded by and work with some amazing artists and arts professionals. Their deep understanding and sensitivity to my practice, and the arts in general, helped to propel my work to another level.
Europe is just next level. Life is well valued and thought out. Seeing how others approach and live their daily lives magnified the subtle differences for me. We have a great deal to learn from others, and I love taking that in on every trip. It has also given me a stronger sense of history- experiencing historical architecture and art has had such a profound impact. It’s this sort of substance that feeds the soul.

CVh: Can you specifically talk about how your time in Iceland influenced your work?

CR: In the dead of winter, I spent three month’s away on residency in Reykjavik. There was only a few hours of daylight, which helped me tune in to my own internal clock. It taught me a great deal about the preciousness of our resources. The island did not have continuous access to the materials I was used to. Vegetables do not grow, animals were butchered seasonally…These sorts of variables inevitably impact how you value things. When I did get my hands on the materials I was looking for, they were minimally processed. Having to put in the extra work, processing them on my own, gave me a deeper understanding of how far removed we are and how much goes into the things we take for granted.

I was able to exhibit the product of my residency at Kunstschlager Gallery. It was the first time I had taken such a static direction, embedding a woman into the sculpture. At the opening, I was worried that I had challenged her too much, with sitting for such an extended period of time. I also found the Icelandic people to be a bit guarded, which added to my nervousness and uncertainty. After the performance, the performer seemed quite sweaty and frantic to get out of the sculpture. After getting dressed, she seemed to lighten up. She explained how demanding it was to become a silent, object of attention, having nowhere to channel her nervous energy.

On a more personal level, the exchange with the performer stimulated my practice. Each of our own fears and hesitations, gave me a closer understanding of my own creation.  I’ll never forget the words spoken by that performer in Iceland: “I know it was a successful piece. I could see it deep within the eyes of each viewer when they first set their gaze upon me”.

Our future depends on our ability to exchange ideas and empathize with one another. With increasing tensions in society, the capability to openly discuss difficult topics has become blocked. I think that time in Iceland helped me to realize that art has the power to transcend barriers.

CVh: What do you miss about Detroit when you’re away?

CVh: Tell us about the role music plays in your work?

CR: Ever since the Parisian residency, I’ve been working with my boyfriend, Nate Czarling, on the sound component. It has become the vital life force of every performance. It seems to work so organically because he is in tune with my process, aesthetics and brings his own grittiness.

CR: Similar to fashion, I love that architecture is a record of history. It speaks directly to the year it was built, through it’s function and the materials that were used. Linking the architecture of Detroit with my work has become an imperative aspect. Outside of the white box gallery, it helps deepen the experience… My goal is to create impactful experiences. If my work does not make you feel something, I’m not doing my job.

Point of Return is hosted by PLAYGROUND DETROIT in partnership with The Detroit Club. This one night only performance installation takes place this Friday, March 22nd. It is open to the public, with a $10 suggested donation.