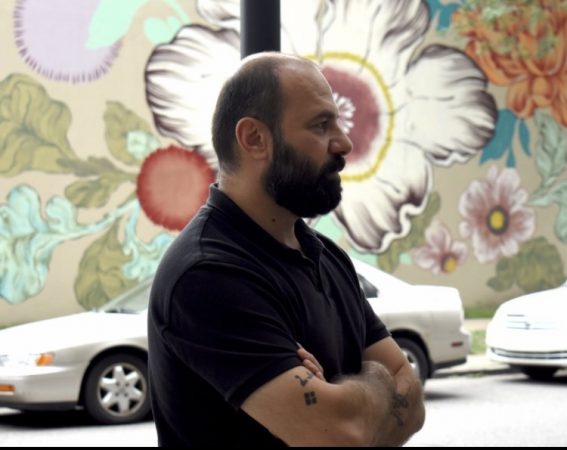 Hugh Yaro is eating an apple. Maybe he’s not. It could be that he ate the apple before I arrived, but during the course of our conversation he is waving an apple core. That’s something like 90 minutes of action, hands and apple core floating through the air. Which I interpret as a sign of wisdom and humility. Like an old man peeling an apple with an army knife, slicing pieces of fruit into his mouth. The fact that he does not eat the apple or offer me a slice somehow makes him more compelling.

We’re at Red Hook, the coffeeshop beside Yaro’s restaurant, Craft Work. The owners are old friends from his coffee days way of Stumptown Roasters and NYC. Yes, Yaro spent years living in NYC and he also had “coffee days.” The latter perhaps unexpected and certainly impressive considering the trajectory of his career.

If you’ve ever been to Detroit, you know that the opening of a new anything is a big deal—restaurant, coffee shop, sauna, dry cleaners. It’s a cause for celebration. Of course, like everywhere, not all businesses survive and not all are equally good. During the past decade or so, Yaro has opened three establishments in succession that pushed boundaries at their openings and are still met with equal acclaim.

His first foray into the hospitality venture was Ronin Sushi, an upscale sushi restaurant and nightclub in the nearby suburb of Royal Oak, and a precursor to the cocktail movement that seems to be only growing stronger. His second venture, Commonwealth, a café and roaster in the suburb of Birmingham. Now a staple, it faced a slow start as it was among the first coffee shops in the area to introduce pour overs. Ten years ago the elimination of drip coffee was a big deal.

In both these businesses Yaro had seasoned partners. While I don’t ask directly, it’s clear that he learned a lot from these collaborations, providing the experience and courage needed for his next venture.

It’s been nearly six years since he’s opened his third and now sole business, Craft Work, in the West Village neighborhood of Detroit—in the former spot of the Harlequin Café. In an industry where many have partners, Yaro has gone at it alone. And from the outside, it appears with relative ease. It’s been an evolution over the years. When he first opened, he tells me, “the walls were bare.”

The years since have brought art work, a change of chefs, a raw bar and yet the menu and atmosphere have maintained a delicate equilibrium of elevated and successful—from date night to solo burger at the bar. Most strikingly, Craft Work, like Yaro himself, has remained distinctly itself.

Throughout our conversation, Yaro mentions intuition. It’s a convincing explanation for a non-chef who (successfully) entered the restaurant industry, citing travel and his mother’s home cooked meals as his biggest culinary influences. He listens for his next moves and makes them. His advice? Don’t think too hard.

It’s an equally convincing explanation for his strength in character. Where most people and businesses tend to fall into a single category—you’re the cocktail spot or the cocktail guy. You hang out with cocktail people, etc., Yaro stands alone.

Although he lives above his business and, I imagine, works around the clock, it doesn’t consume him. He isn’t exceptionally eager to talk or not talk about it and is equally at ease discussing the record industry or art, between waves of his apple core, as he is talking about kitchen matters or coffee. It’s a miracle, quite frankly, to meet anyone who’s spent six in years running a restaurant so chill.

Six years is a good stretch for a restaurant. Yaro, unlike many of his contemporaries, isn’t making aggressive moves to expand his empire and he isn’t flustered by the influx of new competition. Craft Work, like Yaro, seems intuitively confident in its direction.

Both remain an eclectic and reliable source of fine taste and good conversation.

CVh: Where is home?

CVh: How’d you get into music?

HY: Parents would play and sing Arabic music in the house.

CVh: Tell me about your time in the music industry?

HY: 1997-2005 intern at Interscope, worked at Maverick, Knitting Factory, Tuff City and Tee Pee. It was good times. A reasonable amount of sex, drugs and rock n roll, Jazz and Klezmer. Any major dude will tell ya.

CVh: But how’d you get into hospitality?

HY: Coincidental. I was more interested in not working for others but working with others to create something new.

CVh: What do you miss most about NYC?

HY: Walking. Good public transportation. Pizza and three garlic knots for a dollar. The energy and excitement that people bring to the city can be inspiring.

HY: Meeting people and having people like what we do.

HY: Meeting people and having people not like what we do.

CVh: Coffee or tea? How do you take it?

CVh: Craft Work: Tell me about the menu.

HY: Because sometimes we like to have the option to eat a different variety of oysters as well as tartar, crudo and poke.

HY: Chaka Kahn has a sister that is also a singer and her name is Taka Kahn, but their real names are Yvette Stevens & Yvonne Stevens, clearly not as fun.

HY: Anywhere like in, “Anywher,e” or Anywhere in Detroit? It’s not as fun going out to dinner on a Sat night…Selden.

CVh: Saturday night reservations. Anywhere in the WORLD. Where?

HY: Fox, El Club—not sure what is going on there at the moment. Artist: PJ Harvey opening for Sade.

CVh: In your head? Right now. First song that comes to mind.

HY: Arizona—Thanksgiving time and La familia is in the desert.