The Gallery Owner Goes Deep into Her Detroit Art Mission 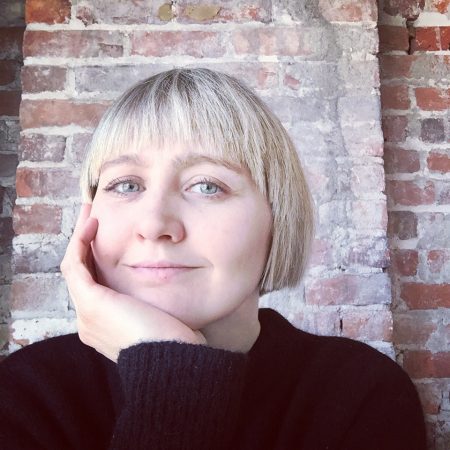 Artist Kristina Oss, opened K. OSS Contemporary Art Gallery in Eastern Market Detroit. We sat down to learn more about her practice—as an artist and gallerist.

CV Henriette: Let’s start with you. In addition to owning a gallery, you have your own practice? When did you start making art?

Kristina Oss: In the city where I grew up, children are exposed to very different forms of art from a very early age. Kids start going to museums, dance performances and music concert with their parents when they are very young. Every kid from my childhood attended either art school or music school or both. I always had a great passion for drawing, I did sketches all the time, but I never took it too seriously.

The protagonist of my recent work was born at the same time as my daughter. It was then when I realized that I wanted to explore my own short stories by creating illustrations. I don’t really consider myself a serious artist, but a devoted, enthusiastic illustrator. You can have a look at some of my work at my website www.krixy.com

CVh: Was the plan always to open a gallery? What’s the origin story behind K. OSS?

KO: I always saw myself connected to a gallery or a museum one way or another. In different places like New York, San Francisco, Paris and Buenos Aires, where my husband and daughter and I spent several years before coming to Detroit I didn’t feel settled enough to begin to realize my ambition about a gallery.

In Detroit everything has happened naturally. We found this beautiful space that was a gallery for the previous four years. Keeping the space a gallery meant I could carry on that tradition and realize something I had been thinking about for years.

CVh: Who are some of the past artists you’ve shown? How have you developed these relationships?

KO: When I first came to San Francisco I was very fortunate to discover SF Art & Film where I started learning filmmaking. Ronald Chase was my mentor. When I saw his painting for the first time I was inspired immediately. His unusual career includes a role as dancer (1957), his first painting shows in Montreal and Boston, his move to San Francisco (1964) where he also contributed to the underground film scene. He directed two Avant-guard feature films in the 70’s and is also known as an innovator in opera, one of the first to combine film and projection in theater. For my first exhibition I was especially pleased to bring you his work that I have followed for over a decade – catching his impressive shows in both San Francisco and Paris. When we moved to Detroit, one of my friends invited me to a dance performance, where I met Sarah Wagner and her son Otto. Our children started playing together. I learned she was an artist and I began following her work. A year later, when we began thinking about artists that we would like to present at our gallery, her name was on the top of the list. I met Mary Gillis at the opening of our gallery last February and she invited us to visit her studio. We were highly delighted to see her work and see how her style has evolved from large pastel drawings, collages and prints to paintings and large-scale sculptures to mixed media, work on aluminum and recycled guardrail. We were very pleased to present her recent work “Metalscapes” at our gallery and we are glad her show had such a great response.

If you could curate a show with any artist in the world, who would it be?

It’s a very interesting question, and almost impossible to answer. There are far too many artists I admire, so I couldn’t reduce it to one. I am very inspired by the work of the artists that we are showing at our gallery or going to show. But I do wish we could have an installation by Chiharu Shiota at our gallery one day.

CVh: Excluding your own, what’s your favorite show you’ve seen over the past year?

KO: When I was a child I watched my mother create beautiful costumes for theater and ballet and I developed a deep love for needlework and its creative process. That’s probably why I really enjoyed the show of Star War Costumes at DIA, but a show that inspired me in the direction our gallery is moving, was the work of Lauren Semivan at David Klein, because I thought the work illustrated a serious and distinctive imagination, something I especially admire.

CVh: Plans for the future?

KO: Be optimistic, focused and positive. Present the serious work of artists and strive to make the art scene of Detroit wider–it seems limited in exposure to new ideas. When we introduce artists who have different perspectives, we open-up more dialogue and add to the wonderful energy that is already here.