Detroit Sounds: A Message From The Founder of Detroit Art Week 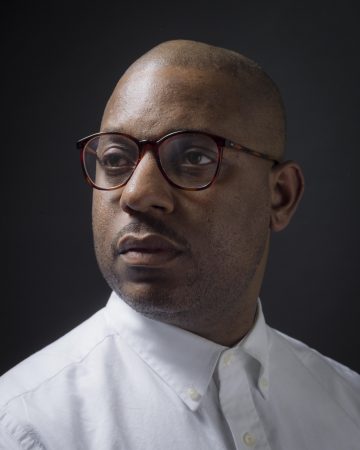 I first met Amani Olu at a vitamin themed party I co-hosted in a basement bar downtown. The party wasn’t that great—vitamins. Nevertheless, we met up for coffee the following week. In those days, and maybe still, Amani was taking a lot of coffee with a lot of different people.

Detroiters like to say “Get to know your neighbors when you move onto the block.” Maybe that’s all people, all over. Anyway, he did. All the people on every block. Not actually, Metaphorically. Like the new kid at high school, this art publicist—curator/writer/author—came to Detroit on a mission to meet each student before running for Class President.

Well, not exactly President. That would imply he was running for Mayor or something. Although, at the time, he was working on Ingrid LaFleur’s campaign for Mayor.

The point is he took the time to meet anyone and everyone whose line of interests overlapped with his to the point of getting a feel for the land, to understand how things were done around here before taking the reins on wildly ambitious and aspirational projects such as Detroit Art Week.

That forest for the trees line is totally applicable here!

In less than two years after coming to Detroit, Amani gathers an advisory board, establishes a non-profit and successfully organizes the city’s most successful galleries and art institutions—like herding cats, people—into a lively weekend of artists talks and dinners while celebrating two legendary artists, Carole Harris and Allie McGhee. Alongside partner Aleiya Lindsey, he also brought in hella press. Including Artspace which yielded this article I have complicated feelings around. Coffee anyone?

Most recently his longtime friend, Larry Ossei-Mensah, joined him in Detroit as the Senior Curator at MOCAD, and they threw a party called Thick as Thieves which was way better than my vitamin themed fiasco.

Takeaway: Amani came to Detroit to outdo us. Well, me.

Haha. We’re cool. He took time for this interview. Thanks, Amani.

CV Henriette: Name the song that most accurately describes your time in Detroit.

CVh: But, for real, what keeps you in this city?

AO: Family, love, excitement around the unknown and the art scene—it is exciting and very avant-garde.

AO: Digital. I run a Saas company called IMG SRVR, which is all about bringing ease and elegance to the cloud storage industry.

AO: Sunrise. The early bird gets the worm.

CVh: Artist you most wish you saw live, in their prime?

OA: The name my parents gave me at birth.

CVh: What’s the name your parents gave you at birth?

CVh: On a scale of 1-10—least to most—how obnoxious are these questions?

CVh: Who should I interview next?

MOCAD Partners with the City of Detroit For Rapid Response Fundraiser