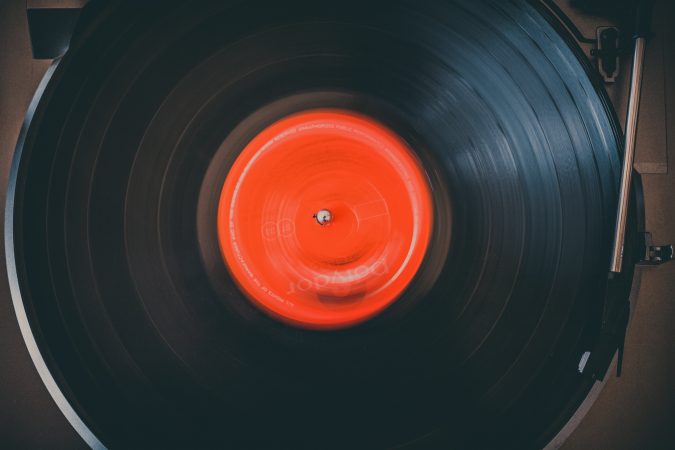 In celebration of Record Store Day 2018, we sat down with Vinnie Massimino, co-founder of the Detroit-based record label, Portage Garage Sounds.

In his own words, “Vinnie Massimino is a person. His first wisdom teeth came in at age 16, which the dentist remarked as ‘uncommon’, as there were only two. The third wisdom tooth, located in the top right corner of his mouth, arrived at age 28. The fourth in the series is currently in development.”

Vinnie is also the co-host of “Valenti y Vinnie” on The Lot Radio.

CV Henriette: Before PGS, you started your own record label, Chambray. Tell us about it. How’d you get it started? Who was on your roster?

Vinnie Massimino: I love music. Chambray Records was a realization of a years-long goal to become a patron of the arts by promoting music from musicians I adore. Someday I wish to be Pannonica de Koenigswarter.

CVh: How’d you connect with Zach and Benny from PGS?

VM: There was a charity bowling game for music-type people at the Garden Bowl and all three of us had the same score.

CVh: How has your experience working on PGS differed from Chambray?

VM: Chambray Records is to Janus Films as Portage Garage Sounds is to the Criterion Collection.

CVh: What are some of the challenges associated with starting a record label?

Pressing a single is very expensive, even if you’re making a white label. A record label with the goal of making a vinyl record has to go through a tedious process—mastering, lacquer, plating, a pressing plant that is accepting new clients. Hoping the test pressings are flawless, listening to the test pressings with an artist and reassuring them that nothing will sound as good as their studio monitors, sending approvals. Jackets & center labels—are they printed correctly? The vinyl itself—hoping it isn’t delayed because a major label decides to rush order a 50,000 unit repress of something that already sold millions decades ago, littering dollar bins far and wide because “vinyl is trendy.” A distributor who will take a chance on a new artist or label; or shops willing to take the risk with you. (And then, hoping the price per unit is low enough to sell for a modest profit, if at all).

And, if you want to be a respectable label, there’s more—giving your artists advances, finding budgets for PR/marketing or the will to send hundreds of emails yourself, and ultimately creating royalty reports.

CVh: I heard a rumor about bringing Chambray back. News to share?

VM: Chambray is over there (points in a direction). Creativity isn’t a never-ending well. Sometimes you need to look in other places.

VM: What is the half-life for polyvinyl chloride? A well-preserved vinyl record can become a living artifact for future generations.

Have you seen Beyond Thunderdome? There’s a scene where kids listen to a French instruction disk on a wind-up phonograph, far into the future, post-apocalypse. The idea that something made today may survive past my lifetime and yours is great—whereas, when the internet goes down, there go streaming services and play counters with it. Music should be for lifetimes and across centuries.

CVh: What’s the first record you ever bought and how old were you?

CVh: What’s the most recent record you bought?

CVh: Favorite record label aside from PGS and Chambray?

VM: My favorite record label is the record label you trust to curate a world of sound for you through taste and consistency that also breathes curiosity into your life. Which is ultimately a record label that isn’t willing to play it safe.

VM: Hello Records—the least pretentious record store in the city. I think my biggest issue with record culture are unfriendly staff and unwelcoming environments. If you’re new to vinyl, jumping in is intimidating—you’re entering a new culture and have the potential of spreading negative energy at someone for not understanding what the culture is like which can seem like yelling at someone for not understanding your language.

So just breathe, be helpful and positive.

CVh: What question did I forget to ask?

VM: All questions are good on the pursuit of knowledge.