While Whitmer Urges Michiganders to “Pause To Save Lives,” Detroit Detroit Will Tighten Measures As Cases Rise in the Surrounding Suburban Communities 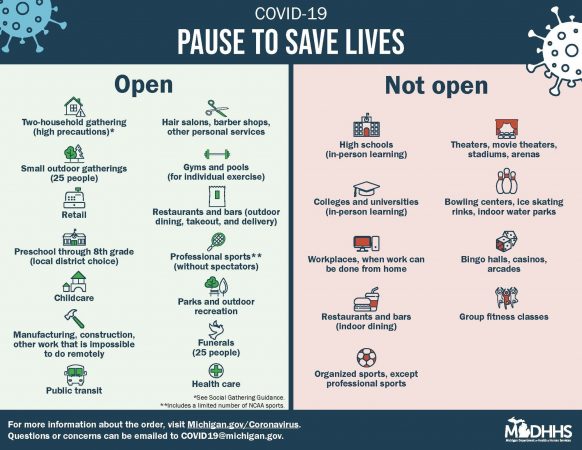 With the seemingly endless COVID-19 pandemic entering what is without a doubt the second wave of uncontrolled spread, new lockdown measures have arrived from Governor Gretchen Whitmer and the Michigan Department of Health and Human Services [MDHHS]. The lockdown orders aim to pause certain actions across the state in order to prevent the further uncontrolled spread of coronavirus in Michigan.

Under the new order, indoor gatherings are limited to no more than two households at a time; an effort to curb spreading inside residential gatherings, a method in which MDHHS stated was a factor in the rise of cases.

Additionally, bars and restaurants will be only operate using outdoor dining, carry-out and delivery options, casinos and movie theaters will be closed and colleges and high schools are allowed to remain in operation but must switch to remote learning. Gyms and hair salons will also be allowed to remain open, but there will be no group classes warranted under the new lockdown rules.

The order also allows for continued in-person K-8 schooling and childcare services, as well as the continued operation of public transit systems. The new measures will take effect Wednesday and be in place until they end on Dec. 8.

Briefing the city on new lockdown measures, Detroit Mayor Mike Duggan praised the responsible practices of those residing in the city while chastising the actions taken in other parts of Wayne, Oakland and Macomb County.

“What we were seeing is behavior in the surrounding suburbs that was, in my mind, was completely irresponsible. Just drive through any of the suburbs, and you’re seeing people without masks. In the city of Detroit, our people have taken this very seriously and I said at the time, we can’t put a wall around our city, but this is the reality of what we’re dealing with,” stated Duggan during his press conference.

“I’ve been listening to complaints all day, from restaurants in Detroit, from casinos in Detroit, saying “we’ve done a good job, we followed the protocols, we don’t have any outbreaks in our restaurants and casinos, why does the governor’s rule have to apply to us?” continued Duggan. “But, the reality is, she has to treat us as a region. What I have to say, and there is no doubt about this, is City of Detroit businesses are being shut down now because of irresponsible behavior in the surrounding communities.”

Duggan’s comments come as data shows that on Oct. 21, the seven-day positive infection rate was around 2.5 percent in Detroit compared with a Wayne County total of 5.4 percent, Oakland County standing at 5,7 percent and Macomb County at 8 percent. Since that time, rates have risen in Detroit to 6.8 percent, while Wayne County sits at 12.6 percent, Oakland County at 13.1 percent and Macomb at a staggering 17 percent.

Stressing that medical services could soon be overwhelmed, Duggan also announced that the city would resume testing for all Detroiters, regardless of if they have insurance.

Testing for Detroiters takes place at the Williams Recreation Center at 8431 Rosa Parks, Monday through Friday, from 9 am to 5 pm. Those looking to take part may call (313) 230-0505 for a next-day appointment and results are expected within 24-48 hours.

The Detroit Health Department will also be partnering with the Henry Ford Health System to institute rapid testing for residents and staff at Detroit nursing homes. Additionally, the department will also conduct testing at all homeless shelters, warming centers and K-8 schools that remain open.

The health department also asks residents to report businesses that refuse to comply with the new lockdown restriction, noting that fines up to $1,000 are possible.

As the months move on, further updates around COVID-19 and lockdown measures will be provided. Subscribe to our newsletter for regular updates and watch Duggan’s complete press conference here.