Ted Velie of Michigan House Throws Us Some of his Sounds

There are Some Stupidly Talented People in this State 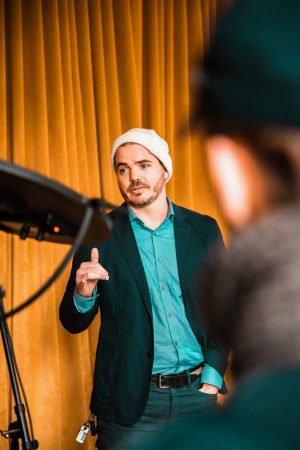 If you’re in Michigan and you’re at all into music, you’ve heard of MIchigan House—even if not in name. They’re the entity responsible for helping local talent like Flint Eastwood, The Go Rounds and Michigander make their way to SXSW, something that might otherwise be a cost prohibitive venture. They’ve been organizing the Michigan showcase for over a handful of years, and the party keeps getting bigger and more sophisticated each year: ie. more bands, more sponsors.

The group built a name for themselves after organizing an experiential popup of Michigan performers and artists at Art Prize in Grand Rapids, also home of Michigan House. Like Veile himself, it’s hard to grasp the full breadth of what they do, especially since at this time of year SXSW is such a big part of what they do.  Whatever it is it keeps Velie traveling across the state each week, meeting with various cultural heads, spearheading various collaborations.

Before meeting Veile, I didn’t think of cool things happening in Michigan outside of Detroit and Ann Arbor, save a handful of coffeeshops and a favorite art museum—and my friend Graham in Kalamazoo, who I was totally convinced was the only interesting person in that city before Jack White bought that mid-century house which he may or may or not have sold.

After a few hours with Velie I was a.) fairly certain I didn’t bore him and 2.) stoked on Michigan due to Veile’s enthusiasm and the fact that he is a cultural savant who doesn’t talk unless he has something meaningful to add to the conversation or can quietly tear you apart with samurai ease. Case and point: everything below. He can weave Salinger quotes into a conversation that make you feel like you’re 14 and discovering Raise High the Roofbeams, Carpenters & Seymour: An Introduction for the first time. And fuck! Wasn’t that magical?

I forgot to mention the furniture business. Veile designs furniture. Or did. I can’t keep track.

He made a playlist of Michigan music that is more than good. I’m humbled.

CV Henriette: You grew up in Grand Rapids. You left. You returned. How has the city changed during your time away?

Ted Velie: Oh, man, let me count the ways. Growing up in GR wasn’t bad, but it was definitely on the sleepy side. It felt a long way away from places where things and culture were happening. When I left at 18, I didn’t expect to be back for any length of time. Life’s funny, though, and I’ve been back for long enough to see the way the city has been changing. More than just the obvious stuff you can see from the highway. The real cool thing is that it’s slowly but surely – too slowly for sure – it’s becoming a more inclusive city. That’s what’s going to make us a lot more interesting one of these days.

CVh: Did you stay in Michigan for undergrad? What and where did you study?

TV: Yeah, I went to UofM. I mostly studied having ‘too much fun,’ but I somehow managed an Economics degree along the way. I had plans of double majoring in American Culture as well, but the tick-tock of four years made me decide that one major was plenty.

CVh: Your first job out of college was working for MTV in NYC. Do I have that right?

TV: Yeah, I moved to NYC without a job or place to stay. I crashed in my buddy’s parents basement in Pelham, NY for a couple weeks. I got the job at MTV through a temp agency and eventually got hired on full time. It was a hell of a great time to live in New York, but the MTV job was pretty blah honestly. I used to tell people that my job got exponentially cooler the farther I got away from New York. My friends back home kept waiting for me to take over for Carson Daily or something. It definitely afforded me a chance to see a ton of shows and do all the New York things. I got my money’s worth out of those years and I had the credit card debt to prove it.

CVh: How has the music industry changed since your time at MTV?

TV: My first job at MTV was in the video archives. We were literally digitizing old MTV/VH1 footage and helping producers put together all those old clip shows – “I Love the 90’s” “The 100 Hottest Hotties.” We also were listening to music all day – taking turns choosing what we’d listen to. Some of us still were bringing in CD’s to play. I used to bring an external hard drive that had a couple GB’s of music on it. At the time I was at that job it switched entirely to web radio and Pandora. Obviously things changed pretty rapidly after that.

I will say that even back then we all bitched that MTV never played any music.

CVh: Interviewing you is difficult because your life has so many varied chapters. After NYC you moved to Denver to pursue an MFA in creative writing. Why the move?

TV: I was feeling pretty directionless. I was loving my life in New York, but I didn’t know where it was going. Despite my Econ degree, I had always wanted to be a writer and really had been writing since I got to New York. I signed up for a few of those Gotham Writers classes that they used to advertise on every corner in New York and just loved it. I met a group of writing friends and we used to meet up in this bar in the Village to workshop our stuff. It was cliche as fuck but I was feeling it. At some point, I applied to a bunch of MFA programs. I got into Colorado and got waitlisted at Columbia. I wanted to stay in New York so bad, but the economics just weren’t realistic. Econ degree to the rescue.

CVh: Has writing always been a part of your life?

TV: Reading always has been. Writing was always an ambition, but it never came easy to me. It’s always been work. Good kind of work, but still work. I need to use my whole brain to be a decent writer.

CVh: How have your studies served you?

TV: So I have this favorite quote. It’s typically angsty white dude – i.e it’s from Salinger – but I do love it:

“Keep me up till five because all your stars are out, and for no other reason…Oh dare to do it Buddy! Trust your heart. You’re a deserving craftsman. It would never betray you. Good night. I’m feeling very much over-excited now, and a little dramatic, but I think I’d give almost anything on earth to see you writing a something, an anything, a poem, a tree, that was really and truly after your own heart.”

It’s from Raise Hight the Roof Beam and that last part: “write a something, an anything, a poem, a tree. ” That’s kind of how I think of what I do today. I still write everyday, but I think of the stuff we get to do with Michigan House and all the talented people we get to meet and give a platform to – I think of that was writing my tree.

CVh: Who are some of your favorite writers?

TV: Oh, man. I love a bunch of the old heroes: Salinger, Roth, Baldwin, Woolf and Fitzgerald. I used to say that Richard Yate’s Revolutionary Road was the perfect novel but it’s been a bit since I read it. More recently I really have loved novels by Jennifer Egan, Zadie Smith, and Colson Whitehead over the last couple years. Oh and Midnight’s Children by Salman Rushdie is pure magic. And Murakami can do no wrong

TV: Write a something, an anything, a poem.

CVh: Like many adults, you returned to Michigan for reasons not entirely under your control. Did you ever imagine becoming so enmeshed in this place?

TV: Nope. It took me a while to be okay with being back. I hadn’t realized how much of my ego was tied into being a guy who didn’t live near home. But then at some point I noticed something – there was a lot of cool shit happening all around me. It didn’t matter that I wasn’t in New York or LA or Portland – this shit was undeniably cool. Somewhere in that realization was the tiniest kernel of my part in Michigan House’s origin story. Apparently I wasn’t the only one having that realization.

CVh: Which leads us to—Michigan House! What is it? How did it start?

TV: Imagine an earnest grin and a firm handshake as I say this: Michigan House is the Great Lakes State’s experiential embassy to SXSW…and beyond 🙂 Sorry that’s my pitch. So this March will be Michigan House’s fifth trip to SXSW and our fifth mission to bring all the amazing energy we see around us down to that big international stage. The idea was originally hatched by one of my co-founders, Jamie Kirby, and our pal/lawyer Joe Voss after they had a chance meeting on the way back from SXSW 2014. It’s morphed and changed some since then but the idea remains the same: there is amazing, innovative stuff going on here and we’re trying to build a platform worthy of it all. On a practical level that means we create a Michigan-centric venue in Austin during SXSW. Then we program the hell out of it, connect a bunch of amazing people, learn a to, listen to incredible music, and hopefully come back a little different.

CVh: Tell us about your work at SXSW. Should I go this year? Who should I make sure to see?

TV: A lot of people ask us why we go to SXSW. Like why not Coachella or Burning Man or something else. The really cool thing about SX is this really cool convergence of industries and people and talents. One of our goals is to give interesting pals – like CV – a home base within the madness.

So should you go? Of course you should go. But you should definitely go with some intentionality and you should reach out to us to find out what we’ve got going on and where you might find something cool and interesting.

CVh: Michigan’s music scene: tell me about it.

TV: I’m loving Michigan’s music scene right now. There are some stupidly talented people in this state at the moment. The cool part, though, is that they’re also builders. They’re making an impact with their music for sure, but they’re also impacting the culture and the scene. It’s a very cool moment on a statewide level. You can go to a music festival in the furthest reaches of the UP with Graham Parsons & the Go Rounds. You can find incredible local music in Flint, TC, GR, Midland, Kzoo, Lansing, you name it. Or you can just discover the powerhouse that is Detroit and learn about somebody new every weekend. It’s pretty great and I think it’s going to get better.

CVh: What’s next for you?

TV: Talk to me after March.

CVh: What’s next for Michigan House?

TV: Talk to me after March.

CVh: What questions did I forget to ask?

TV: I’m a libra. My Enneagram number is disputed. And, yes, I do like long walks on the beach.