Detroit Works But Not On Labor Day. Happy Monday!

From Picnics to White Tower Burger and Wonder Bread. Some Reflections on a Holiday 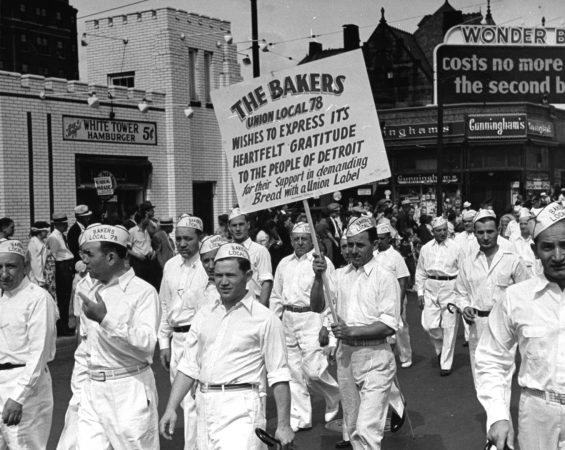 Labor Day Greetings from Detroit! Today we celebrate the dwindling days of summer in picnic and reflect on the achievements of the world’s workers by rooting into the gratitude of a Monday off WORK.

We labor to rest. More importantly, many have labored before us so that we can rest.

No preaching here, but might we suggest taking a moment of your time off to learn about Detroit’s ties to the global labor movement—and to remind yourself that free time is a luxury. Pop into the DIA and ask a docent about Diego Rivera’s murals. Or pick up a book. Perhaps Detroit: I Do Mind Dying.

Or seek out someone who used to work at the Wonder Bread factory when it was still in Corktown, before Spaceship Casino landed. Ask them about how the neighborhood, and the city, has changed.

The photo above is from Detroit’s Labor Day Parade In 1938. That was the year Time Magazine sent photographer William Vandivert to Detroit to catch the parade—long before techno, we lived by the mantra “live hard, party harder.” Nothing says business like a freshly tailored garment.

Look closely at the photo above. Look at the sign on the castle looking building in the corner that reads “White Tower Hamburger.” WTF? No, that is not a typo. Back in the 1920s, a White Castle knockoff emerged out of Milwaukee, Wisconsin. Its thing was serving five-cent burgers during the Great Depression, in the days of typewriters when people still used the “cent” key. When is the last time you used the “cent” key? Where is the “cent” key on this Mac?

One last White Tower Hamburger still stands in Toledo, Ohio. And we’re not even salty. Because White Castle isn’t even from Detroit. The chain started in Wichita, Kansas. They did, however, bring on Impossible Burger, so bonus points for that.

Back to Detroit. We’re late for the picnic because we’re lost on the computer—but not too lost to take this moment of leisurely musings for granted.

Happy Labor Day to ALL.