Is This a New Day For Detroit? 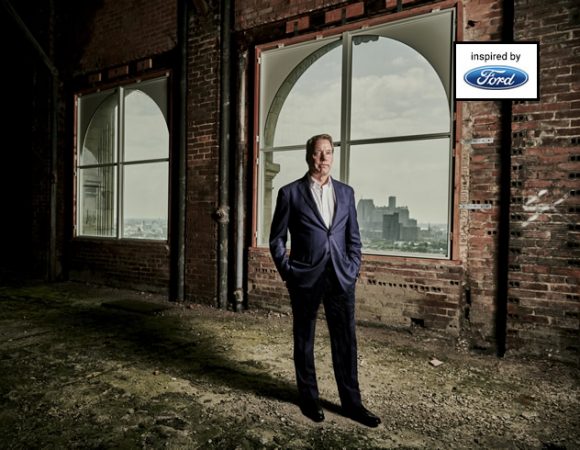 Detroit seems to have been down this road before. Last month Ford a unveiled a mission to redevelop Detroit’s looming symbol to ruin porn, Michigan Central Station, a structure the city gained world renown for the recently coined term “urban exploration.” Could yet another plan breathe new life into decades of speculation about the massive structure’s future: A casino? A convention center? Police headquarters? Proposals for the Beaux Arts-style building, which opened in 1913 and moved as many as 4,000 passengers daily during its heyday, have come and gone over the years, arriving and exiting as quickly as the freight and passenger trains changing tracks in Corktown.

A postcard depicting Michigan Central Station, circa 1955. At its peak, trains bustled in and out of the station and served approximately 4,000 customers per day. Photo Detroit Historical Society

Few buildings in Detroit inspire as much conjecture as Michigan Central Station, a poster child for both urban decay and an architectural monolith – one of the city’s most significant structures. Its glory days long gone, the 18-story station now sits abandoned in the city’s Corktown neighborhood, a constant reminder to all its neighbors of what once was. It has become such a constant that it’s now less of a talking point and more so part of the new normal.

But this time it seems different. A new day has dawned on the future of the structure, because a formidable player has arrived: A Fortune 500 company with grandiose plans for the 500,000-square-foot building and the surrounding neighborhood, deep pockets, and, if sentimentality holds any weight, historical ties to the city.

Ford Motor Co. is betting on both the future of the automotive industry and the city, with the recent announcement of its purchase of Michigan Central Station.

What Ford envisions is this: A refurbished Michigan Central Station as the anchor of a two-acre campus dedicated to advanced automotive development.  To break it down, we’re talking about how we drive and get around in the city. Our mobility. Autonomous, self-driving vehicles and shared transit.

While its focus is on its automotive future, Ford is also looking to further revitalize an already newly energetic Detroit neighborhood. The 2-acre campus will be the centerpiece of a mixed-use landscape of offices, retailers and housing. The company sees the station as an accessible destination with initial plans to the open the lobby to the public.

Ford mobility headquarters at The Factory in Corktown. Photo Katai

The vision is already moving beyond the drawing board with what Ford has set up as its first shop in Corktown. Its electric vehicle and autonomous vehicle business teams have been working in a nearby refurbished factory. Some 2,500 Ford employees will call the campus home by 2022. Another 2,500 workers are expected to join the economic hub as part of the plan to support complementary businesses in the area.

The vision, as Jessica Robinson, director of City Solutions for Ford Motor Co., explains, is a vibrant neighborhood with people pedaling down bike lanes, shopping and dining at neighboring Detroit-based venues, walking through the “beautiful grand hall” of Michigan Central Station, while Ford and other companies test vehicles and new technology on adjacent streets. Seems to have the inklings of what we may envision an actual smart city to look like.

This is a pivotal moment for the city and the automotive manufacturer as both are looking to attract top talent while laying claim to a competitive race with Silicon Valley, as the automaker bets on the future of the industry.

Ford Motor Company welcomes the public inside the lobby of the iconic Michigan Central Station for the first time since its closure in 1988.

“What I find particularly interesting about the Michigan Central Station at this moment of history is the impact of place,” Robinson said. “Locating a company in a city center, there’s no better place to pursue those initiatives and pave the way for the future of mobility … lots of things become possible when you have a campus in an urban environment.”

Inspiring, yes, but also strategic. Ford and Michigan Central Station will be at the eastern terminus of a developing autonomous vehicle corridor in the state. Running along Michigan Avenue, that corridor stretches westward to Ford’s Dearborn headquarters then to Willow Run, home of the American Center for Mobility, a testing and product development center for mobility, then further on to Mcity in Ann Arbor, the University of Michigan’s research and testing center for wirelessly connected and self-driving cars.

“I think now there is a chance for us to start to really understand in our home community the power of technology and together, we can improve people’s lives,” Robinson said.

Ford envisions the restoration of the main lobby in Michigan Central Station as a community gathering spot including a variety of local retail and restaurants offerings. Conceptual rendering shown. Courtesy of Ford Motor Company

In many ways, Ford’s footprint in Corktown is a tribute to the company’s long history of innovation, beginning with the moving assembly line at its Highland Park plant, still standing, and the development of the massive, self-sustaining River Rouge complex in Dearborn — where everything needed to make a car was created and on hand.

While in the early phase of conceptual plans, Ford sees opportunity for community groups and local businesses to be a thriving part of the Market Hall experience in Michigan Central Station. Conceptual rendering shown. Courtesy of Ford Motor Company

The Michigan Central Station returns Ford to the city in a formidable way, further accelerating the city’s renaissance, which has largely been placed in the hands of Quicken Loans self-made billionaire Dan Gilbert and the pizza and entertainment conglomerates owned by the Macedonian immigrant Illitch family.

Ford’s plans have stirred the emotions of thousands of Detroiters, many of whom expected a looming wrecking ball on the horizon. For the unveiling they showed up in droves, waiting in line for hours for a glimpse inside the grand waiting room, with its marble floors and 54-foot ceiling. Many came with faded photographs and family memories.

Sentiments, Robinson, a Detroit resident, shares. “I can tell you personally that is a very proud moment for this city to see a building that has in many ways looked at us every day and reminded us of the challenges of the past.  For Ford, it’s really exciting to be part of a defining moment in the city’s comeback. There’s a lot of emotion tied with that move.”

Seems the city may just be headed down a different road this time.