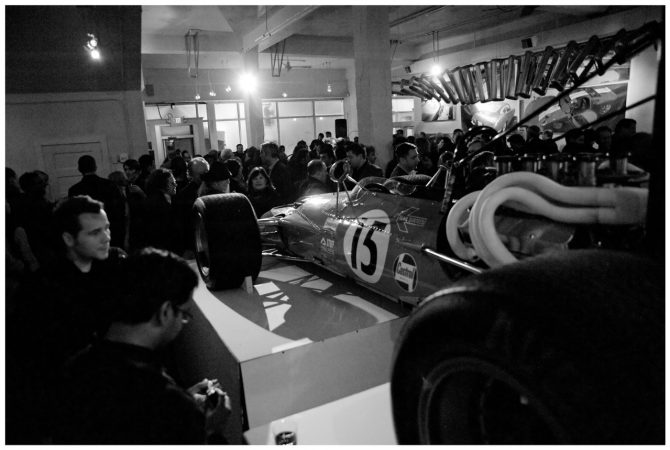 Camilo Pardo is best known as the “rock star car designer” responsible for the 2005 and 2006 Ford GT. In the automotive world, that makes him a hero. For the rest of Detroit, he’s known as that car guy, and sometimes fashion designer, with the racing jacket who’s thrown epic parties in his downtown spot before downtown was a destination for cereal milk lattes.

When I tell my flat-mate I interviewed him she recalls a story from the rave days where he spent three hours painting her “head to toe, fully nude” for a party at the infamous nightclub Bleu. Followed by sunrise at The Works, an after-hours that was, and is, as legendary as it is nefarious.

Cars have always been cool—and, let’s face it, something of a man’s game, but It’s Pardo’s lens of equal passion for design, fine art, and entertaining that make things interesting. And worth noting, safe. My flatmate had nothing but positive memories of her time working with him.

For the past 20 years he’s hosted the Auto Show sanctioned Detroit Auto Designer’s Night AKA the preferred party of designers who are in town and want to chill in style after spending all day in a stuffy convention center.  See some art, hear some jazz … At this point, the party draws its own exclusive crowd of names who fly in for the night to catch the hybrid art exhibit.

With last weeks official announcement that NAIAS is moving to June in 2020, we can only imagine how this brand will appeal to a larger audience. Because, up to now, a convention center event, plus thousands of people, held during Detroit’s most miserable season isn’t exactly a fresh recipe for bringing out the masses. Which makes one think how would the scene have involved without Pardo?

Spend any time talking to him and you understand there’s a depth to his merrymaking as he cites Dada and Surrealism as party influences while explaining the frustrating logistics of moving a formula one race car in the snow. Could Camillo be to the Auto Show what Detroiters are to Detroit? The heartbeat that sustained life during the more difficult times? Is Summer NAIAS a sign that the Zeitgeist has finally caught up with him?

CP: 1965 P4 Ferrari. Even a reproduction contemporary version would be cool.

CVh: If you could only drive one car for the rest of your life what would it be?

CP: I prefer mid-engine cars. I haven’t driven a 488 Ferrari. I’m not how it compares to the 06 Ford GT. The GT is so nice to drive—it’s hard to beat.

NYC was great back then. There was a lot going on. I’m very happy I spent the beginning of my life there.

CVh: You went to CCS?

CP: Yeah—and I would have left Detroit when I graduated . . .

My goal was to get the hell out of Detroit. Either go to Europe—I had done an internship in Europe—or go to California, but the best offers were from GM, Ford or Chrystler.

CVh: That seemed to work out well.

CP: Ford offered me the job. They said if you want to go to Europe, we’ll put you on a four-year rotational program. We’ve got studios in Italy, Germany, and England. That sounded great to me. That was awesome. And it simply continued. It didn’t stop.

CVh: You work primarily as an artist now?

CP: No. I still design. I’ve done some work for a company in Shanghai. An electric concept. I did another concept car that was a small, local commuter. I’ve been working on a little speedster, and aircraft for the last seven years on and off, and now it’s really kind of heavy.

We also host the auto show party at my studio. Designer’s Night. Last year was the 20th anniversary. Twenty years of doing that. Kind of crazy.

CP: The coolest things have been the cars that we show. It’s really shocking to me that we get some of these cars on display. We had one of Carroll Shelby’s Cobras that he lent Steve McQueen way back in the day. That Cobra had fantastic history and it was restored to a concourse level. One time we had a John Surtees Formula One car driven by David Hobbs. Another year we had a 1977 Williams Formula One car. It’s shocking. For the automotive people to come in and they’re like “What the hell? What is this car doing here? How did it get here? That’s always great.

CP: One of the biggest ones, and we’ve had a few big ones, was in 2002 when we introduced Ford’s GT concept car. We were sponsored by Ford at the time.

CVh: Was that the one you designed?

CP: Yes. I was the designer.  That was the first delivery of the vehicle to the public. They had never seen the vehicle. We had been working on it for a couple years—quietly in a studio.

I had asked Ford to help us on our second year because I wanted to get Syd Meade—who’s a futurist. He’s the designer of Tron, Blade Runner, 2010, Star Trek. Some amazing movies. And he was a designer at Ford many years ago.

CVh: That was at your place?

CP: At some point we outgrew my place. Ford decided to have the parties elsewhere. That was the second year, and we had it at the Rooster Tail on the Detroit Riverfront. It was probably the biggest one. We got Dan Gurney’s GT40 the car that won the Le Mans. The car was shipped, lifted, and put through the windows of the Rooster Tale.

CP: I got kind of tired of the whole auto thing. I’ve been coming out with all these auto themes for the event over the years. We had a committee that would meet and I said let’s do something more abstract, something more on the fine arts side. Really give the designers something to remember.

Ford was into it. They wanted it to be a memorable designer’s night. They had plenty of cash flow at the time. Everyone was celebrating.

We made it a Dada movement. Salvatore Dali. Marcel Duchamp. Man Ray, Fellini. They had these crazy movies. Black and white. We tried something new. We blew up these giant weather balloons and projected movies on them, so the movies wrapped around. They were huge. They looked like planets.  We kept them real low, so you could basically touch them.

We showed only vintage Jaguars. We had four different Jaguars on these wild, round carpets. Zebra, leopard…

CVh: What’s it like having a party in Michigan in January?

CP: I have photos of us, pushing the Formula One Car in the back, in the snow. We had to be prepared for excessive snow removal. My studio is pretty large. To integrate the back of the building where I keep the cars, with the front, all the doors have to be open and the place freezes.

Winter is as inconvenient as anything could possibly be—and to mix in with an auto show, it’s just miserable. It can get down to three degrees below zero. That’s cold. It’s rough. I call it uninhabitable. But the show must go on.

The weather has a huge impact on the environment and the atmosphere of what you’re doing.

CVh: The show is now moving to summer. What caused that?

CP: I don’t know why they’re moving it. It’s too good to be true. I have a ballroom upstairs I’d love to use for receptions that we sure as hell can’t use in the winter. If it’s two degrees outside, it’s two degrees in the ballroom.

CVh: Does this mean your parties are going to get better?

CP: I think so. It’s the beginning of a new era.

CVh: Do you see this is an attempt to attract a bigger audience?

CP: This is a way to bring in a new energy for sure.

CVh: Speaking of new energy. You’ve been in Detroit along time—

CP: Yes, longer than most of my friends have been alive.

CVh: Did you ever think they’d buy the Train Station?

The fact that they purchased the train station represents recovery to me. Thank God that they’re getting their feet back into the city.