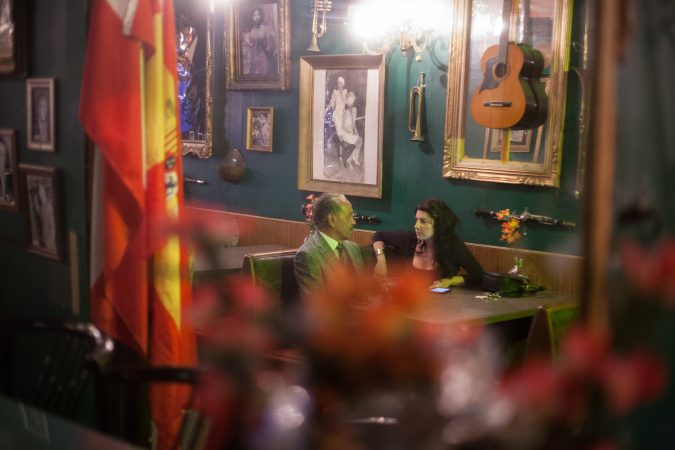 I first met Larry Mongo 10 years ago at Café d’Mongo, a few months after he opened what he refers to as “the club.” In those days, and for years after, he only opened his doors on Friday nights. This was before I moved into an oversized and under-priced loft in Capital Park–$500 for 2,300 square feet! Before I learned about the Isaac Agree Detroit Synagogue.

A collection of micro-apartments and a burger joint, newly opened Lovers Only, has replaced the old neighbors. Dancers who, on Friday nights, would place carry out orders for chicken and ribs Larry grilled himself, that’s what Thursdays on the front sidewalk looked like then.

The decor of Cafe d’Mongo’s is not traditional. Pianos hover over patrons on the ceiling, old news clippings adorn the walls, and trinkets are just about everywhere. Photo by Stephanie Hume

Larry Mongo sits at the bar, telling patrons about his love of music and Detroit. Photo by Stephanie Hume.

Courtney Henriette, of Takoi, and Larry Mongo have a long history. Courtney worked at Cafe d’Mongo’s before taking up the task of creating Takoi. Photo by Stephanie Hume

It was an honor to sit down with the man who would become my mentor and ambassador to Detroit, as he has for many newcomers to the city over the past 10 years. In quintessential Larry Mongo style, a short series of questions, became an hour of conversation and eyebrow-raising details. Like the part where Mongo basically said I started the club and I’m still not sure what the deal is with Ryan Gosling.

In similar Larry Mongo fashion, he imparts deep and painful truths between jokes, always reminding us to scratch beneath the surface. And take nothing got granted.

CVh: Most people tend to assume you grew up in Detroit. Where did you grow up?

CVh: What was your connection to Detroit? Why here?

LM: Was probably the Fox Theatre. I was impressed with the Motown Review. It was really the first time I saw tall buildings, I fell in love, and I knew I could never go back to the suburbs. Never. So, starting in 1964, every weekend, every free break, I was downtown meeting the hustlers. It was fascinating to me because out my way there were no tall buildings in the suburbs. It was rural, everybody knew everybody.

It was really only country people. But I came down here, and I saw all types of black people, all types of white people. In those days, you heard foreign languages.

What fascinated me the most: everybody in the city was trying to make money. Either selling stores or hustling in the street. Making money fascinated me. I came from a family that believed in making money, but this time I was on my own. I wasn’t working for my father or uncles or aunts. I was on my own, and I wanted to make my own money. So that was it.

CVh: When did you move to the city?

LM: I moved to Detroit when I got married in 1968, we moved to Mary Grove and Indiana. At that time that was a well-off area. Mainly a young, Jewish area. In between Mary Grove and Puritan, between Wyoming and up to about Stoepel.

CVh: How did you meet your wife Diane?

LM: It was an arranged marriage. I was 18 months old, and Diane was 9 months, crawling. I peeked in her diaper to see if she was a boy. When I saw she was a girl, her mother saw me and said: “Well he did seen her, that’s her husband.”

My whole life, so help me, growing up I was always told I was going to marry her or one of her sisters because the families wanted to unite.

CVh: You started dating when you were teenagers. Where did you take her out?

LM: Oh, man. I believe in going first class. In those days there was still a lot of segregation in Detroit, places where black people could not go. We could not sit on the main floor of the Palms Theatre. What do they call it? The Fillmore? I didn’t know it, so when we get to the window – ’cause most blacks went to The Fox, I took her to the Fillmore – and they told me to get in the balcony line.

Then I noticed all the black people were in a certain line. I said, “No, I want to be on the main floor.” The lady said, “You know the rules. You get over there and get a balcony ticket.” It so happened I was with some of my friends from Oak Park. They took up for me.

But then the manager came out and actually told me “You know what the rules are.” What are they talking about? Then he say, “Where do you live?” Oak Park. And these were his exact words. “Is your father a lawyer or something?” He looked at the lady selling the tickets, and he said “give him a main floor ticket.” But we could not go past the first row once he walked in.

During intermission, the whole main floor was black, and they was pointing at me and Diane, saying “they sitting on the main floor. That’s the couple.”

I had no clue. I always took her to nice places.

Musical instruments and photos in elaborate frames line the walls at the speakeasy. Photo by Stephanie Hume

CVh: Tell us about your children.

LM: My kids were raised in Lafayette Park and Indian Village. They went to private schools. They lived a very private life. My sons had never went to a concert and sat on the main floor. They always used to sit in suites.

They lived an unusual life. I never would forget–one year they asked me, “Can we sit on the floor?” What you mean? They said, “we just want to be with the crowd.” They wanted to see Michael Jackson from the main floor and not from the suites.

On Diane’s 30th birthday, I gave a concert. I had Prince, SOS Band. I think it was called the Revolution or something. At Joe Louis Arena. I had Prince and everybody singing happy birthday to her.

That’s the life they grew up in.

CVh: Both your sons left Detroit for careers in larger cities, New York and Chicago. If they were coming of age today, could you see them staying in Detroit?

And the key is, the way you can diversify now. The way you can walk up to any white person or any black person with an idea. That way you all integrate. It’s amazing thoughts you all are getting. You be amazed how many white kids had the answer, but the big missing part of their question, a black guy had the answer to. But they were never allowed to meet that black guy.

CVh: What is now Café d’Mongo, your son ran as Wax Fruit in the 90s. Tell us about it?

LM: Wax Fruit is where Eminem, Kid Rock were — I threw them all out before they became famous.

Then he opened the Hip Hop Shop.

CVh: It’s been 10 years since you opened Café d’Mongo. What’s changed both culturally and physically in the last ten years since you’ve reopened your doors?

LM: You know what’s changed the most to me, and it’s kind of painful? When you was here and all us, ten years, even five years ago, there was so few of us, if you saw a person two days straight everybody said “hi”, and if you saw them on a second day, in a week, you introduced yourself and introduced them to places to go, things to do. We were a family. Seriously. We were truly a family.

But once civilization has come, which we need, that’s the money, now, everybody is almost like “do I know you or should I know you?” No one speaks. No one look people in the eye. Everybody is self-important.

Five years ago, the top restaurants in this city was here 10 years ago. Roast, Chef Andy. Wright & Co., Chef Marc. You know who helped truly build this place? Phil Cooley and Slows.

We were pollinators. Dan Gilbert and them, they paid attention to us pollinators, and he followed. That’s why I thank Dan Gilbert, he got it. He understood what he was looking at. And I tell you who else got it. Bobby Taubman.

I opened a place with a lot of faults. People saw the art in it.

LM: Do you know he almost got kicked out of school?

CVh: He was in the Mickey Mouse Club!

LM: Well, yeah. He came for my birthday 3 years in a row.

We also asked Larry what his top ten spots were in the city.