Presidential Candidate Mike Bloomberg posted up at The Eastern to talk his Policy, Ideas, and no Tweeting in the White House 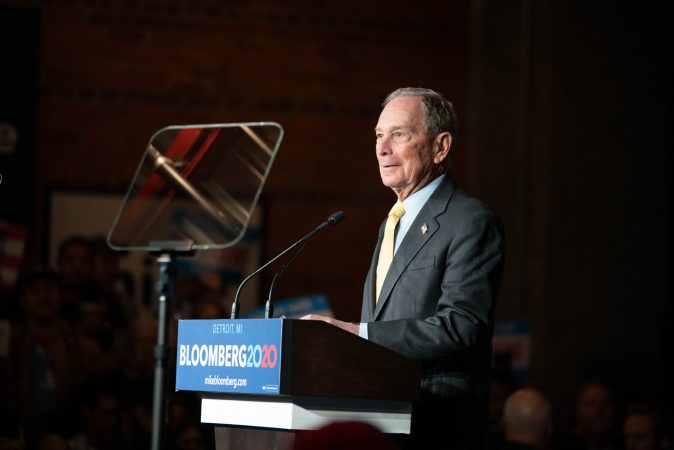 Mike Bloomberg was full of smiles and jokes while holding another press meet and pumping up his policies briefly in Eastern Market on Tuesday afternoon.

While people may not think of Mike Bloomberg as “Mr. Funny,” he had quite a few jokes up his sleeve with the opening remarks. He noted that he hoped people saw his Super Bowl commercial and added that he had no clue how much it cost. Speaking of cost, that’s been a constant when it comes to the concerns surrounding Bloomberg’s campaign: many believe he bought his way into the election.

Bloomberg’s position, however, is that he is the man to beat Donald Trump in the overall election. Playing off of the “I Like Ike” design from Dwight D. Eisenhower’s 1952 Campaign buttons, many donned an “I Like Mike” shirt or button, and a gallery of onlookers watched and cheered to the right of him, and to the left and front was packed like sardines full of press.

Mike took the opportunity to lay down some of his qualms with Trump as a whole, including the following quip:

.@MikeBloomberg says that @realDonaldTrump insults do not scare him, and that he’s never backed down from a bully. (📸x @acronymofficial) pic.twitter.com/tvi6l1U4bM

He also made a campaign promise, “No tweeting from the Oval Office.”

Bloomberg feels he’s the right guy to get it all done – but what is his IT? There’s a lot of buzzwords that political candidates tend to throw around, so time will tell what the actual platform will be. And it’s safer, honestly, for the American People to research each candidate, what they’re saying they will offer, and what they’ve previously believed in during their political careers, and keeping track of those ideals when the Democratic Nominee has been decided.

Some of the platforms Bloomberg shared included:

And while those talking points are what most of us do want to hear, it will be the question of what in this list is in control of Bloomberg, let alone any candidate. Implementation is important, and you can have the best of intentions, but the follow-through is what counts.

The real meat of his political sandwich, and where we’ll leave you as a reader, was this very prominent quote:

“That’s why I’m running because somebody’s got to stand up for every American who lost their job, lost their insurance or can’t pay that college tuition. Donald Trump has tried to bully a lot of these people over the last three years. He’s not going to bully us and we won’t let him bully you either. Now tonight, the President will deliver a State of the Union address. He’ll say the State of the Union strong, and we all know it is that our union is divided like it has never been before in our lifetime. Because let’s face it, we have an angry, out of control, lawless president, dividing the American people and abusing his office. And we just can’t afford another four years of this. So let me be clear, I am running to defeat Donald Trump.”

Time will tell who ends up being the Democratic Candidate. As of 4 AM Thursday Morning, the results lead Pete Buttigieg,
Bernie Sanders, and Elizabeth Warren as the Top 3 in Iowa, according to The New York Times. Mike Bloomberg ranked at #8, Joe Biden at #4, and Andrew Yang at #6.

Amy's, AKA ACRONYM, experience ranges from photographer, writer, director, designer, events curator at select Detroit venues. She is fluent in Social Media strategy, promotions, and concert Reviewing photography with photos and bylines on 'High Times Magazine,' 'Merry Jane,' 'The Oakland Press,' 'The Macomb Daily,' and over 60 Beasley Media Group Radio Station sites across the U.S.. Keep up with her adventures at @acronymofficial on Instagram and Twitter.

On Dating: Happy Valentine’s Day! To Me. And You