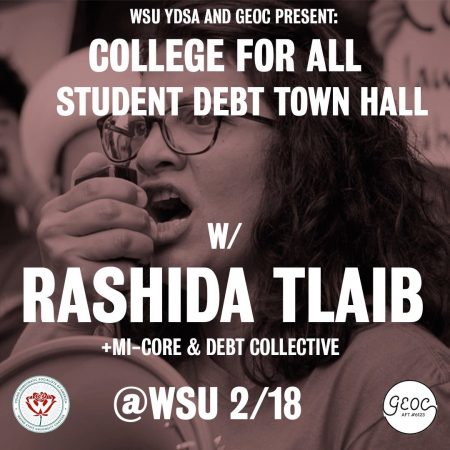 Student debt accrued from student loans and financial aid in the United States sits at about $1.7 Trillion and continues to grow. While not an issue for those more fortunate, a large portion of younger Americans have seen their life put on hold as they struggle to pay off their debt working multiple jobs, in some cases, for wages that do not pay enough to help them off their feet.

One reason for an increase in debt is the cost of college, an aspect that has seen an increase of 213% for public universities and 129% for private institutions, according to a study by Student Loan Hero, working off of statistics from The College Board. Meanwhile, the same report states that wages have only risen by 67%, making it harder for college graduates to pay off their newly accrued debt.

While some in Congress have brainstormed how to handle the growing crisis, there have been little to no solutions thus far beyond ideas from a few members of the Democratic Party. Representative Rashida Tlaib, who has made erasing student debt one of her core principals, joined in a town hall organized by Wayne State student organizations with support from groups such as the Detroit chapter of the Democratic Socialists of America and the Sunrise Movement, to talk about what is do be done in the face of so much debt. 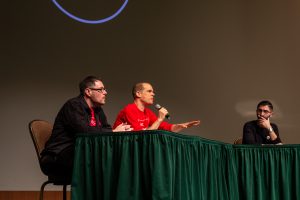 Tlaib was joined for a short question and answer session by Hussein Beydoun of the Michigan Caucus of Rank-and-File Educators labor union as well as Thomas Gokey and Robbie Thribble of the Debt Collective advocacy group. The speakers addressed the hike in overall tuition costs, while also making their points in support of legislation leading to the erasure of all student debt.

“They tell us we can’t afford the mere millions it would take to give mobility driven tuition-free economic prosperity to the people. We had tuition-free college in this country already, this isn’t new. We have spent trillions upon trillions on the Pentagon. They cannot tell us what’s not possible after the money they’ve hemorrhaged,” Shared Robbie Thribble, of the Debt Collective, in his opening remarks.

The debt collective, of which Thribble is a member, is a member-based organization aimed at assisting those in need with disputing their debt through community organizing while also fighting for a college-for-all program. Through their efforts to organize and fight back against unjust debt, the end goal is to bring communities together to create economic conditions where everyone can thrive.

As tuition has risen exponentially over the past few decades, and the opportunities for cheaper higher education became more complicated, Thribble rooted the argument for canceling student debt in those points.

“When we say cancel student debt, we get mocked and ridiculed, taught to pay our debt to society to risk dying in some war. We ask our children to die for our country for an affordable education with the GI Bill, to serve in Iraq and Afghanistan, and they go home with this,” shared Thribble. “We are witnessing class war, and this is also generational war. Whether we like to admit it or not. We must cancel student debt now and reassess why we put one generation at chains of debt while ignoring how affordable we’ve once made higher education for our elders.”

Thomas Gokey, echoed Thribble’s remarks during his opening address, calling out what he believes is an unjust system, and encouraging people to join the fight toward tuition-free college. Gokey rooted his argument in the fact that wages have not risen proportionately with basic services such as the cost of living, and the overall cost of college tuition.

“As we work harder to produce more and more wealth and are more and more productive, our wages have flatlined since the late 70s,” shared Gokey, pointing to a chart he displayed showing the slowdown of wage growth, “Now, this wouldn’t be a problem if our basic necessities have also flatlined also, but that’s not the case. The cost of housing, health, education have all caught up, and we’re forced to make up the difference with debt. There are some people who make some bad decisions, who are irresponsible and wind up in debt. But that’s not most of us. Most of us are forced into debt not because we live beyond our means, but because we have been denied the means to live.”

Hussein Beydoun, who is a teacher and member of M-CORE, rooted his belief in his time spent as a k-12 teacher. He believed that just as we fought for the right for equal access to k-12 schooling long ago, we must also fight for equal access, and tuition-free college so that all seeking an education have the right to do so.

“We decided a long time ago in this country that free k 12. Public Education was a social right, and it is our public schools that we socialize students and nurture them, broaden their horizons, help them resolve conflicts, and help them find their passions. College-for-all takes all that to the next level, and the research is crystal clear about the benefits. College graduates committed fewer crimes, are less reliant on social welfare programs. They generate more taxes but beyond just all college graduates and more engaged and active citizens who vote at higher rates than non-college graduates, “shared Beydoun. “Ask yourselves, don’t you think our society will benefit if more people from working-class neighborhoods were in college? Don’t you think that students in our classrooms will be a lot more interested, engaged, and motivated if they knew there wasn’t a financial barrier stopping them from chasing their dreams after high school? Knowing all the benefits I just described doesn’t it sound like the only argument against college is that you just don’t want poor people in college?” 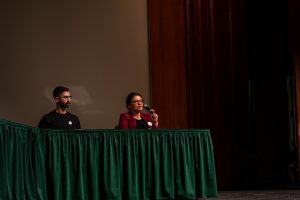 During her opening remarks, Tlaib used the opportunity to express support for the college-for-all legislation she recently signed onto. She believes that the student debt crisis is a racial justice issue, one that certainly affects her own district, and one that she is committed to fighting against.

“I don’t know about you guys, but this corporate socialism that I continue to see constantly, not only the bailout of the big three, which was important but also the sense of looking away and allowing people to get lower wages on the plant at the plants are not to be able to leave with a retirement package or any of those things. The fact of the matter is that we’re choosing these forms of giving away our tax dollars to those that are welcome goes, I don’t need it the most. And I see this happening all the time, especially in my district, which are public communities, Shared Tlaib.

“I mean, yes, Wayne State is part of my district, but the majority of my folks live in poverty. I have a third poorest congressional district in the country,” she continued “So college for all and student debt cancellation would be transformative for my residents, it would completely give them access to opportunities and that form, I think of government, helping and being a partner, making sure that people have access, I think is key in transforming these structures that I believe, are very much racialized and are very much oppressive to so many of our folks.”

After their remarks, the speakers took questions from those in the crowd, many of whom had student debt of their own or were worried about the potential debt once they graduated and or attended college. Before the talk began, those attending were asked if they had student debt with the purpose of estimating the total student debt of the room, of which was calculated to be roughly upwards of $4.2 million just for the few hundred people who packed the auditorium.

Some of the questions brought up included how to better communicate the need for college-for-all to people who may not be in support of the legislation, and what is to come in the face of private student loan debt. In the face of the second question, Tlaib pointed out that Congresswoman Ilhan Omar and Sen. Bernie Sanders did release the Student Debt Cancellation Act of 2019, which would see the purchase, and then cancelation of all private debt. A full live stream, including all questions from the Q&A, can be found here.