Edie Demaj of Rocket Fiber is All Wired Up 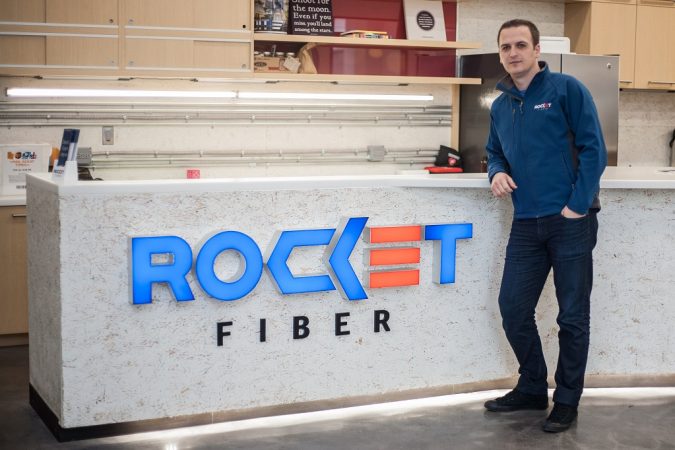 Detroiters pay $50 per month for slow speeds and abysmal customer service from national telecom conglomerates. If only there was an entrepreneur willing to save us from the fiber optic nightmare.Good news, Detroit: There is. Edie Demaj, along with co-founders Marc Hudson and Randy Foster, recently launched Rocket Fiber, a high-speed Internet provider molded after Google Fiber and offering speeds that far exceed Comcast.

After three years, the group and its 54 employees outfitted downtown and Midtown with some of the nation’s fastest Internet speeds.

While the zipping speed and friendly service alone are reasons to cheer, Demaj’s backstory is one that should be told, especially as the nation explores new ways to tighten its borders. An Albanian immigrant who escaped a civil war, Demaj did what many immigrants do when they arrive in America – he improved his life, the U.S., and the country he left.

13-year-old Demaj and his family fled Kosovo in 1999, just as Serbian leader Slobodan Milosevic’s bombs began to fall on civilians and the war criminal undertook a campaign of genocide designed to flush Kosovo of Albanians.

The Demaj family’s escape is something out of a movie: They left home at night with few belongings, literally dodging bullets along a harrowing trek to the Macedonian border, Demaj says. His mother gave him and his brothers cash to stuff in their underwear in case the family separated, but they encountered a sympathetic police officer who let the Demajs cross the border. Once there, they charted a course for the country that offered the most promise and potential – the U.S.

Demaj found his groove in U.S. schools, learning in a real classroom that, for the first time in his life, offered a chance to look at a blackboard “without worrying about getting killed at any second.” After school, he began working for Grand Sakwa, one of Detroit’s largest real estate developers, learning skills that would help him land a job at Dan Gilbert’s Bedrock Real Estate Service.

That eventually presented the opportunity to be a part of the group that would launch Rocket Fiber as a means to increase the Internet capabilities of the entire downtown Gilbert kingdom. It worked so well that expansion plans are in the works and expected to be announced later this year.

Now in his early 30’s, Demaj is already one of the city’s top entrepreneurs. He lives a classic American Dream tale and has seized an opportunity that he says is easy for those born here to take for granted. However, Demaj is grateful, and the new lease on life spurs his ambition.

“When you live in the U.S., one of the things you forget is how amazing the country is. We wake up here, do things, and go to work every day without problems or worrying, and we think it’s normal to have the all these rights,” he says. “I came from a country that’s dealing with a war, so to have the ability to do anything that you dream of as long as you work hard – I don’t need any more motivation than that.”

While Demaj’s story is dramatic, the general narrative isn’t rare in Michigan, where immigrants are landing and contributing to the economy at a higher rate than most other states. That’s paying dividends and boosting Detroit, not just for immigrants, but for those born here.

It isn’t hard to find a dearth of stats to support that. Consider that in 2011, immigrants launched 28 percent of U.S. small business startups, while “New Americans” (defined as immigrants to the U.S. and their children) were responsible for more than 40 percent of the 2010 Fortune 500 companies, employing more than 10 million people worldwide.

Why are immigrants so successful in Michigan? Demaj says the simplicity of starting a business in the U.S. and Detroit is partly driving their success, and while there are certainly issues with race, it’s generally possible for anyone from any background to launch a company.

He adds that Michigan and Detroit are especially attractive options for those moving to the country because Detroit’s state of transition offers even more opportunity than other major cities.

“You can have a huge impact and be a part of Detroit’s comeback without needing $5 million to start a company. Here, you can do it all for much less,” he says. “People come here from areas where they didn’t have opportunities or many chances to do things. In Detroit, there’s a better chance to come and succeed and be able to take care of your families.”

Not only is Demaj taking care of his family, but he’s also investing in Albania, where he helped launch Gjirafa.com, a popular search engine, and he continues to invest in a wide range of startups.

“I’ve been fortunate to have the opportunity to live in the best country in the world that offers more than any other country on earth,” he says. “That means a lot to me, and I want to give back to a place that needs it, share these experiences, and give them a little money to help them grow their businesses.”