Owner and Curator of Orleans + Winder, Erin Wetzel, Calls All the Fashion Shots 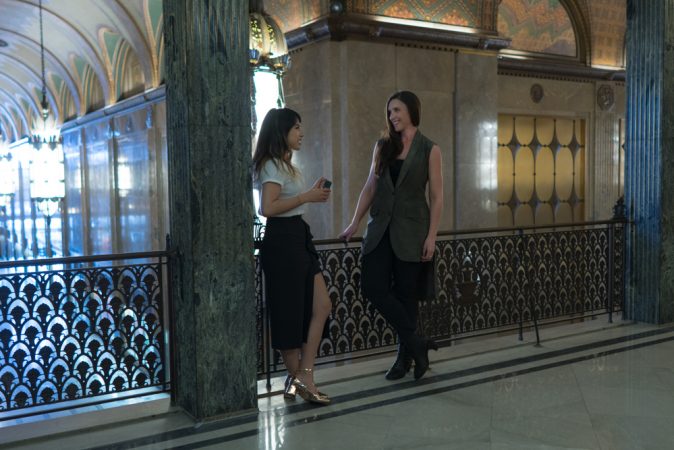 Meeting in front of Detroit’s iconic Fisher Theater, Erin greeted me on time, and in all black. Her art centric boutique, Orleans + Winder, in Detroit’s Eastern Market, displays an eclectic collection of avant-garde items. With clothing, candles, and accessories, the shop embodies a strong extension of her own personal style.

Erin and Nancy at the Fisher Building

Nancy Nguyen: What are you wearing today?

NN: Take me ‘there,’ why is the Fisher Theater your place of inspiration?

EW: The Fisher Building embodies Detroit iconic architecture and is a beautiful representation of Albert Kahn’s work. Also, my background is in theater, and I love and feel very at home in this kind of space.

NN: I know you studied at The University of Michigan, are you from Ann Arbor?

EW: I’m from a small town called Grass Lake, Michigan, but I’ve always longed for the city. I went to college in Ann Arbor Michigan, and it was a nice layover for me until I moved to France.

NN: Was France where your passion for fashion began?

EW: Absolutely. It changed me completely in a way that elevated aspects of my life. The lifestyle embodied quality over quantity and I tried to hold onto that when I returned. I try to go back for the Shows in Paris for Fashion Week. I was there this past March.

NN: How was it this year?

E: It was amazing. I usually go for a solid week. but this year I was there for only four days. It was a quick trip, and I knew exactly what I wanted for this year.

NN: Who do you think had the best collection this season?

EW: Uma Wang – her show was astounding. She’s fairly new on the scene in the states, yet she’s already garnered a great cult following. This year, her work was just so lush in baroque aesthetics and velvets. She had things I didn’t think would work for everyday, but I found myself saying “I want that” to every outfit on the runway. Lucky me, that was actually her first show in Paris, since she usually shows in Milan.

NN: Is it exhausting going to fashion week?

EW: You know, you’re the first person to ask me that! Yes, it really is. There is something about Paris that makes you want to look pulled together. However, when I step out to grab a baguette at the cafe, I’ll just throw on jeans, a white tee, put my hair in a bun – I feel very Parisian in those moments! What’s exhausting is going to the showrooms and making decisions very quickly when you want everything. Since I’m also our buyer, each season I pick out what we want to curate for the upcoming season. It is exhausting, but in a good way; I can get overwhelmed, and inspired with such beautiful people and the artistry.

Erin and Nancy at the Fisher Building

NN: What is the meaning behind the name of your store Orleans + Winder?

EW: We named the store for the crossroads where we live and where the idea for our concept store was conceived.

NN: What is the process behind buying for your store? Do you curate according to what you would wear, or do you pick what you think your customer would like?

EW: Honestly it’s a little of both. When I started, it was about me. It was my brand and what I was trying to exude. (I had to make everything I was passionate about cohesive in the lines that I would carry and the pieces themselves.) However, as I’ve begun to gather clients that I grew to know, I’ll go into showrooms and know what my clients would enjoy and personally buy for them as well.

NN: Is that why your store isn’t just fashion, but a lifestyle?

EW: Of course! I try to find unique artisanal things that you don’t see anywhere else.

NN: What is the first thing you notice about a person in what they’re wearing?

EW: Their shoes. Over the years I’ve learned so much about what goes into making a pair of shoes that it’s the first thing I see. I think shoes present a very telling perspective about a person and their lifestyle.

NN: Who is your favorite shoe designer?

NN: Who are your style icons?

EW: It’s changed over the years. When I was a teenager, I loved Winona Ryder. Now it’s Patti Smith, especially since she’s gotten into fashion!

NN: Being from Detroit, are you excited for this revival of the city?

EW: I am. It’s becoming this vibrant place. When my family and I head downtown, now there’s so much more to do, with so many more people walking around. Detroit is on this constant evolution, but I hope the focus remains on the mom and pop shops. Not the chains, but the people and retailers that are really doing something here.

NN: Do you have a favorite fashion decade to which you’re drawn?

EW: I’ve always been drawn to the 1920s. Fashion for women became less constricted, with trousers and shorter dresses coming into play. I admire the new freedom and opulence of that decade.

NN: What’s your perfect outfit to wear on a date with your husband?

NN: Do you influence what your son wears to school?

EW: I was able to influence my son’s wardrobe up until about 4th grade, but now it’s a bit more challenging. I try to buy distinct pieces (Levi jeans, nice tees, a pea coat), but he actually has a style of his own developing that includes way more color that I would wear. I love to watch what he puts together on his own.

NN: When you were younger did you plan your outfit for the next day before you went to bed? Or was it a spontaneous last minute morning decision?

EW: I love planning my outfits for the next day the night before! I always have and always will. It makes me feel more centered going into my day. Since my wardrobe has become simpler and more curated, this too has become easier.

NN: What’s that one “go-to” uniform you always feel your best in?

EW: Absolutely black pants, black tank, and an interesting shoe. I love minimalism, with an exquisite fabric, something that feels good on my skin. I don’t wear a lot of jewelry, so shoes are my statement piece.