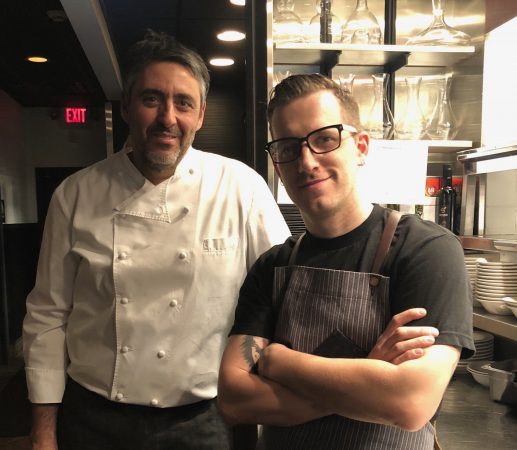 The moment I met Chef Luciano Del Signore I knew he was one of those chefs with a poetic fondness for produce. The type who smells/touches everything and spends his day wandering farmer’s markets—who cooks at home on the regular. Which is, I promise, rarer than you’d image. I, for instance, once lived with a well-regarded chef who only ate pizza and White Castle at home. He hated poetry.

After fifteen years, Luciano’s first establishment, Bacco Ristorante, is still the place for fine Italian cuisine in all of Metro Detroit. He’s that chef who has in some way influenced most of the notable chefs working in Detroit today—and probably many other cities, considering the number of young culinary talent who’ve passed through his mentorship en route to bigger markets. In Part One of this series we interviewed one of those notables, Chef James Rigato of Mabel Gray. Here he interviews his friend and mentor.

Suggested reading for: aspiring chefs and anyone who dines at restaurants.

“In my twenties I would have chosen and would have loved to work for Chef Jacques Pepin and Chef Julia Child.”

Chef James Rigato: You waited until you were 37 to open your first restaurant. Many cooks and chefs are in a rush to do it as young and fast as possible but you seemed to do the opposite. Why?

Chef Luciano Del Signore: I was very content running my family’s restaurant and banquet center until I reached my mid-thirties. I then had a desire to open a restaurant of my own, to put my own signature on it. All of the experience that I gained from running my family’s businesses insured my own success right from the beginning.

CJR: There is a certain level of scrutiny from not working under big name chefs when it comes to the fine dining world. But in Detroit it seems to add to our  resilience that we never left to do so. If you had left to cook under a chef in a larger market, who would it have been?

CLDS: In my twenties I would have chosen and would have loved to work for Chef Jacques Pepin and Chef Julia Child. I had a complete and total appreciation for the simplicity and practicality of their cooking styles. If I was a young chef today, I would look to Chef Eric Ripert from Le Bernardin. I think he has flawless execution at every level of cooking and hospitality.

CLDS: My preference would be for a Michelin One Star venue; it usually feels less pretentious and has a motived chef who is working hard to get his second star. Make no mistake that I don’t have a huge appreciation for what it takes to become a Michelin Three Star – I do.

CJR: You’ve played host to numerous chef collaboration dinners over the last couple of years. Is there a favorite dinner you’ve done? Why?

CLDS: Young Guns 6 – Top Chef Addition! This event included Mei Lin, Adam Harvey, and Melissa King. It also included one of our favorite Chicago chefs, Ed Sura, as well as local chef and Eater Young Gun Garrett Lipar. This event was an amazing dinner for 150 guests who enjoyed six courses that were flawlessly executed. These dishes were some of the most creative and perfectly balanced plates that I have ever had the pleasure of witnessing in my career. We also had an amazing weekend entertaining our visiting chefs, with, of course, a legendary after party that cemented lifelong friendships.

CJR: What was your best meal in the last year?

CLDS: Smyth in Chicago: an incredible 21-course tasting menu that was meticulously paired with incredible wines. It was topped off with a cheeseburger for the 22nd course from The Loyalist, their casual venue in the lower level.

CJR: Where do you see yourself in 10 years?

CJDS: My plan, if it’s executed well, will be to slow down considerably in 10 years’ time, and travel to amazing food cities around the world and EAT. But I still plan on being involved in the hospitality industry in some way—or fashion perhaps—as long as I’m still relevant and can continue to please people, because this is what truly makes me happy.

CJR: As the Detroit food scene continues to expand, what do you love about the growth? What do you dislike?

CLDS: I love that the majority of the food scene expansion here is happening in the city of Detroit proper, not the connecting communities or suburbs if you will. And for a lifelong Detroiter like myself, this is truly a dream come true to see my city thrive and grow!

I dislike the “gold rush” mentality of first-time restaurateurs who are trying to capitalize on the excitement of new-found traffic, and who are bringing mediocrity to the table of their establishments.

CJR: What’s your advice to the young cook who wants to be a successful chef?

CLDS: Make sure that you’re in it for the love of food. Make sure that you complete all of the lower level jobs perfectly before moving onto being a cook. Dishwashing, prep cook, porter, bussing, and food running gives you the foundation needed to be successful on the line. Stay focused on the cuisine you love. Decide what type of cuisine it is that makes you happy. Then research that cuisine implicitly and travel to that part of the world where the cuisine comes from and spend enough time there to give you a true understanding of that cuisine. Support local products. Support your peers. Work closely with other restaurateurs to create a strong union—bond and promote each other. Pay more attention within your own four walls, then look outward. Many chefs spend too much time trying to copy a successful restaurant, rather than creating their own style. Eat out at great restaurants on all of your days off for inspiration