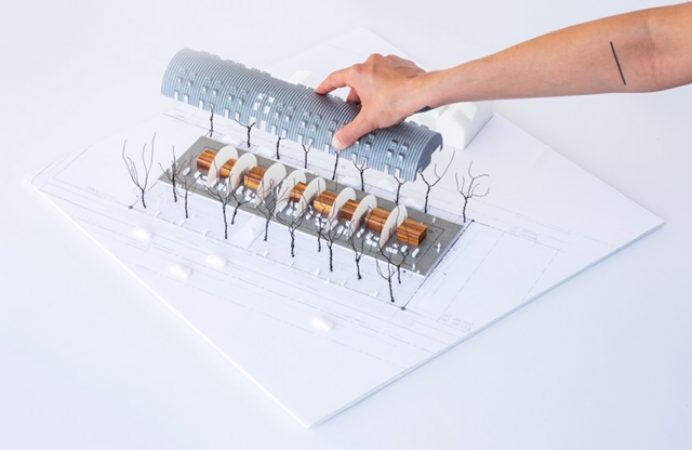 Ishtiaq Rafiuddin is the design mind behind Detroit restaurants Takoi and Magnet. His latest project to be unveiled is Santo Santo, a car wash on Detroit’s east side turned a disco yoga studio.

Trees emerging from concrete, old buildings taken to their bones and reimagined with moody lights and sleek shapes—his work is easily recognizable. And by no means limited to Detroit.

His portfolio includes a private apartment equipped with a helicopter pad in Mexico City.

The Bangladesh-born and NYC raised architect honed his skills in Istanbul, where he had the unique opportunity to work on projects that gave him rare hands-on experience. Many architects never touch the buildings they design.

And some architects don’t have the opportunity to design buildings until much later in their careers.

Due to the perfect storm of his own ability to solve problems on-site, the affordable cost of building in Detroit, and a close collaboration with the eccentric developer Philip Kafka of Prince Concepts, Ishtiaq has the freedom to take chances and create spaces of which most young architects can only dream.

And quite frankly, we’re all better for it.

Ish recently relocated his team, Undecorated, from NYC to Lafayette Park Detroit. We caught up to talk origin and concept.

CV HENRIETTE: THIS IS THE SECOND—WELL, MAYBE SECOND AND A HALF—RESTAURANT YOU’VE DESIGNED. TAKOI BEING THE FIRST. WHAT CHALLENGES DID YOU ENCOUNTER WITH TAKOI THAT PREPARED YOU FOR MAGNET?

ISHTIAQ RAFIUDDIN: Yes, second and a half! One of the challenges in Takoi was learning about the production that goes behind the kitchen and restaurant. It was important that the bar and kitchen perform but also important to put them on display. Or on stage.

Secondly, we decided to do an all booth restaurant in Takoi. This includes two, four, and six-person booths and one twelve-seater communal booth.

This was an idea we challenged ourselves with because we wanted a dense and energetic experience in the dining room. It was great to see it perform after Takoi opened to the public.

CVh: HOW DID THE PROCESS FOR MAGNET START?

IR: It started with Chef Brad and Philip’s desire to open a second restaurant with a radical idea for food and drink. It is a cuisine that is Detroit inspired and Detroit invented with the challenge of cooking everything with solid fuel.

The kitchen consists of a wood-fired oven and a wood-fired grill. Everything pretty much cooked with that. The kitchen is designed as an open kitchen that essentially highlights that. You can feel the fire from the dining room.

The bar sits about 30 and the bartenders are sunken, to allow for greater visual connectivity for everyone. There is fixed booth seating surrounding the bar on the two sides.

And that’s essentially the restaurant.

CVh: WHAT IS YOUR RELATIONSHIP WITH THOSE WHO WILL BE USING THE BUILDING—BOH AND FOH STAFF? WHICH IS TO SAY, WHAT IS THE ROLE AND SCOPE OF YOUR COLLABORATIVE PROCESS?

IR: I worked closely with Philip, Chef Brad, Drew Pompa the bar manager, and Christina Ponsaran the general manager in creating the experience, as well as the performance behind the kitchen, bar and front of house.

They are all essential to the project and brought a lot of thought and constructive feedback to the project. There are so many elements in the project that was specifically tailor-made to their requests.

CVh: HOW MANY TIMES DID REAL LIFE TAKE YOU BACK TO THE DRAWING BOARD?

CVh: HOW DO YOU WANT US TO FEEL UPON ENTERING?

IR: I want you to feel transported to another place, to feel inspired, to feel open, connected to the energy of the space and people there.

CVh: AS SOMEONE WHO’S TRAVELED EXTENSIVELY AND HAS LIVED IN DIFFERENT COUNTRIES, WHAT MAKES DETROIT UNIQUE? TO DESIGN? BUILD? LIVE?

IR: Detroit is incredibly fascinating. There is no place like Detroit in the world.  It has a unique culture and history that is edgy and not indoctrinated. It’s authentic in every sense. It has incredible resources both natural and human. Because of this, I believe Detroit has a very interesting future ahead.

CVh: WHY SHOULD WE BE EXCITED ABOUT MAGNET?

Magnet is next to Core City Park, a parking lot turned into (looking onto) a park. The restaurant is designed so that everyone has a beautiful view of the park.