We Talk to WeWork Members Who Live and Work in Detroit 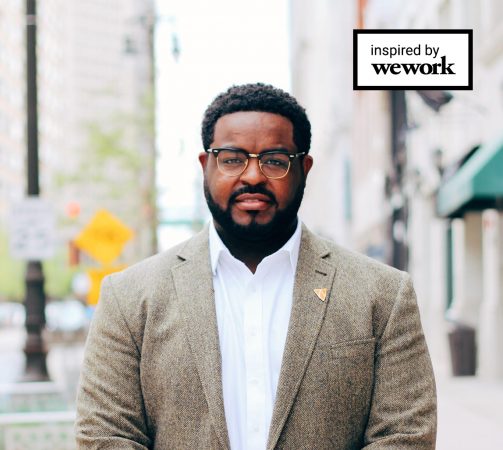 With so much history, change, and attention, Detroit is undoubtedly at a turning point, and people are watching. The world is watching.

Over the course of the next few months, you’ll hear from WeWork members who call Detroit home. Some of these folks may have grown up within the city proper, while others the surrounding suburbs.

What we realized is that it doesn’t matter where you grew up, Detroit, even with some of its proud bruises, has never lost its shine to those who call it home.

Kyle Steiner: Tell me how you saw Detroit growing up.

Ralph Walker: I had a good balance of life between Detroit and suburbs. I lived in Southfield a suburb not too far out of Detroit. A lot of family was still living in Detroit so I was able to experience being on the block, while going home to a comfortable house. Growing up I went to a predominantly black school. It was different. Being in Detroit, you see all these historic homes and the historic story of the city. Yet, at that age I didn’t value it for what it’s worth. I was so used to seeing it. It took me to move away and come back to see these buildings in the same condition, and think, “Wow, this is really beautiful.” My grandparents live in a 3,000 square foot home – that’s all I knew. I knew it was a big house, a nice house, on a nice block. Moving back, I initially thought I’d live in the suburbs, but instead chose Detroit. I never lived in Detroit. I had only lived on 7 mile and Gilchrist when I was younger which was pretty reckless at the time with shootings, or open fire hydrants and kids would just play in the street. My perspective on Detroit really didn’t sharpen until I returned three years ago. It’s then I saw how beautiful it is, and the vision for its future.

KS: Has the perception around the city changed?

RW: Yes, and the best way I can put it is beauty has evolved it to change. Although, I am scared for business owners here because Detroit is a slow-moving city. In Atlanta, as a faster moving city, there are things I experienced and gained know-how in that many businesses simply don’t have access to here. I’m afraid businesses from the outside are coming in and will take over if we don’t do our part. Digital marketing is well past a pretty website. There is a business side to the website companies need to think through. My instinct tells me the residential uptick will take ten years to return to speed, and business side five years. I have a strong vision for local businesses, and how I see them participating in the conversation; how they can be pillars, because an economy won’t thrive without small businesses and local shops. It really starts with us first, we need to provide the foundation. It’s my mission to educate the small businesses on what they need to create a stronger economy here in Detroit.

KS: As an adult it seems your perception of Detroit hasn’t varied much from that as a child, in always seeing the beauty in Detroit?

RW: I’ve always seen the beauty in Detroit because it hasn’t changed. Not that dramatically. You still see the same old buildings. Even the building we are in now is not a new building. We just didn’t see and take care of what we had. I took my drone up in a local area and I was blown with just how beautiful 7 mile is. I thought “Oh my god, this is right here.” I had no clue how beautiful a golf course was. Or the architecture of the homes. These aren’t regular roofs. You think, I can’t believe this is my city. I’m just so happy to know my kids are growing up in the city of Detroit. My kids are going to say I lived in that city you’re talking about. And I was there when it was coming back. That’s what they’ll know.

KS: You’re going to look at a house today. What does it mean to you to think about buying a house in the city?

RW: A lot. I remember when my parents were looking for a house in the city. They decided not to because of the crime rate, and instead picked Southfield. Now for me to do the total opposite of what my dad did and realizing he wishes we would have bought a house in the city. For them, and for many, at the time, it was the right decision. Schools were plummeting, and Southfield was on the rise. My dad grew up in the city, and moved to Southfield. I grew up in the Southfield, and moved to the city. Schools are still an issue in the city. My oldest son begins school this year and we need to think of how we provide a good education for him. Do we send him to Southfield? Do we get him a tutor to support his education in Detroit? We’re thinking how do we provide the best education for him.

KS: You see the rebound of Detroit, yet there is a constant undertone that there can never be a full rebound of Detroit without improvement to education. And you decide to move here, and figure it out. Do you think there is an understanding schools need to be fixed here?

RW: We were looking at the school ratings and nothing was above a 5 in the schools in the area (of 1 – 10). When you put a value to a residential area, how good are the schools is a critical component. What do the homes around the school look like. What are homes valuing at. I told my wife I have faith because I believe the city government wants to see the neighborhood come back. I don’t know when, but it will definitely be before our kids graduate. Maybe even before my son completes elementary school. The only way we make that happen is for people to be secure. One thing I say about growth is security is the number one connection to growth. What I mean by that is when people are scared they run. They tighten up their fists, and run. When you feel secure you’re free.

KS: So let’s switch gears a bit. Introduce us to what you do?

RW: Web design, internet marketing, and branding for companies. I’m doing it in a certain style, because there are not enough companies doing it like I do. One of the main things people tell me is, “no one answers the phone” at other places. That means there is no one connecting web design and actual life. Most people in this industry are robots. My clients come by and say, “My last web design company I worked with didn’t understand my vision.” One thing about Detroit is people like to shake hands here. They’d rather call. Come meet you.

RW: Moving back to Detroit. Bringing my business back to Detroit. In Detroit I can take more time with my clients. Atlanta was all about the hustle. How quickly can we get to the next project. Here, the accomplishment comes from being able to work and live in the city. To give time to new clients. I feel my company is a part of the advancement of this city. You don’t feel like we’re just building a website, I feel like I’m helping stabilize and improve these companies. If it wasn’t for being back here in Detroit, I don’t think I would have found the path to all these accomplishments. That’s the piece you don’t know until you move here.

KS: Name a Detroiter you’d sit down to an inspirational dinner with?

RW: One person came to mind that just passed. That’s Mike Ilitch. I’ll tell you why. After he passed, I did not hear one bad thing about him. Even my Uncle who was in the streets ran into him and told me he was the nicest guy. Plus, I’d like to learn the business mind. There is a special mind to build what he built. There were hard decisions to be made to make what he made.

WeWork is a global workspace provider, using thoughtful design and advanced technology to empower businesses of all sizes and industries. Book a tour at https://www.wework.com/ or email detroit@wework.com.