Rashad Jackson Gets to Work

We Talk to WeWork Members Who Live and Work in Detroit 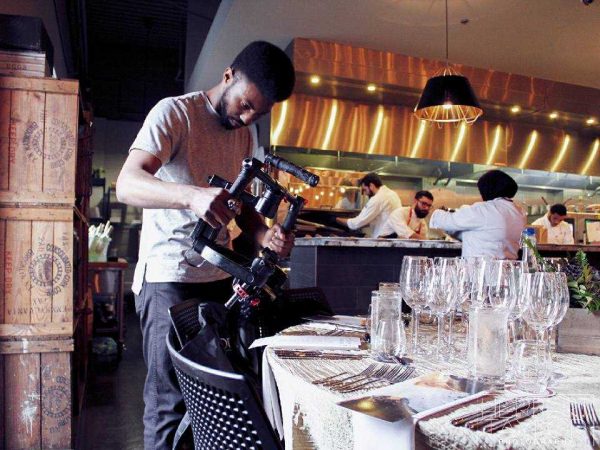 In this collaborative series we’re meeting with Detroit WeWork members to hear their stories and what it’s like to live and work in the city.

Detroitisit: How did you see Detroit growing up?

Rashad Jackson: Growing up I always saw Detroit portrayed in a negative light.

The only way to hear about cool or positive things going on was to be in the know. You had to know all the cool people. All the artists. The people that were making things happen. Other than that, it was just blanks— shut down neighborhoods and schools. Even our TV content looked awful to me. Anything from a news story to a car commercial to a festival going on in Detroit, the video looked terrible. That’s part of the reason my friends and I started SPC Monkeys. We wanted to help with that problem. We wanted to uplift the way people see Detroit.

DII: How has the perception changed?

I would like to be a part of the change more.

History is happening right now. I’ve watched parking lots close and become buildings. I’ve watched store locations leave that had been around for 20+ years. They’re gone now and have turned into yoga or smoothie places. It’s been interesting.

DII: Speaking of history—if you could make one change, what would it be?

RJ: I would love to see more interesting things to do in the city. When I was growing up I would hear my parents talking about how much fun they had in Downtown Detroit as teenagers. They had the Hudson Mall. They had the Princess River Boat. And the Amusement Park on Boblo Island. I would like to see things like that come back. More activities other than places to spend money. I love the new restaurants, gyms—and even the coffee places popping up. I love it all, but people need a place to park. If Detroit could fix that, it’d be awesome.

DII: If you weren’t in Detroit, where would you be?

RJ: Oh! I don’t know! I’ve thought about that quite a few times . . .  California, maybe. It’s warm and there’s a lot of production work.

DII: Let’s talk business. Tell us about yours.

RJ: SPC Monkey Productions is a video production company. Our services range from event coverage to larger budget projects like automotive commercials and short film. We try to be friendly with the budget. We filed at the end of 2013. It’s still a new adventure. New challenge. Looking back, my younger self was insane. We started the company with no money—my partner says with “Negative money.”

DII: Why do what you do?

RJ: Poor content is part of the why. The other part: My partners and I all went to Specs Howard. Then we all moved to NYC and began working. Weeks turned into months, and we took any gig we could find. We found out it was pretty easy to do video production. It’s not rocket science to operate a camera or set up lights or choose the right lens. When we came back to Detroit, we thought all the TV looked pretty bad. What if we brought everything we learned in New York here to Detroit? And we were having a hard time finding work. Getting hired to do something lucrative wasn’t easy. Especially as minorities in the industry. Often we show up to a gig and are the only black people on set.

DII: Why is that?

RJ: There aren’t a lot of black people that do this type of work. People don’t know what it consists of or where to get that type of skill.

RJ: Dealing with clients. We had no experience making a proposal, sending a proper email, pitching a sale.

RJ: I can’t say one accomplishment is greater than another—because every single win, even a small win, is one we’ve worked hard for.

There’s a production company in California called Revolt TV, and they’ve hired us a few times over the year. The last time they hired us was for a Flint Water Crisis event. And that’s when Stevie Wonder, Janelle Monåe, Dave Chappelle, and 20 other bigtime celebrities all came to Flint and put on a show to raise awareness for Flint’s water crisis. SPC Monkey covered all video that day. It felt good to be the exclusive video company among people I look up to like Stevie Wonder and Janelle Monåe.

DII: If you had to do something else?

DII: You’re inviting one Detroiter to dinner. Dead or alive. Who is it?

RJ: Roy Roberts. He’s a big time Detroiter. One of the most successful people I can think of. His influence in Detroit goes back decades. Acquaintances know him as great. Anybody who knows him is great. I strive to be one of those people.