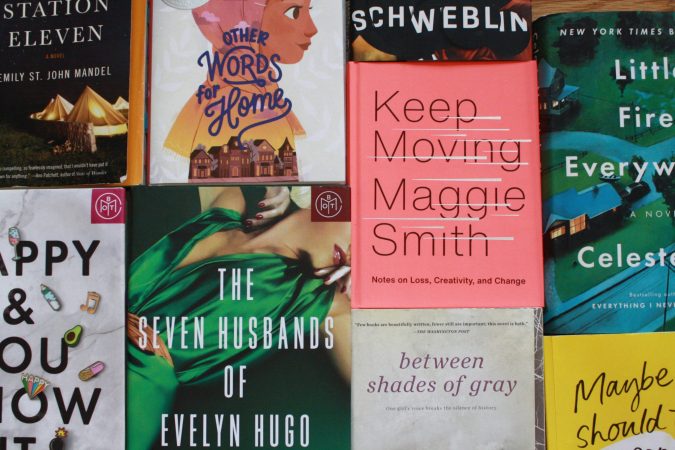 It’s Women’s History Month, and what better way to kick it off and distract ourselves from the paper anniversary between Detroit and COVID-19, than picking up a few excellent reads by female authors? From inspirational reads to historical fiction to mamma-group-drama, we’ve got you covered, dive in!

Self-help books are excellent for many, but for those of us who don’t enjoy being preached at, Maggie Smith comes to the rescue. Her words are genuine, calming, peaceful, and at points hard to hear–but exactly what is needed. Each poem, journal entry, and story she writes is close to her chest, offering solace in her words instead of a drill sergeant’s to-do list. “Keep Moving” is the type of book you immediately want to reread, and won’t forget for a long, long time.

“Think about geologic time: how the slightest shifts, imperceptible daily, carve canyons and make mountains. Trust that you are making progress even if you can’t yet see it.” 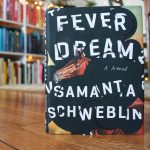 Aptly named, this thriller takes its readers into a script-like narrative and explores the thin line between a child’s safety and

imminent danger. Throughout this short novella, a dying woman in a hospital bed is forced by a young boy to recount the past days’ events. She is told not to leave out a single detail, because in the details lie the answer. What the answer is for, however, the woman doesn’t know. “Fever Dream” offers exactly its title’s promise in a twisting, mind-messing manner sure to lead you immediately in for a reread.

“We need to go faster.

Why? What’s going to happen when the time is up?

I’ll tell you when it’s important to know the details.”

Maybe You Should Talk To Someone By Lori Gottlieb

In “Maybe You Should Talk to Someone,” psychotherapist Lori Gottlieb realizes her own need to seek out a therapist after an out-of-the-blue breakup. Gottlieb’s writing style is witty and truthful as she explores stories of her patients that intertwine and contrast with learnings and digressions in her own therapy appointments. This book is an eye-opening, deep dive into the heart and soul of what it means to be unashamedly human.

“We tend to think that the future happens later, but we’re recreating it in our minds every day. When the present falls apart, so does the future we had associated with it.”

Clap When You Land By Elizabeth Acevedo

In Acevedo’s third book, she explores the lives of two estranged sisters, neither of whom knows the other exists. Camino lives in their father’s birthplace, the Dominican Republic, and Yahaira lives in New York City where their Papi resides with Yahaira’s mother. The two come to find out about each other through their Papi’s death and come to understand just how different their worlds are. “Clap When You Land”, a novel-in-verse, explores deep loss, love, poverty, hardships, and the fragility of life.

“Papi learned to swim in water that wanted to kill him.

That ocean can’t be so different; shouldn’t be any different.

If any man could take a hard dive & come up breathing,

it should be one who had practiced for just that his entire life.”

Happy and You Know It By Laura Hankin

Claire, a starving musician mourning the boot from her ex-band, is forced to accept a job as an infant playgroup musician for a group of perfect, young, and moneyed New York mothers. But the longer Claire works the gig, she realizes they may not be as perfect as they seem. In “Happy and You Know It”, Laura Hankin explores the clashing duality of new motherhood and single life, revealing everyone’s dark secrets along the way.

“That was one of the strangest things about motherhood. You could love your baby to pieces, be thankful every day for his ten tiny toes and his piercing wail and his all-consuming existence, and yet still mourn the life you’d had before.”

Between Shades of Grey By Ruta Sepeteys

“Between Shades of Grey” is a harrowing historical fiction about a teenage, Lithuanian girl, Lina, caught in the frays of World War II and Stalin’s Soviet rule. Throughout the novel, Lina and her family are forced from their homes in Kaunas, Lithuania, marked as traitors and criminals, and shipped in cattle cars to suffer out their punishment in Syria. Ruta Sepeteys spent years researching and interviewing Baltic (Lithuanian, Latvian, and Estonian) individuals who lived through this horrific time in history and based many of her characters and their discussions on real-life experiences.

“I shut the bathroom door and caught sight of my face in the mirror. I had no idea how quickly it was to change, to fade. If I had, I would have stared at my reflection, memorizing it. It was the last time I would look into a real mirror for more than a decade.” 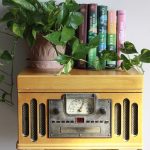 Shaker Heights in Cleveland is the perfect suburban model. Each beautiful home is filled with a beautiful family, and that beautiful family is offered the best education, after-school programs, and the safest neighborhoods. But as artistic, single mother Mia and her daughter Pearl move in, the suburb’s facade is stripped away as residents begin to question what a perfect home really is. “Little Fires Everywhere” delicately pursues the subtleties of expectation and reality and the heartbreaking chasm between the two.

The Seven Husbands of Evelyn Hugo By Taylor Jenkins Reid

Evelyn Hugo is the beautiful bombshell of Old Hollywood, the actress every woman wants to be and every man wants to be with. Now in her late 70’s, Evelyn wants nothing but to reveal all the secrets from her patchwork life, made through years of hiding the truth from the ever-encroaching press. Evelyn explicitly seeks out a not-so-very-well-known magazine reporter to transcribe her life into a book. But why reveal her secrets now? And even more importantly, why through the words of a seemingly random stranger?

“Evelyn nods. “Everyone I loved is dead now. There’s no one left to protect. No one left to lie for but me. People have so closely followed the most intricate details of the fake story of my life. But it’s not… I don’t… I want them to know the real story. The real me.”

Other Words For Home By Jasmine Warga

“Other Words for Home” is a middle-grade novel in verse, but offers a charming and heartfelt story that can be appreciated at any age. Jude, a young girl growing up in Syria, is suddenly sent with her mother to live with American relatives as her town becomes a hub for eruptive riots. Jude comes to understand what it is to live in a new country as she settles into America’s bright, shiny, and overstimulating lifestyle. But her love for her home, and for her family who remains there, never leave her thoughts.

and I hear the warning in my aunt’s voice.

That is something powerful enough to transcend oceans:

a mama’s ability to say something

without actually saying it.” 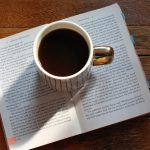 “Station Eleven” is suggested only to those who find solace in reading a tale similar to one’s current life. Throughout the novel, Emily St. John Mandel explores the outbreak of a deadly virus and its effects on the world. As more and more people are lost to the mysterious illness, the “old world” fades faster and faster, until only remnants of life as we know it is left. 20 years after the outbreak, the Traveling Symphony, a troupe of musicians and actors, is confronted by a devious prophet who threatens the peace of this new world.

“Jeevan was crushed by a sudden certainty that this was it, that this illness that Hua was describing was going to be the divide between a before and an after, a line drawn through his life.”

As always, “support local” is our mantra. The link for each title leads to a local shop to order or pick up from. If none of these reads pique your interest, check out Source Booksellers’ curated By & About Women selection.