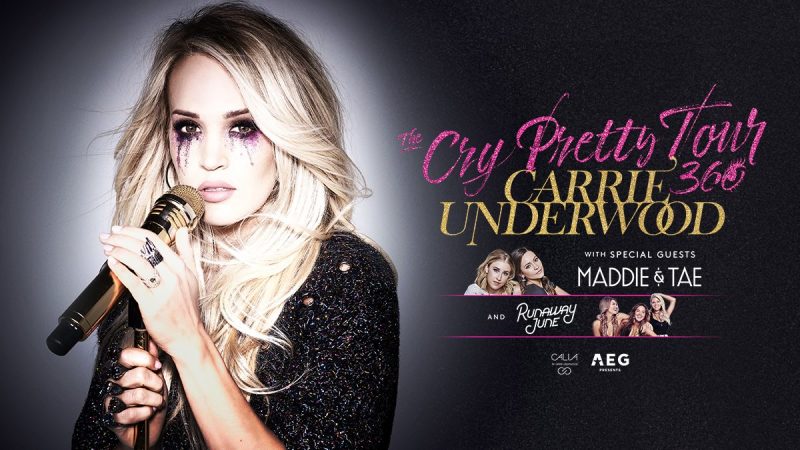 5 Shows You Must See This Week is a roundup of some of the best shows in the city, and this week we’re featuring our top 5 for October 28-November 3. Check back with us every week for the hottest shows and the greatest venues!

“Carrie Underwood emerged from the promise of her 2005 American Idol win to become a true multi-format, multi-media superstar, spanning achievements in music, television, and film. A seven-time GRAMMY® Award winner, she has sold 64 million records worldwide and recorded 26 #1 singles, 13 of which she co-wrote.” Carrie Underwood Facebook Biography

“A Los Angeles-based vocalist, producer, and sketch comedian, Oliver Tree brings a colorful, scooter-loving persona to his indie pop- and hip-hop-informed dance music. A native of Santa Cruz, Tree emerged in October 2016 as a featured performer on the single “Forget It” by hometown EDM musician Getter. That same month, he released his first collaboration with DJ Whethan, the compassion anthem “When I’m Down.” The song went viral, garnering millions of streams over the next year.” AllMusic.com Biography

“Toro y Moi was one of the first artists to be called chillwave due to the underwater, laid-back sounds of his 2009 single “Blessa,” but that tag was soon left behind as each subsequent record and project Chaz Bundick (later Chaz Bear) undertook headed off in an unpredictable direction. Whether digging into ’80s R&B, house music (on the Les Sins side project in 2014), space age pop, prog, or guitar-heavy power pop (as on 2015’s What For?), Bear is never satisfied to stick to a formula when he could experiment instead. Even when tapping into the mainstream zeitgeist, as on 2017’s modern R&B-inspired Boo Boo or the Daft Punk-meets-Frank Ocean 2019 album Outer Peace, Bear’s innate melodic gifts and sonic shapeshifting qualities always shine through.” AllMusic.com Biography

“Denver based Nick Miller, better known by his stage name ILLENIUM, has won the hearts of dance music aficionados worldwide through his captivating remixes and enthralling original productions. While there are a myriad of melodic bass producers on the scene, ILLENIUM has distinguished himself with his unrivaled ability to create immersive emotional experiences. Displaying an adeptness for creating aural arrangements that vary in style, beauty, complexity, and emotional depth, ILLENIUM’s impeccable sound design has truly established him as one of the best producers in the game. His stunning records come to life in his live show, incorporating keyboards, drum pads, and cutting-edge lighting and visuals, all of which combine to create an immersive experience.” Illenium Facebook Biography

“Take an adventure into the sea with Baby Shark as he joins his friend Pinkfong to sing and dance through some of your favorite new and classic songs! In this one of a kind live experience young fans will be dancing in the aisles as Baby Shark and his friends, go on fun adventures to learn about shapes, colors, numbers and so much more!” Baby Shark Live Facebook Biography

Amy's, AKA ACRONYM, experience ranges from photographer, writer, director, designer, events curator at select Detroit venues. She is fluent in Social Media strategy, promotions, and concert Reviewing photography with photos and bylines on 'High Times Magazine,' 'Merry Jane,' 'The Oakland Press,' 'The Macomb Daily,' and over 60 Beasley Media Group Radio Station sites across the U.S.. Keep up with her adventures at @acronymofficial on Instagram and Twitter.