Open to the Public, Open Your Attention to These Water Fountains Around Detroit for Some Water Appreciation 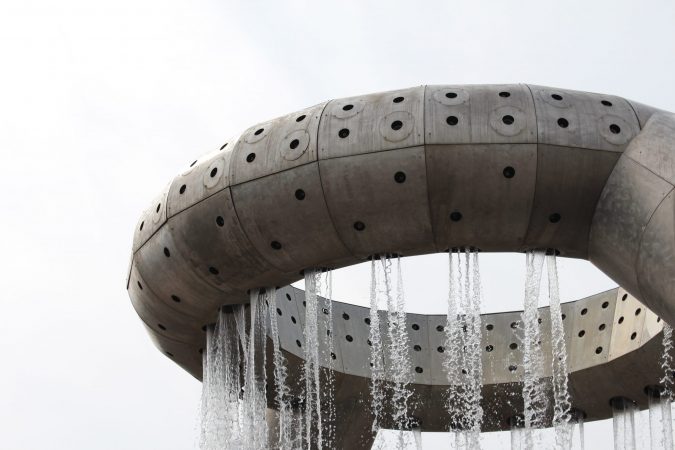 Water, water, water! Stay hydrated this summer in Detroit, but also stay up with the water fountains in Detroit scattered throughout the city. Locals often witness these fountains regularly as several are placed in hotspots. Structurally, they echo a blended harmony of Detroit history and urban city life. Detroit is made as solid as its fountains and monuments. However, the community has learned how to be more fluid when challenged by external forces.

This granite fountain contains about 100 water jets. Check out the natural show by viewing one of the strongest jets that harness the ability to shoot water over 100 feet in height. Completed in the summer of 2005, Woodward Fountain is the centerpiece of Campus Martius, Detroit’s central square. Many Detroiters will have already passed iconic water fountains like this fountain, but knowing more about it allows us to appreciate them more!

Leave it up to Campus Martius to be the focal point of numerous seasonal Detroit activities. The majority of the fountains in Detroit are physical displays of wonderful water sprays, but why not highlight a modern development that is just as free-flowing? Established in 2016, The Fountain Detroit offers a fresh approach to casual open-air dining featuring a full-service restaurant and bar. Urban beachside dining is an original discovery. Gather with family and friends in the heart of downtown Detroit. Grab a refreshing bite on your lunch break. Don’t get sand in your Beach Mac! Click HERE to view their site. 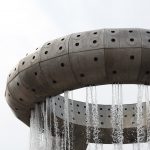 This stainless steel fountain is composed of two legs topped by a ring to the height of 30 feet above a circular, black granite pool. The Dodge Fountain is attractive for those looking for more stimulation. Stay for a while Downtown at the Hart Plaza. Anna Thompson Dodge, the wife of the late Horace Dodge, an auto pioneer, gave the city $1,000,000 for the construction of a fountain in the memory of her late husband. Thanks to the ingenuity of famed architect Isamu Noguchi, you can marvel at this fountain that looks like a spacecraft. There are intricate and computerized lighting and nozzle functions, capable of creating countless different configurations. It also contains 300 jets and 300 lights. You’ll soon find out that the configurations of the nozzles and the lights during the night, are dependent upon temperature. 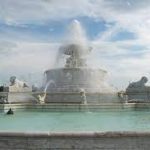 The Scott Memorial Fountain is the jewel of Belle Isle – and a monument to a womanizing scoundrel. Socialite James Scott was said to have been lazy, eccentric, and a prankster. He inherited his money from his father and spent his days not working like the rest of his fellow Detroiters, but often gambling it away. He was known as a perpetual bachelor and misanthrope. When he died in 1910, his vast estate was left to the city to build a monument for the people. The fountain is 510 feet across, and its central fountain could spray water 125 feet into the air. The 109 water outlets are in the shape of dolphins, turtles, lions, and human figures. After undergoing a major restoration about 2005, thieves stole copper components of the fountain, rendering it inoperable. Following a major overhaul, the fountain returned in 2014 to daily service during the summer, complete with a light show at dusk. Click HERE to keep up with the landmark updates. 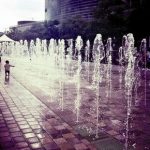 Whether you’re biking, walking, or fishing, stop by the RiverWalk Fountain as you continue on your trails. Splash around and cool off at the Detroit RiverWalk Fountain. Sweltering summer afternoons urge you to get back in tune with the water.