A Start Up Explores the Rarified World of Auctions

Block Auction House Understands the Value in Other Peoples Items 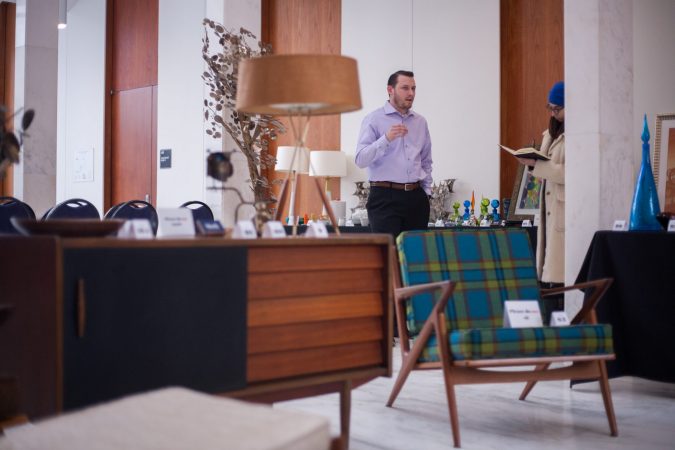 For many, the auction world is one of mystery and glamour, where sought-after art and design are won with often astronomical bids. But for Aaron Siepierski, founder of Block Auction House, auctions are not just a platform for economic exchange and he has set out to prove the cultural value of the auction experience.

Walking up the travertine steps of McGregor Center and into the light-filled lobby, auction attendees experienced the beauty and grandeur of Yamasaki’s vision. Wandering through the vignettes created with the 131 auction lots of period lighting, furniture and art, previewers and bidders were transported into a first time experience for this space, and we’d venture to say, for this city.  This was no accident, “People do not realize how much high design is found here, how important mid-century design is in Michigan” said Siepierski, “and we’re in the McGregor Center for this auction as a reminder of that”.

Several lots featured pieces from Michigan designers and artists including this American Studio Ceramic Platter by Clyde Burt (1922-1981) – who studied at Cranbrook under Maija Grotell.

With almost 20 years of experience in the estate sale business, Siepierski built Block as a community and customer service-focused platform to sell rare, but also, higher value pieces, “it’s really about the neighborhood block, thinking beyond a single price tag and looking out for the buyer as much as the seller, with no lack of items, Detroit could use an auction house like this,” he says.

“It is not just about the auction block, it is about the neighborhood block.”
– Aaron Siepierski, Founder: Block Auction House

As Detroiters are often known to do, Block has re-imagined the model of the auction house to create a more inclusive platform for Detroit and beyond. And Block’s focus on re-connecting people to our shared history through objects, whether they be mid century furniture or rare coins, injects new relevance into what is typically a rarified institution.

Notable lots from the sale include an Adrian Pearsall Slim Jim Lounge Chair in robin’s egg blue (selling price $800), a rare pair of Paul McCobb 3049 Chairs (one of the top lots with a selling price of $1,400), Poul Jensen for Selig Z lounge chairs, sofa and an ottoman (together bringing $2,800), and Siepierski’s favorite piece, “The War Between” by famous American glass artist, Michael Higgins (selling price $1,200).

Vignette featuring a pair of Paul McCobb 3049 Chairs alongside an Adrian Pearsall side table with a Lucite lamp. The McCobb chairs were one of the top selling lots of the sale.