For 88 years Lions football has been an integral part of Thanksgiving Day for the entire nation.

Win or lose, this longstanding tradition is deeply treasured by Detroiters and is simply part of the fabric of the team and the city.

How Did it Begin?

In 1934, baseball was America’s favorite pastime, but football was gaining a foothold. That year, Detroit radio executive George Richards organized a group to buy a pro football team in Portsmouth, Ohio and move it to Detroit. 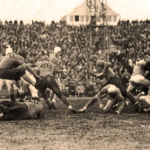 In order to generate interest and ticket sales, he came to the idea of a Thanksgiving morning game between the Detroit Lions, then 10 – 1 and the Chicago Bears, then 11 – 1. So, he approached the owner of the Chicago Bears, George Halas, and together, they made it happen. Further, Richards convinced the NBC Radio Network to broadcast the game across the country to its 94 local radio stations – a first.

The game was a sellout, with 26,000 fans in attendance in a stadium on the campus of the University of Detroit. This was the largest crowd that had ever watched a game in Detroit and the start of an American Thanksgiving tradition.

Since that game, Detroit has played annually except for the World War II years – 1939 through 1944. To date, the Lions have won 37 games, lost 42, and tied twice on Thanksgiving.

DII tapped into two beloved Detroit broadcasters who have spent much of their careers covering the Lions. Mike “Stoney” Stone from 97.1 The Ticket WXYT-FM and Dan Miller from WJBK Fox2 share with us their unique and personal perspectives on this tradition.

Q: First and foremost, do you have family traditions around the Lions game and Thanksgiving? 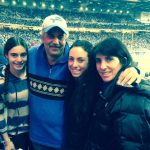 STONEY AND HIS FAMILY

Yes. My wife and I and our twin daughters have gone to the game every year for the last 15 or so years together. We have family pictures from every year! We love it.

We moved to Detroit when our kids were small so they are through-and-through Lions fans. Some people lament that it must be tough to work on a holiday but for me, there is no place I’d rather be. It’s an honor because of what it means to the city and it’s deep history. And I get to share that with my family.

Q: From a fan point of view, what do you think it means to Detroit to have this game every year?

It’s great. I grew up in Philly watching the Lions on Thanksgiving and loved it. Whenever there are rumblings of taking the game away because the team doesn’t deserve it the fans go crazy. It’s so deep seeded here. And when I talk to others in Philly or other cities, they want it to stay in Detroit too.

It means everything to Detroit fans. One of the unique things about Detroit is the deep roots that the fans have. I grew up in D.C. which is very transient. Many Detroiters are born and raised in the area and have stayed. Grandparents pass down their love of the Detroit teams to their kids and so on. So you have multiple generations going to the game or watching it together. It’s very much a family thing and part of the holiday for all fans in Detroit.

Q: Has it become more about a Thanksgiving staple with traditions and memories and less about the Lions?

Yes. The game still gets great crowds even though the team isn’t great. I often hear stories from people who have memories of going to the game every year with their dad and his dad. We need more of those kinds of traditions. 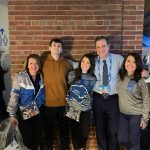 I think it’s both. There is definitely a population of fans who don’t sit and watch every game but because they are sharing time with family they watch on Thanksgiving. It’s a great time to gather and spend time celebrating. I would say most people in Michigan plan their Thanksgiving Day in some way shape or form around the game.

Q: Which Thanksgiving Day Lions game stands out as your favorite?

When the Lions annihilated the Eagles in 2015. The score was 45 to 14. As I said, my hometown is Philly but I root for the Lions and they won big that day.

Also, my favorite anecdote regarding the kids happened in 2008 when the Lions played Tennessee and were getting blown out and we were going to leave but Jesse McCartney was playing the halftime show and our girls wanted to see that. My wife and I suffered through that and then we all left.

It’s hard to pick a favorite. I just love the day. There is something so electric in the city on Thanksgiving – a vibe that is wholly Detroit. My kids and wife love it too. And for me it’s more special now as the kids are getting older because two of them have moved away, and they come back each year for this tradition. It’s an opportunity for us to get back together.

Q: Which was your least favorite?

My first year in Detroit I worked for WDIV, the Lions lost and I had to work and didn’t really know anyone. So after the game I walked to the Anchor Bar and had a turkey sandwich.

In 2004 the Lions got trucked by Indianapolis. Payton Manning was throwing touchdowns almost without looking.

What are you most looking forward to in terms of this year’s game?

Well, I hope it’s competitive. And at least it’s not Green Bay so we won’t have a bunch of Packers fans with cheese on their heads.

It’s going to be a massive challenge for the Lions! But people love this day in Detroit and I’m one of them.

Up next for the city? The 2024 NFL Draft, when the nation will have its eyes on Detroit. And, as a football and sports city, Detroit is certainly ready to shine.