Andrew Carmellini Talks San Morello, Detroit, and the Makings of a Chef 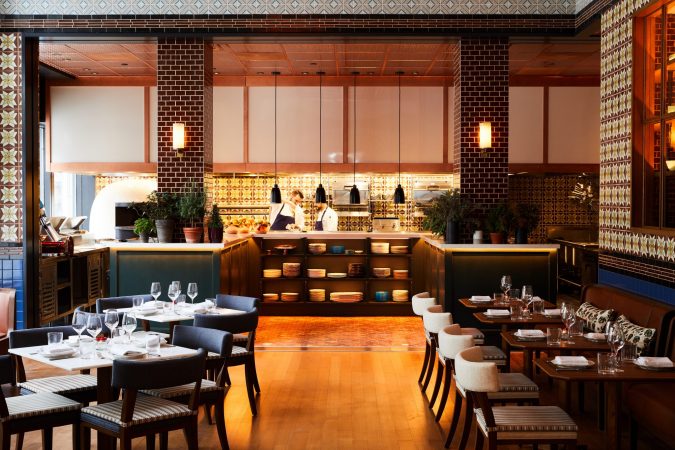 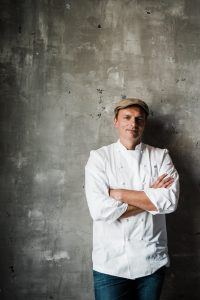 A few years after opening, San Morello — located in Detroit’s Shinola Hotel — remains one of the downtown area’s most coveted dining spaces. Opened by award-winning chef and restaurateur Andrew Carmellini, the eatery brings the tastes and smells of southern Italy to Downtown Detroit.

The driving force behind multiple restaurants across the country through his partners at NoHo Hospitality, Detroitisit had the chance to chat with Carmellini during his latest visit to Detroit.

Talking more than just cooking, Carmellini shares what he loves about Detroit and the story of San Morello.

Cooking since he was a kid, Carmellini was either going to attend the Berklee College of Music or would become a cook. Being the late 1980s, famous cooks were sparse and the idea of making a career as a chef was not really something people thought to make a living through at the time.

“In high school, when I told people I wanted to cook and be a chef, I might as well have said that I was going to go into the military and become a priest because I just got the same response for people,” shared Carmellini. “But that was 1989, things are different now, but that’s kind of how I got into it.”

Moving to New York, Carmellini then went to Europe, traveling and working across the continent, honing his culinary skills. While working in some of Europe’s most prestigious restaurants, it was actually his time out of the kitchen that he valued most during his time during his travels.

“In the two years that I spent in France and Italy, I think my favorite part was not working in fancy restaurants. I took three months off, leased a car and I basically never got on the freeway. For three months, I only went down local roads and went to almost every region in France and I did everything from making cheese to making wine to stuffing foie gras to harvesting grapes. You name it, and I did it,” Carmellini shared while discussing his time in Europe.

Eventually returning to the states, he gained acclaim while working as chef de cuisine at Café Boulud in New York. Working to establish restaurants across the New York City region and East Coast, Carmellini would make his way to Detroit through one of his partners, Detroit native Josh Picard.

With the Shinola team frequenting one of the hotels his partners run in New York, Picard’s connection to Detroit caught their attention for a project they were working on. From there, Carmellini and his partners got on a plane to the Motor City. 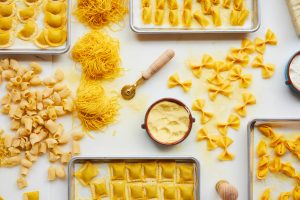 One of his first experiences in Detroit involved sitting outside Layfeyete Coney Island, in a blizzard, while eating a coney amid — as he put it — vertical snow. But, taking some time to learn more about the Shinola Hotel project while also getting the lay of Detroit, the plan for San Morello was soon underway.

“The thing that really caught my eye was that there were already really good chefs here doing stuff. You know there was a good local chef thing going on and it felt really good, which was really important to me,” Carmellini stated while discussing what drew him to Detroit. Opening in late 2018, San Morello merged the style of his Italian restaurants in New York to create a dining experience that offers a wide range of cuisine.

“It’s a little combination of a bunch of my Italian places in New York. I think the inspiration is, we kind of say, southern Italian meaning like the cuisine of Compania and Buja and Basilicata and Sicily — I love that food down there — but really it’s I would say regional Italian,” stated Carmellini, while discussing the style of San Morello. “You know you can get little bits of different parts. We have simple dishes like the sheep’s milk ricotta that comes from Sardinia that feels like you went to the mountains in Sardinia. We definitely have seasonal dishes with spring coming that are just more ingredient-focused in an Italian way.” 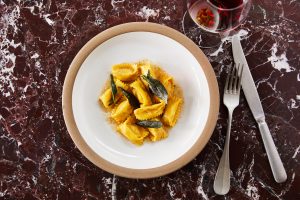 AGNOLOTTI, A PASTA FOUND IN THE PIEDMONT REGION OF ITALY. PHOTO SAN MORELLO

As Carmellini adds, despite being situated inside the Shinola Hotel, San Morello thrives as a neighborhood restaurant. With an entrance facing Woodward and seating that features views of downtown Detroit, the restaurant fits right in with the developing atmosphere it calls home.

“It’s interesting when you’re in a hotel, right? It’s always different from being a standalone restaurant. So I think I’ve been successful in an approach with keeping it a neighborhood restaurant first and a hotel restaurant second,” he added.

Making his way to Detroit a few times a year — as he goes from restaurant to restaurant, one thing always on Carmellini’s list is always a trip to one of the city’s record stores. With a love of music, he’ll often leave with multiple new albums, some not always needed but unable to pass up.

If I do have an afternoon off, I’ll go to People’s records or Hello records — there’s also a couple of places in Royal Oak I go to. I’ll come off the plane when I get home and my wife will be like, ‘did you buy any records?’ and I’m like, I bought ten, nine of them I don’t need, but I still bought them anyway, he shares with a chuckle.

PANDEMIC THOUGHTS, THE FUTURE AND, ADVICE 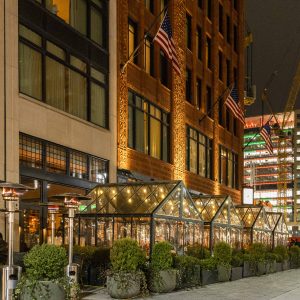 “I think travel’s going to explode and I think it’s going to be a little bit of a Roaring Twenties thing that happens. I don’t think it’s going to happen yet; I would say it’s probably gonna happen in the Fall or Winter after the vaccination really rolls out in every state,” shared Carmellini. “But, events are going to be crazy, I feel. We’re already getting a lot of inquiries from people that had weddings but couldn’t do them and people that had events but couldn’t do events. I feel all that is just going to book up really, really quickly.”

While Carmellini also believes that some aspects of the COVID-19 restaurant experience will continue — like carry-out and outdoor seating — he expressed the same sentiment as many Detroiters. In terms of life, he just wants to go to a bar again and attend a concert.

Lending advice to younger people looking to become chefs and culinary experts —  a question he noted that he receives every year —  Carmellini first shared to not immediately jump into attending culinary school. Instead, he urged getting your foot in the door and really seeing if you like the industry, working in a team setting, and figuring out if you like serving food to people.

I think on-the-job training — if you’re interested in the food part — is the best and better than culinary school and you can explore that later. It’s expensive now to go to school and when you start off in the business, you’re not making a lot of money. You can make a lot of money. But, you have to work very hard to get there. It doesn’t really happen naturally, so it’s good to just try it out first.

On top of San Morello, another culinary gem of Carmellini’s is Penny Red’s — conveniently located steps from the Shinola Hotel and the Shinola Hotel on Farmer St. With fried chicken, honey-butter biscuits, and sides, the eatery is open Wednesday through Sunday.