Artist in the Time of Climate Change, Ellen Rutt Shows at Eightfold Collective 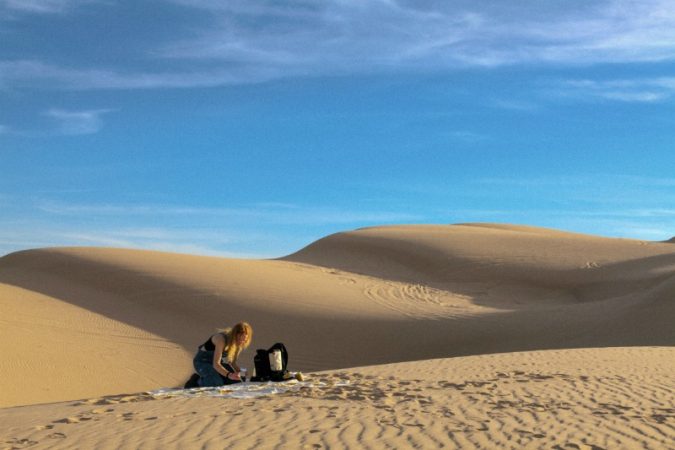 “This felt like an only in Detroit opportunity,” Ellen Rut tells me as we enter the room where she’s installing her upcoming solo show, ‘This Must Be The Place.’”

The show’s hosted by Playground Detroit, but it takes place at the production studio Eightfold Collective—”spaces like this won’t be around forever.”

Which isn’t a comment on the creative agency as much as it is about the scarcity of accessible artist space.

The show stretches multiple rooms, but the main room is something special for sure. 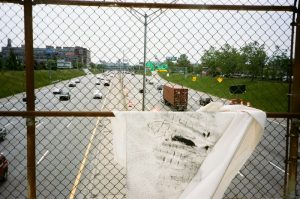 There’s a name for a wall that runs into the floor—two actually. I didn’t know either until Ellen Rutt’s sister, Leah Rutt, tells me. It’s called a psych or an infinite wall.

They’re used for video shoots and look like skate ramps and, in this case, they work with Ellen’s paintings to create a sort of life size diorama, with paintings sloping into the ceiling and others jutting from the center. A life-sized forest of color, shape and collage.

It’s impressive but not polished. While Rutt has been commissioned to create murals for some of Detroit’s biggest, and newest, lifestyle players, like Lululemon and WeWork, this show evokes downtown artist lofts of the 1990s, in the days before social media when the city full of secrets.

This isn’t about real estate, but it is about place.

The story starts in New York City, where Ellen Rutt was on residency. Away from home, she got to thinking about her career, and the many, many murals she’s created. And the all the places they’ve taken her.

“What I love most about murals is the site specificity, and the fact that I’m invited to go into a lot of different spaces, and, come in as an outsider, with much respect for the people who live there.”

So the work began. 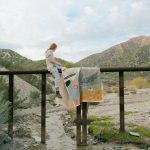 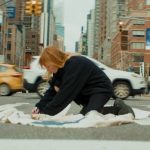 Armed with paper and a satchel of paint, she collected samples. A gig in LA provided an excuse for a road-trip. From street-side to mountain, she made her way across the country, tracing patterns from the landscape.

“Making this body of work grounded me in the fact that all of these seemingly separate places are connected. That inner-city Detroit and the subway station in Brooklyn and rural Utah are all part of the same system.”

Reaching beyond the two-dimension art of mural making’s community + art, she found a third component: the earth.

Maybe this is a story about changing Detroit, but it’s bigger than that: it’s about a changing world and the insights that come from taking the time to really know something.

In a hacked Buddha’s tale for modern audiences, years get abbreviated to months, and after a spell of staring at the ground, a vision takes shape.

The enlightenment of being faced with one’s actions: climate change is real, and we’re all part of the problem.

“I drove across the country in a fossil fuel burning vehicle to talk about climate change. I am not a perfect green person. The point of this show was for me to examine my own hypocrisy in it, examining that even if you’re living a perfect green life, we’re in a world where the system is built so that, even if you don’t drive a car, the things that you need, all require fossil fuel.”

Which is a great observation—but what next?

“This show is born out of this place that we live in this world, and it’s all inter-connected. We’re living in a hypocrisy, but it doesn’t mean we can’t be better. We can course correct and help each other. Not call 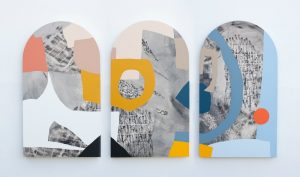 each other out but require more of our leaders and acknowledge we’re artists in the time of climate change.”

Of course none of this is in the show. While Ellen has curated a billboard campaign to coincide with Detroit Art Week, this is not it. And, as far as we know, Ellen has not planted a performer in the audience to strike up meaningful conversations.

Ellen is offering her samples, so that we may experience the journey first hand, and find our own path—although she is certainly not shy about pointing us in the right direction.

“What is most impactful at this moment is getting involved with local environment organizations.” She easily rattles off some favorites: Detroit Dirt, Forgotten Harvest, Detroiters Working for Environmental Justice, Good Jobs Now, The Sunrise Movement, Extinction Rebellion.

The garments in the show’s pop up shop are made from up-cycled fabric and the opening party’s refreshments will be served in reusable cups—”not because compostable options don’t exist, but I want to move people beyond a single use mindset.”

Carrying the theme, plans for her artist talk sound more town meeting that gallery affair, with Ellen looking to others to bring their wisdom and insight to the conversation.

This Must Be The Place opens to the public on Saturday, July 20th from 6-9pm during Detroit Art Week 2019, following a ticketed preview dinner for collectors and press on Friday, July 19th. Exhibition entry is free; preview collectors dinner tickets are $125 per person. The exhibition will be on view through July 27th located at 2831 East Grand Boulevard, Detroit, MI 48211.