Whether You’re Seeking Advice, Someone to Talk With, or a Trim, for DeAngelo Smith SR. of Executive Cuts, Being a Barber is There to Help Others 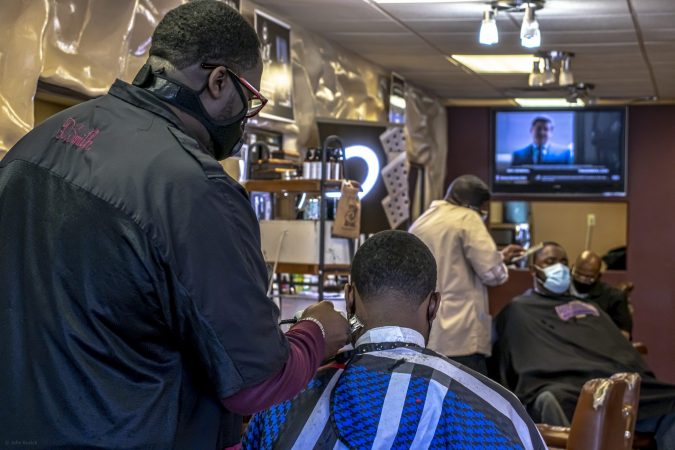 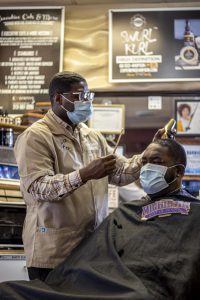 Servicing the working person to the executive, one thing is certain about the Executive Cuts & More barbershop in Detroit’s Rivertown – Warehouse District, no matter who you are, you’ll leave feeling good.

To DeAngelo Smith Sr, Master Barber & Instructor, being a barber is so much more than only cutting hair; it’s about helping people to feel good about themselves while at the same time working in a position where one may offer advice about life, everyday problems, or just have a conversation with someone who needs it. Inside Executive Cuts, there’s a positive atmosphere where respect is taught and a few ground rules include no profanity – whatsoever.

“I want everybody to have the same executive feel when they come into the barbershop, so the everyday person gets the executive feel and the person who’s used to an executive feel gets the same thing. Everyone comes ad leaves as an executive when they walk out of the barbershop, ” shares Smith, while discussing the feel he tries to promote at Executive Cuts. “The standard is no profanity, respect your brothers, respect your sisters and everyone is welcome from zero to 80. I want everybody to feel comfortable, so that’s from city officials to everyday hard-working men and women.”

By serving as a space in the Detroit community where people can go to feel good about themselves, Executive Cuts is playing a vital role, especially at the time when some may not feel all there amid the ongoing COVID-19 pandemic. According to statistics, in the Detroit-Dearborn-Livonia area, around 48 percent of all people seeking mental health care are unable to receive it, while 81 percent of those seeking support for substance abuse find themselves without care.

While in no way a substitute for mental health facilities and care, the role of a barbershop in a primarily Black community like Detroit is one that promotes better health, a sense of community, and a feeling of goodness in one health. Barbershops and spaces to have conversations about problems in one’s life also have health benefits ranging from lower rates of uncontrolled hypertension and a reduction in blood pressure levels.

According to a study from the New England Journal of Medicine, “Among black male barbershop patrons with uncontrolled hypertension, health promotion by barbers resulted in larger blood-pressure reduction when coupled with medication management in barbershops by specialty-trained pharmacists.”

NOT JUST A TRIP TO THE BARBER

For someone like Smith, the issue of mental health disparities in marginalized communities is apparent and is part of the reason he worked to create a welcoming atmosphere inside Executive Cuts. By creating a space where someone is comfortable about opening up, it’s easy to start conversations around topics ranging from mental to physical health. 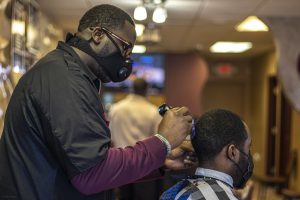 “I think the biggest chemistry is to create an atmosphere where people feel comfortable enough to talk to you and when people feel comfortable enough to talk because of the atmosphere you create, it gives you the opportunity to speak to the issue that they may be experiencing, whether that’s mental, emotional or physical. Whatever the issue that they’re dealing with, the atmosphere has to be conducive to them opening up to you and giving up an opportunity to speak to it,” states Smith. “I created an atmosphere at Executive Cuts where when they leave, it’s not just a haircut, but an uplifting feeling to their spirit, mind, body and soul.”

In the shop, conversations with patrons range from sports talk and life stories to family troubles and the matter of being a Black man in America today.

Conversations range from various things in a barbershop, from Sports to relationship issues and problems, being a black man in America, being a man period the responsibility that you hold to the family. With me being a minister at my church as well, there’s also spiritual advice that I may give to people that desire that on a specific basis, adds Smith.

Citing the closure of mental health facilities throughout Michigan in the past, Smith shared that the role of the barbershop is critical to communities like Detroit because it allows people to have space where they feel comfortable connecting with someone.

“The closing of mental institutions that used to reside here in Michigan has created a big impact on some of the crime that happens in the city,” he shared. “Some of the issues that arise, it’s mental health that is needed and people don’t feel there’s a safe space to deal with it because they don’t have institutions that know provides you that opportunity because they’ve been closed.”

“But the barbershop that we have here at Executive Cuts, we have a gentleman that is 68 years old, a gentleman that is 45, 43, 48, and I’m 38. So, we have a range of people who can speak to issues from younger to older and can speak to some of the issues that you might have been dealing with because we’ve been through it at some point in our lives between the four of us” Smith added. 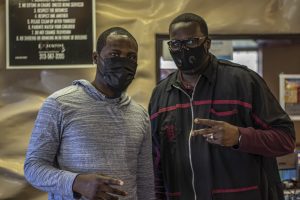 When looking at the matter of mental health in a community like Detroit, one cannot ignore the effect of the pandemic, which nationwide sees that 4 in 10 adults report symptoms of anxiety and Depression. When businesses close back in March, many were unable to make it to the barber for some time, but this did not stop Smith and others at Executive Cuts from keeping in touch with clients and their community.

“What I did throughout the pandemic when we were out of the shop for three months, me and my clients still stayed in touch. I would talk to them, call them, they would reach out. I would reach back to them and we would just talk because more than being a client, we became family,” shared Smith while discussing the pandemic. “That’s the kind of atmosphere you try to create, so the clients understand that I care more than just giving you a haircut and you giving me money, I care about your well-being, your family, I care about what you care about.”

At the end of the day, like Smith shares, being a barber is more than just cutting hair and calling it a day; it’s about forming relationships with people, building trust, and helping people to feel good about themselves. When looking at all the roles a barber plays, Smith describes the role as vast, filling multiple roles in people’s lives.

“The role of a barber is so vast and it goes from everything from a mentor, father figure, mother figure,  therapist, pastor. It ranges from everything because there are things that people will confide in their barbers because you’re in such a close intimate space and there’s not a lot of time where people sit down and give the opportunity to talk” shares Smith. “There are times when you’re in the barber chair that you will say things that you won’t say to everybody else, that’s why it’s important to give sound advice and if you don’t know, don’t speak it and just be you.”

Executive Cuts is currently open at 267 Joseph Campau Ave for anyone seeking a fresh cut and the opportunity for a great conversation.