Creating a Robust Retail Experience in Detroit – and Keeping the Entrepreneurs Coming! 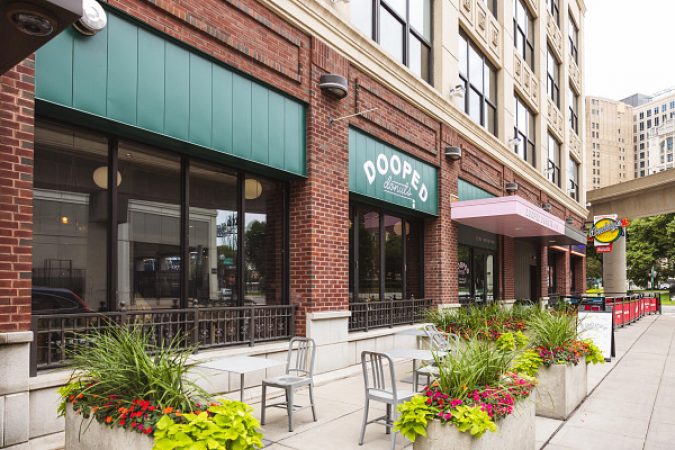 As the energy, experiences, and offerings continue to progress in Detroit, and retailers both big and small weave their wares to create a unique and colorful fabric, the city is back on its way to becoming a robust shopping destination with its own distinctive style, flavor, and soul.

Would one expect anything less of Detroit?

It’s no wonder that a city that’s known for its resilience, grit, and determination, is the source of – and perfect proving grounds for – entrepreneurs and small businesses with those same traits. 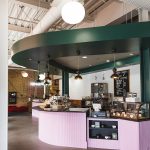 One such example is Dooped Donuts. This subsidiary of Eastern Market Brewery and The Ferndale Project was born out of the pandemic. Having gone from selling individual handmade donuts in the parking lot to a wholesale business to multiple pop-up venues to a new storefront on Broadway, their success story continues to unfold.

“We had opened The Ferndale Project and hired staff and then COVID hit three weeks later forcing us to shut our doors,” says Shaylyn Getz, innovation director of Eastern Market Brewing Co. “We didn’t want to lay anyone off, so we just started coming up with things we could sell. We began making breakfast sandwiches, creative vegan donuts, and coffee that we’d serve drive-through style outside and sold out every day. The donuts became such a hit, we knew we were onto something.”

Now, instead of a national donut chain that can be found in nearly any city, Detroit has Dooped Donuts, an extraordinarily unique vegan brand with a story and offering all its own.

This is what entrepreneurs bring … unique ideas, services, and products that together, create the foundation of the city’s personality, 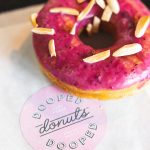 The developers’ portfolio of retail partners includes more small businesses than national chains, and Greaner says that’s on purpose. “The ongoing development of the small business community here is what will continue to differentiate Detroit from anywhere else in the world.”

To that end, Bedrock has fostered relationships with and provided support to more than 140 local small businesses along their entrepreneurial journeys offering a cyclical system of support from start-up to pop-up to brick and mortar starting with the Downtown Markets.

The Downtown Detroit Markets – launched five years ago with a $2.3 million financial contribution by Bedrock and the Rocket Community Fund – provides a platform for entrepreneurs to introduce their products to a diverse market. To date, more than 120 brands have participated in the markets.

Bedrock also offers a variety of pop-up locations, for entrepreneurs to grow their brands.

And finally, for those looking for a long-term downtown presence, Bedrock works to strategically place them in brick-and-mortar storefronts and provide ongoing marketing support to promote them. A great example of this entrepreneurial journey is Girl Boss. The locally owned women’s apparel boutique became a pop-up within the Bedrock portfolio at 1232 Library for what was originally supposed to be three to six months. After fifteen months of success, they started talking about permanent space, and on the first of July, the brand transitioned to a full 2,200 SF brick and mortar storefront located at 111 Monroe Street.

When asked ‘why downtown’, owner and native Detroiter Tenisia Evans enthusiastically says, “Why not Downtown?”

She goes on to say,

Downtown is re-emerging and I would like to be part of that resurgence. There really were no women’s clothing stores downtown doing what I’m doing so it’s a perfect fit. My mission is to empower women of all shapes and sizes so that they can walk in confidence because there truly is a ‘girl boss’ inside every woman. I want to bring color and flavor and just a little bling to everyone I help to style, and encourage and inspire every woman to act like a Lady, but dress like a boss!

“This is just the type of ‘special sauce’ we love to see in Detroit and we are working closely with Tenisia to ensure she has every opportunity for success,” said Greaner.

In this vein, Bedrock has developed an entire Retail Support Department dedicated to marketing and supporting its tenants – something most property managers don’t offer.

“The Bedrock team is in lock-step with us regarding marketing strategy,” said Getz. “They’ve executed push text campaigns, social media campaigns, press releases, connected us to other businesses, and put us in front of such a large audience,” said Getz.

Greaner expands on this saying,

One of the unique things Bedrock has to offer is the breadth and depth of our internal network, team members, and partners. We are 18K strong, and we promote every business we work with to this vast audience.

Adds Getz, “That’s a lot of voices to have behind you when you’re a small business.”

On the opposite side of the spectrum is Michigan-based grocery chain, Plum Market which opened a dining-focused small format location at the Ally Detroit Center (500 Woodward Ave.) in July of 2019.

With a 15-year history and broad range of experience, Plum Market pioneered their small footprint format in a vibrant, high-profile location in the city, bringing new, fresh, and healthy food options to those who work and live in the area. Bedrock is thrilled to have partnered with them. 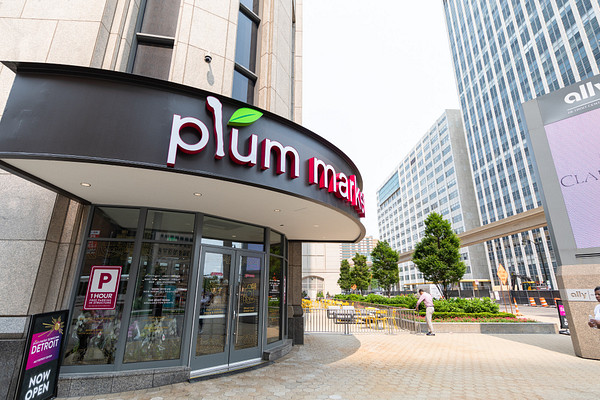 When the pandemic hit, Plum Market temporarily close, converting to a cashless self-checkout format and retooling its menu to improve the speed of service for guests.

“Bedrock has been in constant contact with us through everything and greatly assisted in promoting our recent reopening,” said Kelly Toone, Vice President of Foodservice.

When asked what the retail climate of the city is currently, Greaner says it’s on fire. In fact, Greaner goes on to share there are more tenants interested in being in Detroit than there are spaces.

Detroit went from being a city that people didn’t want to hear about 15 to 20 years ago to a hip, cool spot on the map and now brands seeking to gain attention want to be a part of that. People are coming back into the cities all over the world to shop and brands want to be there. I think Detroit is in a unique position to take advantage of that and amplify it because we have that cool factor.

About this entrepreneurial ecosystem in the city, Greaner says, “It’s really rewarding to connect these entrepreneurs in different ways to an eager downtown clientele. It’s also thrilling to witness first-hand, the development of Detroit’s unique style and culture – its flourishing retail scene. It’s truly a win-win for everyone.”