Billie Holiday and Her Many Detroit Performances

With the Film ‘the United States vs. Billie Holiday’ Slated for a February 26 Release, Lets Look Back at the Singers Long History of Performing in Detroit 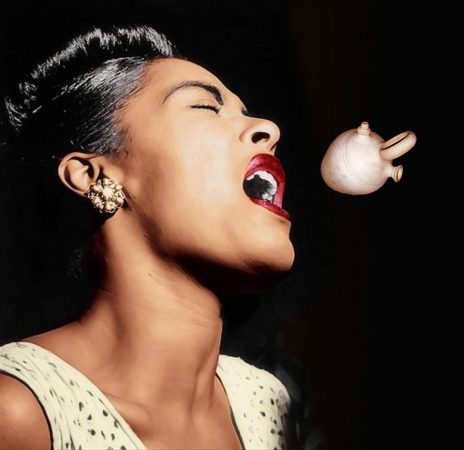 The story of Billie Holiday will gain greater relevancy in the year 2021 given the soon-to-be-released film, The United States Vs. Billie Holiday, which will chronicle Holiday’s life in the 1940s as the Federal Bureau of Narcotics began to target her. While the film has yet to be released, let’s take a moment to look back at the many times Holiday made her way to the Motor City, while revisiting some of Detroit’s long-forgotten halls of music.

According to Concert Database, from 1937 to 1958, Holiday performed 132 shows in Detroit and River Rouge, either as part of an event or as a solo act. While some of these shows took place at venues known today such as the Fox Theatre and the Music Hall Center for Performing Arts, others such as Club Zombie, the Graystone Ballroom, and the Flame Show Bar are no longer standing, while others remain today but under new names. 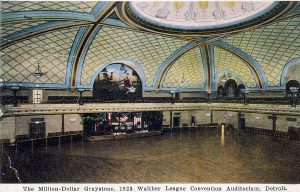 Holiday first performed in Detroit on December 5, 1937, at the famous Graystone Ballroom, a massive dance hall formally on Woodward Avenue. With a floorplan designed to hold close to 3000 people, it was one of the largest venues in the city at the time.

Throughout her career, Holiday played a fair amount of shows at the theater, which remained open past her death in 1959, closing in 1972 and demolished in 1980.

Another venue that frequently saw Holiday perform was the obscure Club Zombie, located at what is now 8825 Oakland Street in Detroit’s North End neighborhood. While not much is known about what became of Club Zombie, it is featured in multiple editions of The Negro Motorist Green Book from Victor Hugo Green — which was meant to work as a guide for Black motorists seeking safe travel during the era of Jim Crow laws.

There was also Eastwood Gardens, another concert hall that was part of the larger Eastwood Park, an amusement park, as well as Club Juana, which used to be located at 2725 Woodward Ave, close to where Little Caesars Arena stands today.

Perhaps the most interesting spot where Holiday performed is a spot that still exists today in all but name, Paradise Theater — or known today as Orchestra Hall, the home of the Detroit Symphony Orchestra. Opened on Christmas Eve 1941, the music hall hosted other great talents such as Duke Ellington and Louis Armstrong. 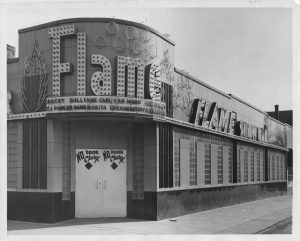 Named for the Paradise Valley Neighborhood along East Woodward Ave — which was home to a large percentage of Detroit’s African-American community — historical accounts show the theater being compared to the Apollo Theatre in Harlem in terms of importance. Unfortunately, the Paradise closed in 1951, remaining vacant until renovation work began in the 1970s, leading to the Orchestra Hall we know today.

The time Holiday made her way to the Motor City in September of 1958, she played at the Flame Show Bar which was located at 4264 John R. in Detroit. Another upscale entertainment venue, the venue hosted large names like Dinah Washington and B.B. King, while also helping to start the careers of local talents like Jackie Wilson and LaVern Baker.

Yet, like many of the older concert venues of Detroit’s Jazz Age, the Flame Show Bar was not long for this world and closed its doors in 1963.

As sports stadiums, upscale eateries, and other venues are built in today’s new era of Detroit development, let’s remember the buildings of old, as underneath the new lies the history of Detroit stories and the giants who once stood there.

For those looking to learn more about the life of the late Billie Holiday, the film The United States Vs. Billie Holiday drops on February 26 on Hulu. The documentary Billie is also another great resource that chronicles much of the singer’s life.