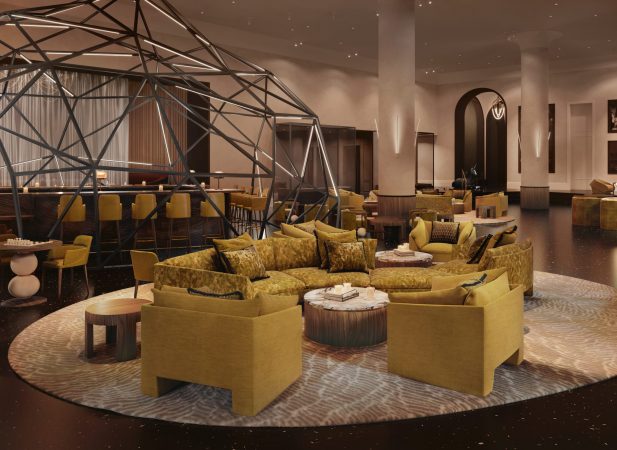 The Metro Detroit region has no shortage of luxury locations  — and with COVID-19’s continuous trot — the idea of a staycation at a luxury hotel is all the more appealing to people tired of being cooped up inside their own homes. From the same portfolio as Detroit’s Foundation Hotel, the Daxton Hotel in downtown Birmingham is a standout gem.

Being open a little over two weeks, the Daxton Hotel’s five floors are packed to the brim with fine design elements and beautifully curated art that pop to the eyes as soon as one walks into its high ceiling lobby. Minimalist yet grand, guests are met with large pillars, plants, and plenty of natural light when first stepping through the doors.

Perhaps the most eye-catching aspect of the building’s lobby is the hotel bar. Surrounded by a sprawling metal geode — that looks akin to a space-age dome — the area works to separate bar patrons from the lobby around it without sacrificing a sense of atmosphere. 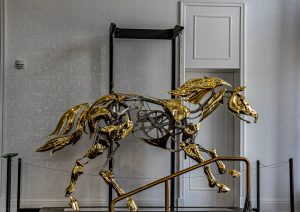 Built inside the lobby before opening, the massive spherical web was the product of a Michigan-based master welder Andy Dafski of Metal Dreams Inc.

“We wanted to give the bar its own identity without really taking up a whole lot of physical volume. So the designer settled on this idea of the geode,” shared Daxton General Manager Aaron Black. “It’s obviously very visible, very accessible. You hear all the sounds; you can see all the guests. Its existence, its presence, certainly serves as a jumping-off point for the owner to get really excited about the opportunities for art.”

Art is abundant inside the space, featuring pieces throughout the hotel from Saatchi Art, sculptor Adrian Landon and Detroit artist Louise Jones (née Chen) — known as Ouizi. Original pieces in the lobby and guest rooms feature back spreads hanging from the walls behind the beds, unique work from Ouizi for the hotel. 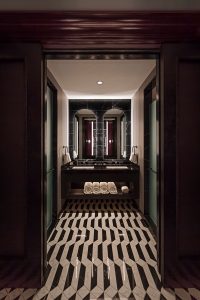 THE ENTRYWAY TO A GUEST ROOM. PHOTO APARIUM HOTEL GROUP

The hotel restaurant, Madam, creates American dishes with a different twist. Influenced by the West Coast and California region, the cuisine stands out from other Birmingham spaces due to the lighter — more Mediterranean-influenced — flavors. Along with traditional items like pizza, the eatery also serves up sea scallops and Wagyu strip loin and lunch selections like Potato Gnocchi and Tagliolini Neri.

“It’s got a very healthy lighter influence than some of our local competitors,” added Black while discussing Madam. “Then pizza and pasta courses to still get a price point that makes it a very comfortable place to be. But the chef is all about simple ingredients and very vibrant flavors.”

For guests staying in one of the hotel’s 151 rooms, they will be met with gorgeous displays accented by art pieces and a range of colors. Checkered floor patterns dot the ground, while hues of burgundy, beige and dark blue layer the walls before the room opens up with natural light and great views of downtown Birmingham.

Overall, the hotel presents a luxury staycation destination different than some other spots in the area. Touting wine rooms, private dining areas, and parlor rooms, Daxton goes beyond being more than a place to sleep before setting out on the town.

“We’re really well-positioned to offer something that’s very contemporary and an alternative to what people have been able to do and experience elsewhere up to this point,” shares Black. 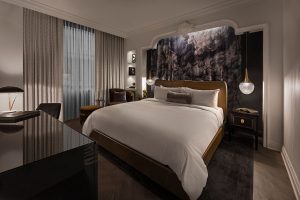 With Aparium also operating the Foundation Hotel in Detroit, Daxton presents a different picture than many of the group’s other spaces. Artistic and fun, the space is fitting to the Birmingham scene, similar to the Foundation’s perfect fit in bustling downtown Detroit.

“I think it’s predominantly the commitment to being so fun and energetic and artistic driven. And then within the Aparium company, in our hotel group, it’s really just serving a different market than a lot of our other hotels do,” added Black.

Situated just a short drive from Detroit and other amenities, Daxton is a perfect spot for your local staycation. Minutes from Cranbrook for those not looking to drive far, guests can also take advantage of the tightly packed, walkable downtown Birmingham community around the hotel.

Amid COVID-19, sanitation is key for the hotel, with all precautions taken inside the lobby and public spaces, while all rooms receive electrostatic cleaning each time guests check out of a room. Learn more about Daxton, Madam, and the perfect staycation experience at daxtonhotel.com/rooms.