Two Lost African American Communities, How Can History be Restored? 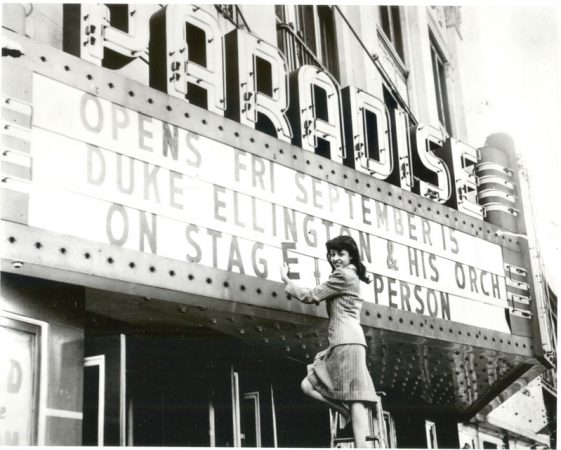 Eighty years ago Detroit’s own Joe Louis defeated Jimmy Braddock to become world heavyweight champion. The June 22, 1937 historic bout at Chicago’s Comiskey Park was a career-establishing win for the handsome 23-year-old. Moreover, it was a win for marginalized black America, in general, and Louis’ neighborhood, in particular. After all, humble Catherine Street in Black Bottom is where he was raised; bustling St. Antoine Street in Paradise Valley is where his business office was located.

It was perhaps the neighboring communities’ finest hour. An estimated 10,000 euphoric Joe Louis Booster Club members made the sojourn by train from Detroit to Second City. A variety of notables traveled in a VIP section of the train, including Roy Lightfoot, owner of the all-the-rage B&C Beer Garden and mayor of Paradise Valley; and Andrew “Jap” Sneed, owner of Club 666 or “Three Sixes,” as it was sometimes called.

“It was highly important,” says Jamon Jordan, a historian and founder of the Black Scroll Network History and Tours, a business that provides excursions to notable and important sites involving blacks in Detroit. “By this time, Louis becomes influential to people all over, even outside of Detroit.”

Those communities were the epicenter of black life in Detroit during the 1930s, ‘40s and ‘50s. They don’t exist anymore. There is now a move to bring them back, in a new format.

Hiram Jackson, an entrepreneur and publisher of the Michigan Chronicle, the state’s largest black newspaper, is part of a group of African Americans who’s mission is to renew the spirit of Black Bottom and Paradise Valley.

That’s because, in 2016, the Downtown Development Authority of the City of Detroit approved a comprehensive plan to redevelop nine properties near the old Paradise Valley area culminating in a $52.4 million investment in construction and renovations.

The Paradise Valley Cultural & Entertainment District project includes the simultaneous redevelopment of five existing buildings and four surface lots scheduled to be built over the next three years.

Called Hastings Place and led by Jackson, when complete, the $27 million, 83,340 sq. ft. building will include 60 apartments, a five-story parking deck, retail spaces, and new offices for the Michigan Chronicle.

“Moving back to the new Paradise Valley is a real celebration for the Michigan Chronicle,” Jackson declares. “Paradise Valley is where we were founded in 1936. Building Hastings Place next door continues the legacy and spirit of Paradise Valley that was started by African-American business pioneers and entertainers more than 80 years ago.”

“Stepping in to purchase these buildings to stabilize this section of the district was the right move,” Rod Miller, former CEO of the Detroit Economic Growth Corp. (DEGC), said at the time. “I’m proud that a decade later, the DEGC has found developers who have the capacity to develop the entire district at once and turn it into a cultural destination that’ll serve Detroit for years to come.”

It’s a 180 degree turn in direction from city government’s posture toward Black Bottom and Paradise Valley some 70 years ago.

Six hundred miles east of Detroit, a developer named Eugene Greenhut was helping to lead urban renewal efforts in New York City. By 1944, Greenhut had set his eyes on the Motor City. The automobile capital of the world was different from the Big Apple. Not least of which being that it had a land mass larger than Manhattan and Brooklyn combined. Yet, both had a growing black community and it was this community that was creating all-the-rage music and visual arts.

Detroit is where blues great, John Lee Hooker performed at Henry’s Swing Bar on Madison Street in Black Bottom strumming his guitar and voicing in his signature style spoken-word Mississippi drawl. Here, he recorded one of his popular hits, “Boogie Chillen.”

The city’s black population skyrocketed from 5,700 in 1910 to 120,000 by 1930. By estimates, about 350 black-owned businesses were located in the Black Bottom and Paradise Valley area. Black Bottom was largely a residential area, south of Gratiot and bounded by Brush Street on the west and the Grand Trunk Railroad tracks on the east.

Some say the rich black soil of the original area gave rise to the name Black Bottom. Yet, others have raised questions about the possible racial origins of the name stemming from the segregation era Black Bottom dance — considered to be invented in black areas of the South, traveling its way north together with the black migrants in the 1920s.

Greenhut proposed a $50 million redevelopment plan to strengthen the two aging neighborhoods: white community on the west of Woodward Ave, the black community to the east.

Two-term Mayor Edward Jeffries was still reeling after his city was rocked by race riots in June 1943, things got bad enough that President Franklin Delano Roosevelt sent in federal troops. Jeffries pondered Greenhut’s proposal, which by then was known as “The Detroit Plan.”

Jeffries realized that the nation’s fourth greatest city needed to revitalize itself and provide livable housing for both blacks and whites. A plan was devised through his housing commission, and was floated publicly. But, residents on neither side liked the idea, and thus, Jeffries proposal went on the back burner.

“This area be acquired by the city and completely cleared of all buildings thereon, that the area then be re-planned, with the object in mind of disposing of as much as possible to private enterprise for redevelopment for housing and incidental commercial purposed after providing sufficient space for parks, playgrounds, schools and other public uses,” Jeffries wrote in April, 1946.

Later that year, the nine-member housing commission did just that. By 1950, a new mayor, Albert Cobo, razed the community largely made up of black renters. It was replaced by a middle class set of townhouses, and high rise apartments and condominiums units called Lafayette Park, albeit designed by world acclaimed Mies van der Rohe. By October 1956, Pavilion Luxury Apartments broke ground. Construction of the I-375 portion of the Chrysler Freeway followed in 1959, effectively killing Hastings Street, the business thoroughfare that bridges Black Bottom and Paradise Valley.

“The Detroit Plan was definitely one of the efforts set in motion that ended Black Bottom and Paradise Valley,” Jamon Jordan states. “It was highly significant.”

About three-quarters of Lafayette Park’s population was white, according to 1970 census figures. Because of the manner in which the land was taken and the clumsy way in which people were displaced, coupled with the lack of available housing units, the Detroit Free Press in 1974 called the effort “urban renewal’s first fiasco.”

Jordan believes that the new Paradise Valley development plan doesn’t compare to the size and scope of the original enclave but believes in its significance because it includes government collaborating with black business. His disappointment comes through, however, given that a long-standing black business, the Carr Center, an arts and cultural center, moved to make room for it.

“However, I do applaud government when it does something to support African Americans in a predominately African-American city,” Jordan says.

Ken Coleman, a former Michigan chronicle senior editor and Michigan democratic party spokesperson, has served as press secretary for Gary Peters and Brenda Lawrence on capitol hill. He’s written and published four books on black life in Detroit and now works as a communications specialist for the American Federation of Teachers.