Born in Detroit, One of the Country’s Only Black-Owned Ice Cream Makers 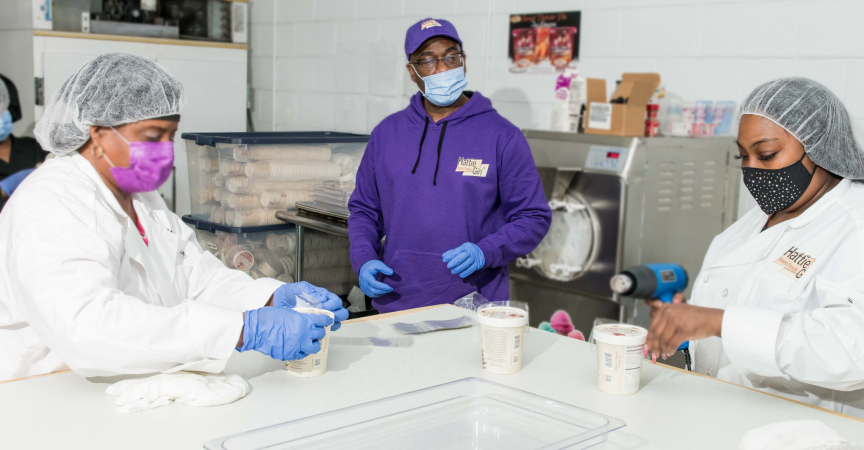 Detroit holds the distinction of being home to one of the country’s only black-owned ice cream manufacturers, HattieGirl Ice Cream, and its flavors are as down-home, authentic, and unique as the story behind it.

HattieGirl Ice Cream Founder and CEO James Render always liked to cook. At age eight he borrowed a Betty Crocker cookbook from the Detroit Public Library that his eldest sister took him to regularly. In it was a recipe for ice cream that he wanted to try, a desire which was inspired by his mother and great grandmother’s love for churning the dessert.

An ice cream maker found its way under the family Christmas tree and thus began his part of the family journey – one that had actually started years earlier.

HattieGirl Ice Cream is a true legacy of entrepreneurship and benevolence whose roots go back to James’ Great Grandmother and former slave –  Lula Foster.

Lula raised her grandchild Hattie Foster Thomas, after the loss of Hattie’s mother. One of the things they enjoyed most was baking and churning uniquely southern flavors of ice cream, which they would take to the fields near their home in Midway, Alabama, and sell to the farmhands as they came in from a day’s work. Lula would tell her granddaughter, Hattie Girl, I think you are a hit with all of these folks, so the name – and the love of making ice cream – stuck. 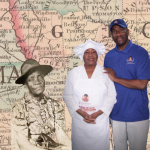 Hattie, who had moved to Detroit in the mid 1950’s as part of the great migration –  passed down her passion for making the delicious dessert to her son, James.

Regarding the evolution of the unique southern flavors, Render says, “When I began experimenting with ice cream flavors as a kid, my mom would make suggestions, saying ‘what about this or what about that flavor, James.’ She gave me a lot of freedom to try new things. I began with the recipes I found in that Betty Crocker Cookbook, but my mother’s upbringing and the Southern flavors she grew up with sparked my ideas as well. That’s ultimately how we ended up with our signature ice cream – Sweet Potato Pie. “

Manufacturing ice cream for a living is not something Render has always done. In fact, getting here has been quite an evolution – one that began back in that Detroit Public Library.

He says, “It was inside that library that the inspiration for three life paths would be sparked. “

First was a love for learning, which led Render to a 28 year teaching career in both Harlem, New York, and Detroit. His last position in Detroit was with Davison Elementary/Middle School where he was recognized for his work with students in math, reading, and writing.

The second was music. Render says, “As I wandered through that library, I discovered its pictorials of Motown greats like Barry Gordy and the artists who performed on his label. Those glamorous stars made a lasting impression on me, and I just knew I would be involved in the music industry – and I was.”

James ran his own record label for a time and then shared his passion for music by directing God’s Little Soldiers International Boys Choir, traveling all over the country and overseas, and ultimately leading them to two Stellar Awards.

Ironically, that is what led him to his third and current ‘life path.’ “ HattieGirl was actually born from the need to raise funds for the boy’s choir. We’d sell ice cream to offset expenses.” 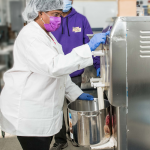 Ultimately this rekindled Renders’ joy for making ice cream, so he bought a former church on Detroit’s Westside on a land contract, equipped it for manufacturing ice cream, got inspected and certified, and began operating as HattieGirl Ice Cream and Foods in 2018. He took a leave of absence from teaching in 2020 to focus on growing HattieGirl as a business.

Unlike a lot of small-batch ice, artisanal cream makers, HattieGirl has never operated as an ice cream shop scooping ice cream for patrons. They went directly to retail stores, the first of which was Foodland on 8 Mile in Southfield, a store Render grew up going to and his family knew the owner. He says “They gave me a shot. We’ve been selling well there and in dozens of other local markets ever since.”

Of his path, Render says,

With the help of my mother and inspiration from my great-grandmother’s Southern experiences, I’ve blended those early career paths and talents to build HattieGirl Ice Cream and Foods. People seem to love what we’re doing, which is keeping me too busy to go back to school. I miss teaching, but for now, I’m where I am supposed to be.

On each carton, there is a little history lesson about how the ice cream came to be. The HattieGirl Ice Cream commercials also tap into James’ music industry experience – two have earned Emmy Award nominations. 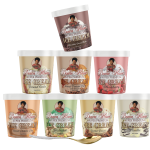 The hard work and great product are certainly paying off. Recently he signed distribution agreements with both Meijer, starting with a Royal Oak location and the downtown Rivertown Market location, and is now going into 22 Southeast Michigan Walmart stores.

“HattieGirl Ice Cream is a way to carry on my family legacy, to share my family’s story and build on that legacy, says Render. “I have heard over and over from people who are so excited about seeing a black-owned ice cream brand in store freezers.”

Hattie is still heavily involved in every scoop, with Renders commenting, “this is my company, but my mother likes to oversee everything we make. She wants to ensure everything is up to her standards. She tells me, “James, that’s my face on the carton.’ I cannot argue with that”

His goal is to go national in the next few years and his aim, he says, “Isn’t to become a big business, but a great business.”