Especially Not Over a breakfast with Artist Robert Sestok 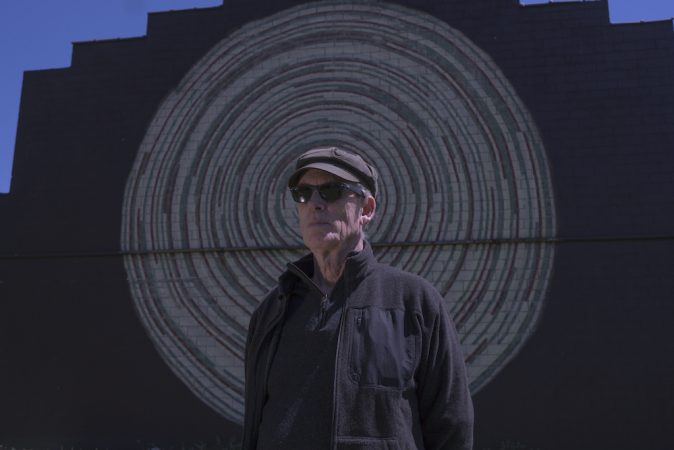 Robert Sestok is a Detroit original and career artist, living and working in the city since his days at Wayne State University. In the early 1970s, Sestok was one of the recognized names among the Cass Corridor Movement—arguably the most notorious contemporary art movement to emerge from Detroit. Sestok’s scrap metal sculptures dot city parks, including City Sculpture in Midtown, a retrospective sculpture park of his own creation, with works bridging some five decades as a practicing artist.

Sestok is a multi-media artist, gaining visibility for his drawn and painted work, as much as his sculptures, including public art pieces of both the permitted and unauthorized variety. Among these are two iconic murals that were commissioned by James Duffy to adorn the walls of the Edward W. Duffy Company—a family pipe supply business and host for more than 40 years to some of Sestok’s early efforts as a muralist.

Now, as the proposed Gordie Howe Bridge aligns for construction with the Duffy Company squarely in its footprint, Sestok finds some of his most foundational work facing its final days. We met Duly’s Place (like Sestok himself, a longstanding Detroit institution) for breakfast and conversation—which, when you’re talking to someone as steeped in Detroit as Bob Sestok, can’t help but turn into a walk through history.

Bob and Sarah at breakfast.

Sarah Rose Sharp: So, let’s talk a little bit about the mural, first. At the point where you did the mural, the Duffy Company was owned by James Duffy?

SRS: Why? Because he was a supporter of the arts?

RS: He was a big art collector for many years, from shows at the Willis Gallery to commissioning artists to do works in the factory, which I did quite a bit of. He donated all the art that he accumulated in the factory to Wayne State University.

SRS: Are there any other works still there at the Edward W. Duffy Company?

SRS: And it’s a pipe supplier?

RS: They turned it into a tubing business, as well as pipes. There’s a lot of piping that goes into making machines run, just like at Third Man Records.

SRS: It kind of also fits with your sculptural practice, which uses industrial scraps…

RS: Well, maybe. I had more of a mechanical aptitude than an interest in industry. I worked in the auto factory in Pontiac, Michigan, so I’m well aware of industrial operations.

SRS: When I think of a quality that is quintessentially Detroit art, it has to do with that blend of aesthetics and industrial awareness. Does that resonate with you?

RS: There’s something that is a lot bigger than the industry—it’s the decomposition, the entropy.

SRS: There’s also a question of labor. The Third Man [Records] mural has that kind of connection to the work environment.

RS: It’s a manufacturing idea, and it’s an assembly line. That’s what I was thinking—the materials come in, the energy is there from the lines, simulating the power lines, and the sound waves that are being recorded into the records as they move along.

SRS: I think of you as being one of the iconic Cass Corridor artists and someone who I associate with several generations of Detroit art—do you feel like you relate to Detroit, as it’s kind of reforming itself right now, or is it alienating? In some ways, this mural being demolished to make way for the bridge is symbolic of the cost of progress here in Detroit.

RS: I’ve been all over the world, and I’ve seen all kind of things. Detroit is my home, but there’s more to my work than just Detroit. I was really impressed by the New York art movement in the 1970s and was involved with some element of artists in New York City. I came back because it wasn’t my thing. There was the density problem, and you know, here in Detroit we have a lot of privacy.

SRS: Do you think we still do?

RS: If people want it, it’s here. They just have to make a commitment to get it.

SRS: When I first came to know your work, I knew you as a sculptor, and I feel like you’ve been bringing your drawn and painted side to the forefront.

RS: When I have an idea about painting—if it gets really organic, it’s not sculptural. So I like to combine different aspects of painting, organic, and geometric ideas, into the work.

SRS: So you don’t see a huge distinction between your media, or are you saying sculpture has to do with structure?

RS: The fact of experimenting with art is a really important factor. You wonder where Hans Hofmann and Jackson Pollock and all these people would be today, if they continued to paint. Frank Stella is a prime example—he started out being very geometric and linear, and he got into sculptural things and twisting forms and airplane parts.

SRS: To hear you talk about the pipe mural [at Third Man Records], where you’re sort of inspired by something very direct, but then it takes on this layer of abstraction—do you think that’s often the case with your work?

RS: Yeah. I got involved in doing portraits of people and really being influenced by my heart and my feelings, and then putting that into photo projections that I drew out and traced out and painted. It’s all experimentation and looking to see what possibilities exist for me as an artist. I don’t do things forever. We just go through phases.

SRS: How much are you working these days?

Sarah is a Detroit-based writer, activist, photographer and multimedia artist. She writes about art and culture for hyper-allergic, Flash Art, Art in America, Artslant and others. She is a 2015 Kresge literary arts fellow for arts criticism and was selected as a participant in the 2015 art writing workshop facilitated by AICA/USA and the art writers grant program. She has shown work in New York, Seattle, and Detroit—including participation in the 2014 Ofrenda group show at the Detroit Institute of Arts—with a solo show at public pool in November 2016, and another at Simone Desousa gallery in January of 2017. She's primarily concerned with artist and viewer experiences of making and engaging with art, and conducts ongoing research in the state of contemporary art in redeveloping cities, including a process blog called “breakfast with the artist.”