Cakes and Bakes for the Neighborhood Where Fashion Rules

Good Cakes and Bakes’ Story of Success, Passion, and Revitalization 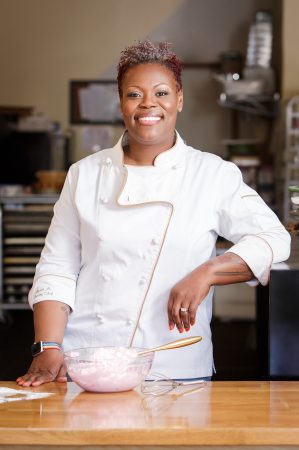 Salted caramel cakes, vegan brownies, and carrot walnut breakfast breads are just the beginning of the mouthwatering menu found at Good Cakes and Bakes, located in the historic neighborhood, Avenue of Fashion. The sweet and dreamlike pastries, though seemingly effortless in flavor, have a story, a mission of inclusion, behind them.

Detroit neighborhoods face a difficult task as the fingers of gentrification inch throughout the city. As larger box stores are brought into the downtown area to cater to the transplanted, white demographic, neighborhoods have continued their struggle to uphold their community and history. For pastry chef and co-owner of Good Cakes and Bakes, April Anderson, the neighborhood where her bakery is located is the main focus.

Anderson found her love for baking through the smiles of family and friends as they tasted her treats. As she grew older, though she would have loved to make baking a career, it didn’t serve as a career of any real financial stability. She comments on this, saying, “There was no food network channel, so saying I wanted to be a baker would have been like saying that I wanted to work at McDonalds.” Anderson decided while keeping baking as a back burner passion, to attend school for corporate accounting and worked in financing for 17 years.

Near the end of her years in financing, she did go back to school for pastry arts at Macomb Community College to gain knowledge for her newly founded food blog. “I really wanted to know how to develop my own recipes like I was seeing in other food blogs.” She didn’t realize her interest in actually owning her own pastry shop until roughly halfway through her schooling.

Born and raised in Detroit, Anderson had always known that if she were to ever open her own business it would be in the city she called home. In 2013, Detroit Economic Growth Corporation, was distributing grant money to revitalize historic or run-down areas. Anderson, after learning about this, applied. She, along with her wife Michelle, was able to attain the grant money and begin Good Cakes and Bakes on Livernois on the Avenue of Fashion.

The Avenue of Fashion, at its beginning, was a thriving neighborhood, servicing Motown stars who lived in the area. It featured high-end designers and boutiques who catered to the stars in terms of its namesake, fashion. In the 1980s the highly trafficked area began to experience financial difficulties as malls opened and took business from the shops along the corridor. As time continued, many stores closed, unable to support themselves. When Good Cakes and Bakes opened in 2013, only 91 days after Anderson left her job, the pair made it their mission to serve the community as not only a pastry shop but also a gathering place. “At the time,” says Anderson, “there were no places where people could come and do work.” This was a communal need Good Cakes and Bakes was happy to fill. “We pride ourselves as being a community space, a place where the community can come,” she says. 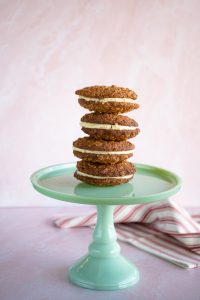 TASTY TREATS MADE AT GOOD CAKES AND BAKES

Anderson and her wife were able to open the business, staffed with the two of them and Anderson’s mother. As time went on, however, and as profits grew, they were able to hire staff and provide jobs for people in the neighborhood. Staff has been hired from all over, yet the open positions are always included in the neighborhood’s paper before posted publicly. An intentional investing action to not only help the neighborhood, but to keep the neighborhood closely knit, and, in some ways, sustainable within itself.

Anderson speaks about the mayor in office, Mike Duggan, saying he, “has made it his priority to revitalize and generate improvements in, not just Corktown and downtown, but also the neighborhoods.” To her, seeing the investment to help the businesses and the corridor itself has been encouraging. She says that this financial help has influenced the community around the Avenue of Fashion to make sure that the businesses have the ability to welcome everyone and are well rounded, specifically, in social media and communication with the ever-changing demographic of the community they are serving. Detroit media reports that this financial assistance is not helping the areas around Detroit of lesser income but in fact continuing, at a higher rate, the racial and financial segregation in Detroit. They say investment and pushed gentrification is bringing forth a city that natives can no longer afford.

As Good Cakes and Bakes’ success story continues, Anderson recalls the amazing opportunities she has had throughout the pastry shop’s lifetime. She has been featured on Food Network, Cooking Channel, Eater Detroit, and more publications and shows. She also mentions her inclusion in the Equity at the Table’s (EATT) database which provides a list of those in the hospitality industry around the world who are in the LGBTQ+ community and or are people of color. These opportunities have helped not only Anderson to fulfill her dream but serve as an inspiration to those of many demographics and lifestyles to follow their passions.