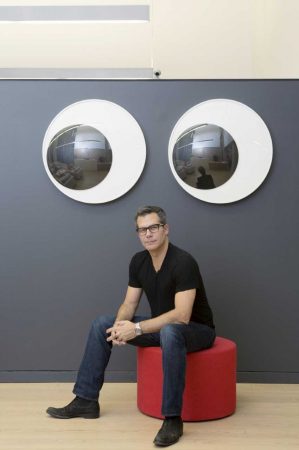 Even if you don’t know the name Richard Florida, you’ve probably heard of him. In 2002, he coined the term “creative class” with a book by the same name and has since been both championed and derided as the person responsible for the burst of “creative” everything from intentional artists spaces to colorful tech companies that come with amenities such as cereal and play.

In 2017, he released The New Urban Crisis, a book in which he revisits ideas set forth in his first book as well as its real life consequences. Or, more aptly, how the world has changed since 2002. Adjectives used to describe Florida include: thoughtful, humble, and ambitious.

For anyone interested in Detroit’s growth, we recommend diving into Florida’s work.

We caught up with him in town for the thought-provoking City Lab conference—the organization he co-founded and serves as Editor-at-Large for.

Detroitisit: You hold the title of “urbanist.” Please explain to us what the role of an urbanist entails?

Richard Florida: As a professor and urbanist, I have the opportunity to help shape the field of urbanism, economic development and city building by offering insights on how to build greater creative and more inclusive communities. It’s my greatest hope that my work will inspire a new generation of city builders.

DII: What was your starting point? How did you get interested to begin doing the work you do?

RF: As a sophomore at Rutgers College, I took a class in urban cities and geography. It changed my life. My professor gave us an assignment to walk the streets of lower Manhattan – Little Italy, Greenwich Village, Soho and more – and to write up what we saw. I was hooked. I found my love of cities, I knew I’d become a researcher and a scholar.

DII: Social and economic inequality are topics you fervently foster. Why do you believe they are both such critical topics to take ownership in for cities and those that occupy them?

RF: The ongoing urban revival has spurred a New Urban Crisis, which is different from the old urban crisis of the 1960s and 1970s. Today’s crisis is one of growing inequality, segregation, and sorting that is taking place within virtually every city and regions across the country.  It is marked by the disappearing middle—the fading of the once large middle class and of its once stable neighborhoods, which were the physical embodiment of the American Dream.

To combat these challenges, cities must embrace an approach of inclusive prosperity, an approach that seeks to shift urban economic development strategy away from one that views equity and growth as mutually exclusive toward one that recognizes the central role of equity in economic progress.

DII: Suburbs or Downtowns—give us your sense on both, where do you see economic mobility, population, innovation, moving and why?

RF: Both. We live a time of where we are seeing a “Patchwork Metropolis,” where both suburbs and urban environments are thriving, while other areas are falling behind. The areas that are thriving – attracting talent, investment and innovation – are walkable, diverse, have access to community amenities such as public transit, green space, great restaurants and are often near anchor institutions like large companies, universities, or cultural centers.

DII: You gave rise to the point that human creativity powers our economy. What role do you see citizens playing in the city of today? Tomorrow?

RF: Yes. As I wrote in The Rise of Creative Class, every single human being is creative. Economic growth is driven by creativity, so if we want to increase it, we have to tap into the creativity of everyone.  It is our duty to work as a collective community to empower an approach of development that taps into the skills of all citizens.  That principle is at the very core of inclusive prosperity.

DII: What level of responsibility do you believe corporations and organizations have to the ecosystem they are a part of? Towards employees? Stakeholders? Consumers of their brands?

RF: Cities have much to gain from inclusive prosperity as described above but so do tech companies and large employers.  A large number companies are seen as driving the New Urban Crisis. As their brands come under growing criticism, it is in the interest of these companies to be better urban citizens. By embracing inclusive prosperity, companies can address the growing backlash from local communities and improve their own tarnished brands by becoming engaged partners in building more inclusive and equitable communities.

DII: What’s your connection to Detroit?

RF: My wife’s family is from Detroit. We are here often for holidays and visiting them.  We love this city and are thrilled to see its revitalization coming to life.