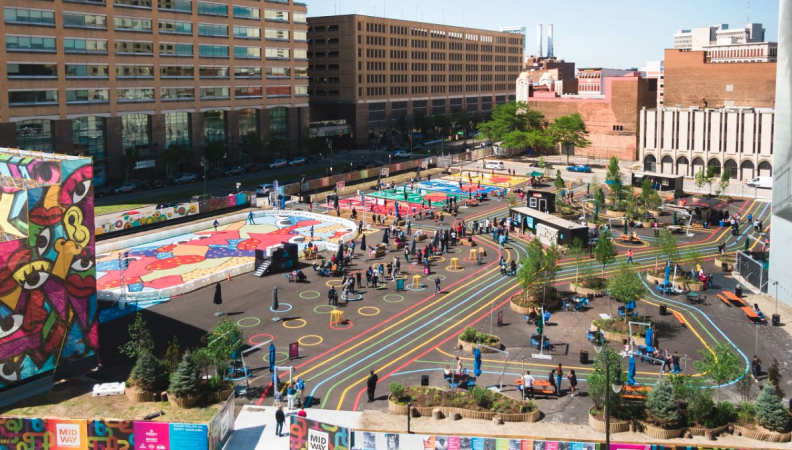 Remember those sun-soaked summers as a child when you spent warm days running through the sprinklers, shooting hoops in your driveway, skating on the sidewalk with friends, playing games on your front lawn – making cherished memories that have lasted a lifetime?

Imagine revisiting these activities, feeling like a kid again, simply letting go and laughing and making new summer memories in a space that was not long ago, a parking lot in the center of downtown Detroit.

When downtown Detroit corporations and small businesses from both private and public sectors, nonprofits, and the community at large converged in 2020 with a mission to convert this lot into a gathering spot for residents and visitors – the genesis became an authentically Detroit, deeply-immersive and experiential recreation hub that symbolizes what the city is – and has become. 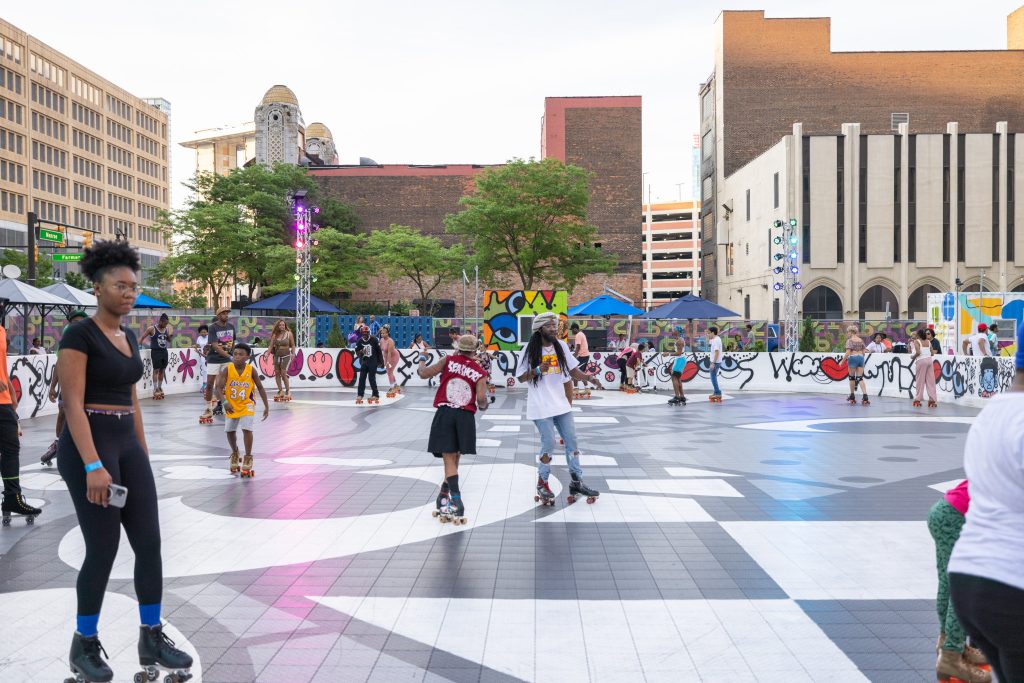 Featuring Rollout Detroit, an open-air roller rink operated by southwest Detroit’s RollerCade, The Rocket Mortgage Sports Zone including basketball courts and a multi-use sports court, a 9-hole mini-golf course, vibrant graffiti murals by renowned Detroit artists along with food trucks, live music, and daily programming, Monroe Street Midway is back for a second Spring/Summer activation and is more robust than ever.

“After hosting over 100,000 visitors last summer, we asked ourselves ‘what can we do better?’ We then went to work, and the team is excited to share the culmination of these new ideas and efforts as we launch the 2022 season,” said Bedrock Director of Strategic and Community Partnership, Leona Medley. 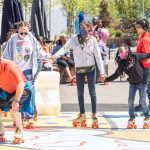 Monroe Street Midway is essentially a continuation of Bedrock’s multi-million dollar “Decked Out Detroit” initiative in partnership with the Rocket Community Fund and the City of Detroit, along with operating partners RollerCade and Come Play Detroit. During the 2021 and 2022 winter months, the space operated as Monroe Street Drive-In a movie theater powered by Emagine.

The progression from concept to initial activation to now, year two, has involved unprecedented partnerships, passion, and creative thinking.

Bedrock secured 32 Monroe Street for the Monroe Blocks Development, a high rise to include apartments, retail, entertainment, and dining. The project broke ground in December of 2018 but was then paused.

In 2020, driven by the need to re-energize the economic landscape for retailers and businesses during the pandemic, as well as offer outdoor, safe gathering spaces for residents and visitors, the team began to consider how they might activate the currently under-utilized space. The Drive-In came first followed by concepts for a Spring and Summer activation.

“We started looking at things that people can safely participate in, that also align with Detroit culture, and an outdoor roller rink was the aha moment,” said Medley.

Bringing to life an environment that safely facilitates and embodies Detroit’s long-standing and rich connection with skating became the absolute perfect solution.

The nation’s oldest black-owned roller-skating rink, RollerCade, was secured to develop and run the city’s only outdoor rink. 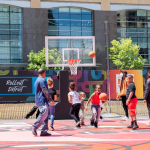 RollerCade opened on Jan. 9, 1955, in the midst of the Civil Rights era, has managed to keep operating despite decades of population loss and disinvestment in Detroit. The rink has been a popular destination and a place for the community to gather since it opened.

“I’m honored to be part of this collaboration and to be able to help extend the roller-skating culture of Detroit to the next generation,” said Kyle Black, third-generation Owner of RollerCade. 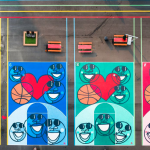 Incorporating the Rocket Sports Zone, operated by Come Play Detroit, the city’s largest sport and social club, made perfect sense too. A successful basketball activation in Cadillac Square since 2014, the Sports Zone is a natural extension of what Midway personifies, and a great fit for Rocket.

“The Midway is a holistic opportunity for the Rocket Mortgage Sports Zone. Partnering with a larger activation where court sports are a component of an inclusive, safe, vibrant recreational space completely aligns with all of our missions,” said Gilbert Family Foundation Director of Public Space, JJ Velez. 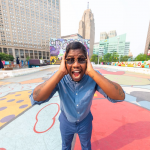 The next priority became energizing the space visually. In the vein of paying homage to and lifting local talent, some of Detroit’s most iconic artists were enlisted, including multidisciplinary artist Sheefy McFly, artist and muralist Phil Simpson, contemporary artist Olivia Guterson, and poet Jessica Care Moore.

Their remarkable work both exemplifies the culture of Detroit and brings vitality and inspiration to the space.

And what would a space like this be without music? Bedrock partnered with local vinyl DJ label Rocksteady Disco to be on-site every Friday night with DJs spinning vinyl – which in and of itself has such a strong subculture and presence in the city.

Detroit is one of the few places where mixing vinyl is still in our DNA. It’s every DJ’s dream to play records to a great crowd for five-plus hours, but there’s not always a venue to do that, so we’re really excited that Bedrock has given 11 of the city’s finest selectors a chance to musically spread out and do their thing on shiny sheets of black plastic.

A UNIQUELY DEEP COLLABORATION BETWEEN BUSINESSES BIG AND SMALL 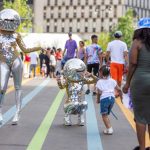 across private and public sectors and large and small businesses to get it right,” said VP of Bedrock Experience, Frenchy Eid.

Medley adds, “The surrounding community and local businesses are also key stakeholders. They have a front seat in planning and are continually involved in establishing an activation that’s the right thing for everybody.”

At the crux of the Monroe Street Midway is the fact that it truly represents Detroit.

The team has come together in a really intentional way to focus on a mission that is ‘for Detroit, by Detroit, in Detroit.’

JJ goes on to share, “The Gilbert Family Foundation embraces a mindset that the best, most inclusive and creative results are derived from tying as many internal and external threads together as possible, and this project epitomizes that in every way.” 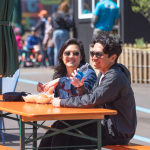 From a small business perspective, Kyle Black, Owner of RollerCade weighs in, saying “Bedrock and team have brought the best of the best together, and tapping into these collective resources continues to facilitate a remarkable outcome.”

About the collaboration, Justin Jacobs, Owner of Come Play Detroit shares his excitement, “It’s a dream team. Bedrock has empowered small businesses like myself and RollerCade to do what we love – engage around play and sports – in a much bigger way than we can do on our own.”

Open for the 2022 season on May 27th, the Monroe Street Midway offers a new and improved roller-skating rink, two new full basketball courts, a multi-use court, a 9-hole mini-golf course, a covered pavilion with a performance stage, a Pop-up Shop operated by Playground Detroit and a large grass area for the whole family to enjoy.

Also new this year is daily programming during the week for youth groups and summer camps including transportation via bus to the site. The Sun Mint Artist Guild will host arts and crafts, the Detroit Chess Club will offer lessons and games. Additionally, 100 percent of the site’s artwork is designed and painted by local Detroit artists, including Sheefy McFly, Tony Whign, David Rubello, India Soloman, and Olivia Guterson. Other programming includes basketball clinics, Soccer training, tons of live DJs, performances, and more. 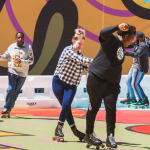 “We look forward to welcoming kids from neighborhoods all over Detroit this year, bringing them downtown to play and enjoy,” said Jacobs.

THE MIDWAY VISION FOR DETROIT, ITS RESIDENTS, AND VISITORS

The vision for the Monroe Street Midway at its core is to offer inclusive and safe recreation. A place to play.

The outcome has exceeded expectations, and the partners weigh in with their thoughts;

Last year was phenomenal. Collaborating over the winter months and then seeing it come to life with people coming down from the community, all the surrounding neighborhoods, and even out of towners to be a part of this thing that is so uniquely Detroit was really special. 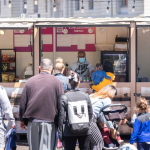 “We were thrilled to be able to give the local artists and talent national exposure via the Midway,” said Eid. “This is a place people talk about, and that has served to elevate and shine a spotlight on the artists, Detroit’s long-standing roller rink, RollerCade, and Come Play Detroit.”

“The Midway epitomizes what’s happening in Detroit. These distinctive experiences can be conceptualized and executed in our city like nowhere else in the world,” said Velez.

“As someone who’s lived in the city my entire life, it means the world to see people of all ages and colors and backgrounds smiling and recreating in a place that’s uniquely Detroit,” says Black.

Shares Jacobs, “Monroe Street Midway gives the city a sense of pride. This is a nationally recognized activation and it’s something we can all partake in and be proud of.”

The partners collectively anticipate a 2022 season that continues to exceed when it comes to programming, attendance, and the overall offering.

So…come and gather with other Detroiters this summer. Take in the artwork, food, activities, and entertainment. Relax with friends and listen to the laughter and energy of the city. Take a spin around the rink. Come out and play at Monroe Street Midway! We look forward to seeing you there!