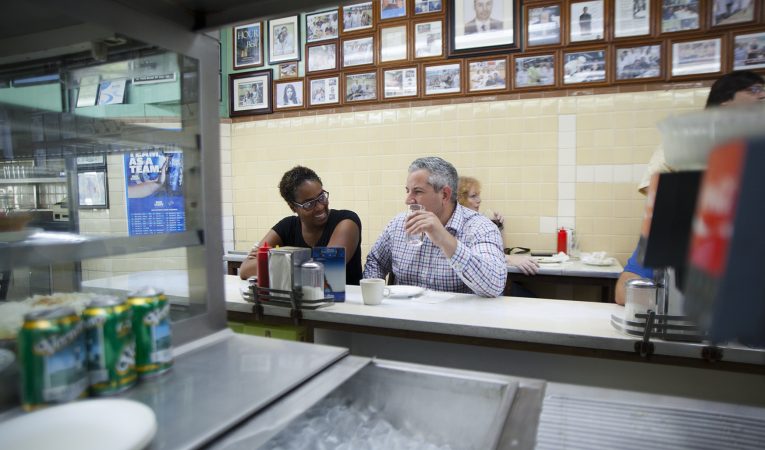 Lafayette Coney Island: One of the prerequisite, line out the door, late night coney shops that every Detrotier has eaten at once and every tourist needs to step inside of on their travels through the city. We get the details with Regina Gaines.

Scott Rutterbush: Why Woodward, Why Detroit, Why Wine?

Regina Gaines: I’ve been in the spirits industry since I graduated college. So that’s what I know.

Secondly, the city and the state was branded as dysfunctional. We are known as the auto capital, but we have this great agriculture industry specializing in wine with vineyards popping up around Michigan, and nobody really seemed to know. In the U.S. we’re number five in grape production and eighth in terms of the number of vineyards. If you follow the latitude lines due east, you’re hitting some of the greatest regions of France, and west you’re hitting some of the greatest regions of California. So, there’s more to us than being the auto capital of the world. It’s great to be able to be a part of redefining and to bring a new element most Michiganders don’t even know exists.

Also, to bring something sexy and sleek to Woodward. I’ve lived in Houston, NY and LA, gone to college in Atlanta, and I’d go places and I always missed the people in Detroit. I wanted to find a way to bring sexy to Detroit. I thought that was what was key. I wanted to bring lifestyle to Detroit.

When I moved into my dorm in my freshman year Atlanta was awarded the Olympics so I had a front row seat to watching that city reinvent itself. The way they conduct business and the number of African-Americans in business impressed me. They had Mayor Jackson. We had Mayor Young. There are a lot of parallels to the cities and I wanted to know why we weren’t winning and they were.

SR: How did other people contribute to your entrepreneurial spirit?

RG: My family. I come from a family of entrepreneurs.  What people don’t realize is during the 50s-90s Detroit produced more African-American millionaires than anywhere in the United States. Our athletes are top of the game – Jalen Rose, Chris Webber, Derrick Coleman, Steve Smith. When you watch TNT all those players talking about Detroit are from here or played here. They brought that swagger. Great business minds are here. I sometimes feel that message gets lost.

RG: If you look at the owners of the Clippers, the owner of Jet Blue, Southwest, Quicken Loans, Uptown Magazine even Vibe Magazine, they all have roots from here. We’re still making our mark on the world. We’re part of this global synergy, it’s just often not being done from here. But, Detroit swagger is having global impact. We have the know-how. This is one place where you can be all you can be without going to college. We have Harvard here in the form of the streets where we learn business and what the unions provide for certificates. When people talk about human capital, that’s the biggest asset for Detroit. That’s the best thing about us. We’re knowledge seekers. We look at the world from the process of the assembly line, but at the same time we feel like anybody can participate. That’s what makes us cool.

SR: What surprises you about the interaction with the public and with Detroiters?

RG: Customers seem so appreciative we’re doing what we’re doing in Detroit. Sometimes you go places and customers feel like we owe them. In Detroit it’s the opposite. People thank us. They ask us how our day is going. That’s rewarding. When you’re a small business, you can’t pay employees what they could be making elsewhere. I’m so grateful they have that faith in us. That’s what motivates me. That employees will sacrifice and figure out a way to roll with you, that’s unbelievable.

RG: I think my proudest moment is HOPV. I’ve made money and lost a ton of money. I’ve had some great successes. But, this is my proudest venture because it keeps me humble and appreciative, and everything is incremental. The opportunities are endless.

SR: And your next five years, what do they look like?

RG: A signature store and franchise it. I want to do it in a way where the people who are with me now gain equity. I think I am realistically about two years away.

SR: What do you see changing around you over the next 5 years?

RG: I see this city turning back into a global city that people want to come to. One thing I’m surprised at is Detroit hasn’t lost its looks. The D has become the forefront of the brand. We’re going to keep our voice and our grit about us, and I don’t ever see that changing. Sometimes when cities like us lose our way, they can lose their identity but we didn’t do that, we kept our voice. I need to give a lot of credit to Oakland County because so many different cultures and races have come together. That made keeping our voice easier, and being able to experience has made it easier for us to integrate it into Detroit. Our social issues: we knew we were going to have those together with economic disadvantages, but I give a heads-up to the corporate private partnerships. As a single mom and African-American, to be able to get a loan and finish law school is amazing.

I think Detroit has done pretty good. We’ve been able to find hope. That’s what I focus on.