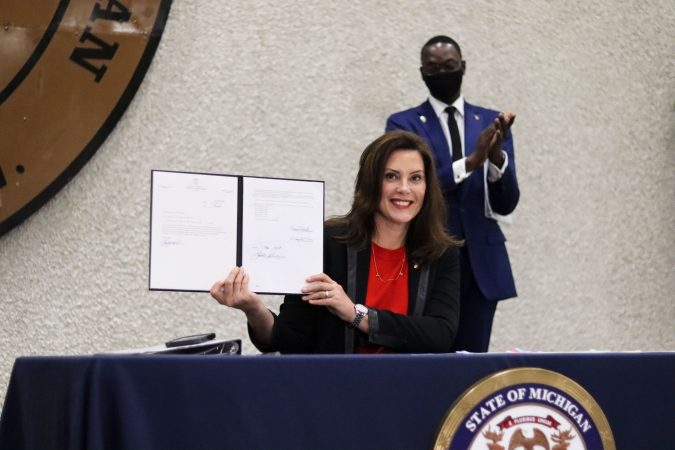 After Michigan became the latest state to legalize cannabis in 2018, Govorner Whitmer made the expungement for marijuana convictions one of her key campaign promises. Following-up on the 2018 promise, the legislation signed by Whitmer will clear any offense that “would not have been a crime if committed after December 6, 2018, when recreational marijuana use by adults became legal in the state.”

This is a historic day in Michigan. These bipartisan bills are a game changer for people who are seeking opportunities for employment, housing, and more, and they will help ensure a clean slate for hundreds of thousands of Michiganders,” shared Governor Whitmer. “This is also an opportunity to grow our workforce and expand access to job training and education for so many people. I am proud to sign these bills today alongside Lieutenant Governor Gilchrist and many of the bipartisan leaders who worked on them.

“This anti-poverty, pro-job opportunity Clean Slate legislation will reinvigorate the economic potential of hundreds of thousands of Michiganders whose records have hindered their availability to get a job or secure housing, and it will help us grow our workforce,” added Lieutenant Governor Garlin Gilchrist II. “This is the right thing to do on behalf of people everywhere who deserve another chance and will help improve livelihoods. There is more work to do, but Michigan has now established itself as a leader in removing barriers to economic opportunity for people who have made mistakes. I will continue to stand tall for Michiganders across the state who need someone in their corner.”

Cited by the governor is a study conducted by the University of Michigan law school published by the Harvard Law Review, which found that people who are eligible for the expungement of past crimes “see a 23% increase in income within a year.” Such a move would mean well for Detroit communities, where some struggle with access to employment and low wages due to past criminal convictions.

Reaching out to the American Civil Liberties Union chapter in Detroit, the law organization responded that they are “thrilled” by the governor’s order.

“Too often our laws punish people long after they have served their sentence. We are thrilled that Governor Whitmer signed the Clean Slate bills as they will open doors for thousands of people in Michigan who couldn’t get jobs or housing because of their criminal record. Everyone deserves a second chance and that’s what these new laws will provide,” shared ACLU Policy Counsel Kimberly Buddin when reached out to for comment.

Outlined in a press release put out by the State of Michigan, the changes to House Bills 4980-4985 and 5120 consists of the following points:

“Thousands of Detroiters who want to work and be a part of Detroit’s comeback have been held back for too long because of mistakes they’ve made in their past,” stated Detroit Mayor Mike Duggan while responding to the passing of the legislation. “Thanks to the Governor and our state legislators, more than 80,000 more Detroiters now will be eligible to have those past mistakes removed from their record and a chance at a new start. Detroit’s Project Clean Slate has helped hundreds of people get their records expunged already. It’s free, helps clients through the entire process, and connects them to opportunities through Detroit At Work.”

Detroiters can learn more about expungement opportunities as well as project clean slate on the City of Detroit Website.