Detroit Graffiti and the Writing on the Wall

Aerosol Artists Embody a Story, a Moment in Time, While Building a Destination in the City 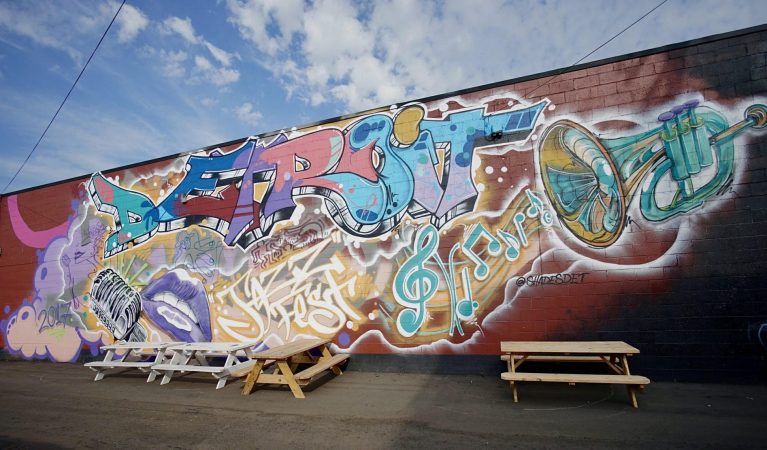 Bright colors dissolving into the walls of crumbling buildings, floral-like lines and swirls peeking out from under bridges, and tags of artist’s names filling alleyways throughout the city. In Detroit, murals and graffiti are everywhere, beautifying this city many of us call home. But underneath every paintbrush stroke and between every spray from an aerosol can, there lie distinct political truths.

Graffiti has been political since its contemporary inception. Beginning in the 1960s and ’70s, graffiti was used by political activists and gangs to gather exposure for themselves, their cause, and their passions. Doing so was an illegal act, pushing it to start on an already polarized foot. 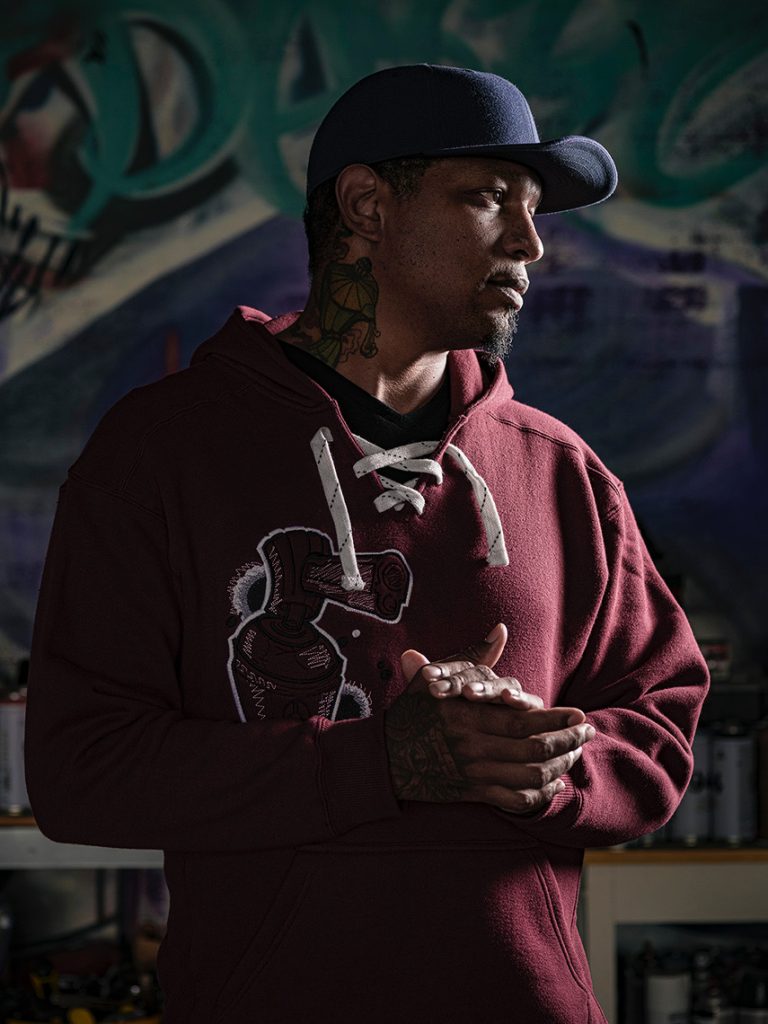 For Antonio “Shades” Agee, one of Detroit’s first graffiti artists, graffiti was about displaying his art, having fun with colors and

designs, and beautifying Detroit. In these efforts, Shades and other artists at the time seemed to have a sense of reclaiming the city for the individual by resisting conformity and policing. This paved the way for today’s graffiti and mural artists in the city.

Shades sees graffiti art as political, though it has become diluted since the beginning of his own graffiti career. “I had to fight for people to understand that graffiti art is art, and nobody knew that, they just saw it as vandalism,” he says. “Everything evolves and dilutes itself because it becomes more involved with different nationalities, different cultures, different ethnicities… it just becomes this thing that becomes worldwide, you know what I mean? So you can’t stop the evolution of it being watered down.”

Shades doesn’t see this natural watering down as a negative, however. He instead focuses on how it provides the next generation of graffiti artists with more abilities, opportunities, and less restrictions than he faced during the beginning of his career.

This next generation is exemplified through muralists like Tashif “Sheefy McFly” Turner and Lindy “Marshew” Shewbridge.

Sheefy always wanted to be an artist, but when he stayed in Eastern Market and saw Murals in the Market for the first time, he knew he was meant to be a muralist. As he found his style, he was able to participate in his own ways to the beautification of Detroit. Soon enough he was being hired to paint murals throughout the city and is now contracted to design one of the glass murals for MVRDV’s planned addition to Eastern Market. 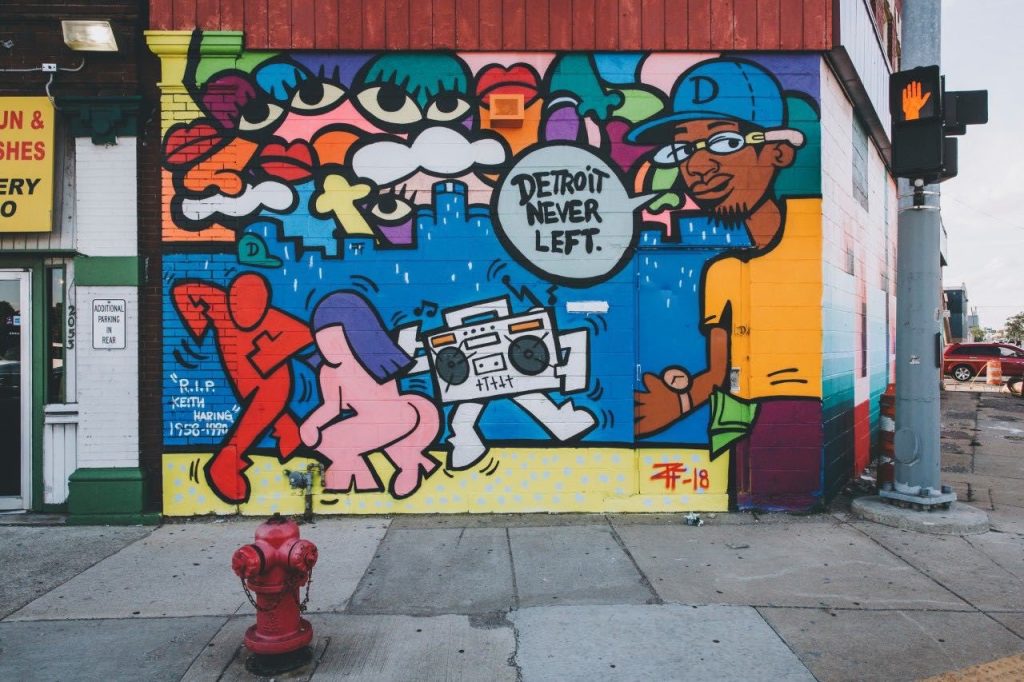 But even as Sheefy found it easier than Shades’ beginning days, he found that graffiti and mural artists still aren’t respected in the ways he believes they should be. In 2019, as he was working on a public mural he was hired to do for the city, Sheefy was arrested by two police officers. They accused him of vandalism, and without his forgotten permit, Sheefy was unable to prove innocence until the following day.

This incident helped spur Sheefy’s art style and voice. “It showed me the stigmas… but it shed the light on the ignorance of the beauty of murals in Detroit,” he says, “So I feel like with that it helped give me power to actually speak about and to help, I guess change peoples’ minds.” 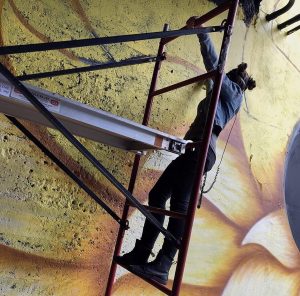 viewpoints and putting forth positive energy, grounded in his emotions. When he heard of George Floyd’s death, and Black Lives Matter Protests began spreading throughout the country, he made canvas protest signs for people to hold. “We need to be voicing our opinions,” he says, “the raw truth needs to be shown and artists can do that.”

For Marshew, expression of the political is not as stark, but just as vibrant. To her, individuals’ interpretation of her colorful, swirling murals often comes out in two different ways. “I think it’s actually pretty quiet or pretty loud spending on how you read it,” she says. “I think it can be quiet in the sense where you do get the sense of the individual…. You can be trained to think in certain ways where, you know, you are just used to your day-to-day.”

She continues, “Having a moment where you look and you see something that’s just completely different, or you’ve never seen something like that before, or [it] reminds you of something is my way of challenging the viewer, challenging someone to think for themselves. In a loud way it also is kind of a bit of a statement in some sense for a woman to be painting something that, you know, is unrecognizable, that doesn’t really have its own label in a way…. In a sense, it has its own kind of individuality.”

From fleeing sirens in the middle of the night to being hired by the city to paint a mural, Detroit’s public art scene has seen a lot of changes over the years, but the heart and gumption of saying the unsaid, of challenging the unchallenged is still ever-present. It seems no matter how graffiti and mural art changes, the deep-seated politics, the fight against conformity, the push for beautification, will always remain.