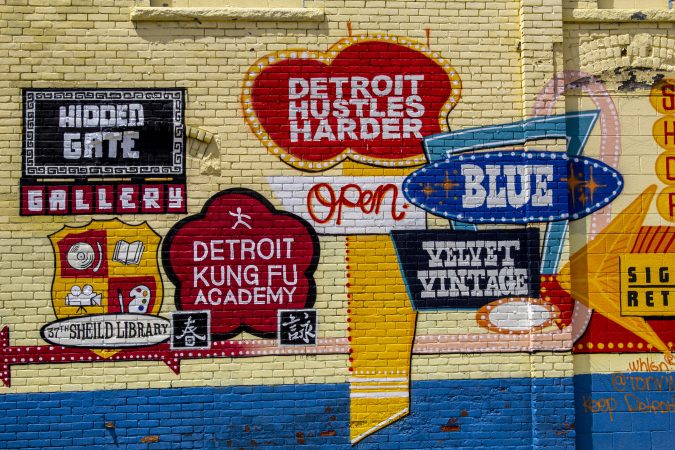 If there is one thing that’s certain about the spirit of Detroit, it’s that few cities hustle harder than the people do here. This idea is embodied in the culture, practice and name of the popular clothing brand, Detroit Hustles Harder, who also happens to be opening a new storefront.

The popular Detroit-based clothing company has a new place to call home as they, somewhat officially, open the doors of their new flagship storefront in the historic Eastern Market. After a low-key opening in June, the company is planning a more significant celebration this Saturday in the Market that will feature various food options, music, a promotional sale and activities.

“The decision behind this move was an easy one,” said Brendan Blumentritt, co-owner of Detroit Hustles Harder. “When FIRM Real Estate became our new landlord, we were given an opportunity to move into a ground-level space, which was what we had been trying to accomplish in Eastern Market for the past five years.”

“We jumped at the opportunity, and we were able to move into a fully renovated space. Firm did what was in our best interest and provided numerous offerings previous landlords did not. Our brand has a lot to offer Detroit, and the city, in turn, has a great deal to offer us. We are excited to showcase that through this move.”, he continued. 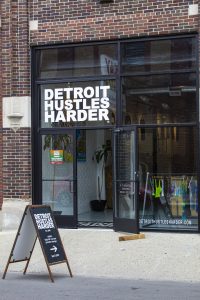 Detroit Hustles Harder in Eastern Market as seen From outside. Photo: John Bozick

Also known as the Division Street Boutique, the new location will be more accessible and better suited to accommodate wheelchairs, strollers and wagons. The site will also offer an exciting new chapter for the popular community organization and clothing company.

Joseph O’Grady, a co-owner of Detroit Hustles Harder, believes good times are ahead not just for his organization, but for the brand and all of its collaborators.

“Being back in this space is very exciting for us,” he said, “The location will increase foot traffic. Being able to showcase pieces to a bigger audience ultimately trickles down to greater exposure for the artists and collaborators we’ve been doing business with. This move is a win for everyone.”

Printing and selling merchandise for the past 12 years, Detroit Hustles Harder authentically works with grassroots artists in Detroit, giving them a place to display their talent that is close to home. The brand is also committed to preserving the historical integrity of Eastern Market as well as sponsoring festivals and non-profit events such as The Michigan Glass Project, Movement Detroit and Murals in the Market.

With the summer line fully stocked and previous collaborations still available, Detroit Hustles Harder will be open Tuesday through Sunday 10 a.m. to 5 pm at 1353 Division Street in Eastern Market.