An Interview with the Woman Behind the Mission 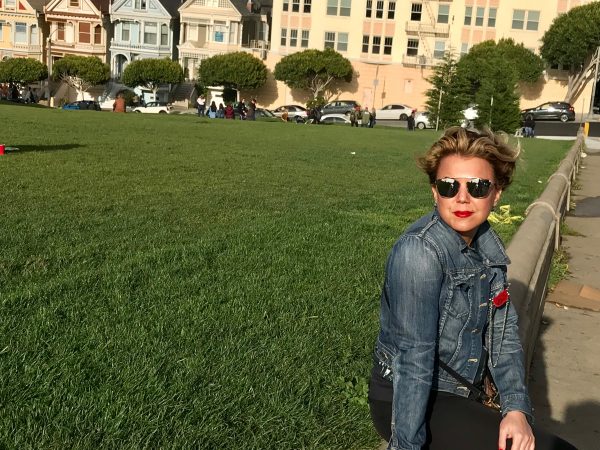 Last week Creative Mornings Detroit asked our founder, Ivana Kalafatic, to give a talk on commitment. Big word, right? Bigger concept. And she nailed it. And I was reminded of her awesomeness. That thing that happens where you take for granted those with whom you spend most of your time? I am totally guilty of that.

It is with great pleasure that I present to you this interview of my friend, mentor, and one of the most-committed-to-Detroit people I know.

“The other part of my childhood was a mix of summers spent on beaches on the Adriatic—teenage date nights walking to open air theaters in medieval little towns, guitars, and playing with a big group of friends we all grew up with from all sorts of European countries.”

CV Henriette: Are you from Detroit? Tell us about your early years. What made you?

Ivana Kalafatic: I do consider myself made from Detroit—although not born here, I was raised here. Well, from Metro Detroit, actually the ‘burbs. My family, especially my mom, was always taking us to theater, museums, shows in the city. We had many friends that lived in the city, and I’d often play with their kids growing up. The other part of my childhood was a mix of summers spent on beaches on the Adriatic—teenage date nights walking to open air theaters in medieval little towns, guitars, and playing with a big group of friends we all grew up with from all sorts of European countries. I had a very beautiful, full, and innocent childhood compared especially to today’s standards, with family, friends and lots of things always going on. If I remember correctly, the first international flight I took by myself I was seven. I was brought up to be a very independent child, from a very liberal home. I think that aspect of being around multi generations—lots of activities, into sports, along with living with the world’s coolest single mom, helped shape my sense of curiosity and adventure. I was always looking for adventure, always the one looking for that thing to do.

CVh: Many people know you from Clear Magazine, but they may not know you had started in a different career path before that. How did that business prepare you for your next professional stages?

IK: Prior to launching Clear, and after college, I worked at the Justice Department in Washington D.C. and after that in Corporate Communications at GM. Working in the public space and in a large corporate setting was very exciting for me, but I also felt contrived in that environment— like I inherently needed to be the one calling the shots. I was given the nicest send-off party by the GM team complete with new Quick Books software. I guess they too saw my entrepreneurial calling! At that point I officially formed a jewelry company which I had already started as a hobby and that lead to the founding of Clear. Kinda obvious path to publishing right?

“I also knew from a young age that you can’t get anywhere without a team that believes in the greater mission and to work with a sense of empowering one another.”

CVh: Clear Magazine. You started an international lifestyle magazine in Detroit before there was an international scene in the ‘00’s. It was a unique success. So much so that it allowed you to have offices in NY, LA, Milan, and to travel the world. How did such early success shape your life? Your relationship with Detroit?

IK: The one thing I always knew I had to strive for was quality—and the opportunity to share with others what I found interesting. I also knew from a young age that you can’t get anywhere without a team that believes in the greater mission and to work with a sense of empowering one another. We were honestly learning as we went along. My former experience in automotive is something I carried throughout my career, and it was due to the belief the big three had in us that we were able to market the magazine that way we had. A lot of success comes from others believing in you and you delivering on those beliefs. Those are values I carried then and still carry with me today. I strive to do the best I can in any situation I find myself in. Ultimately, we’re each accountable to ourselves. I’m also accountable to my team and those that believe in working with us. As for Detroit – it was a city that gave me my start. I formed my foundation here. I shaped my visions here. It was great that I left for NY and LA and Europe when I did, and now I’m grateful to be back in the throes of the excitement of energizing this city we find ourselves in.

CVh: Fast forward through executive courses at Harvard Business School, and a thriving consulting career—how did DII come about? Why DII?

IK: Publishing and editing allowed me to form incredible relationships on a global level in all sorts of fields. I then wanted to know how to work with those relationships, on my own, without a product to sell – rather just my talent to sell. HBS and my career after Clear paved a path to consulting for many exciting clients, brands, agencies, and projects both national and global. DII is a culmination of my almost 20 years of doing what I’ve always done – connecting, inspiring, engaging. Except now I’m doing in through the platform of cities and the missions they encompass through their communities and unique stories. This could not be a more exciting time to be shaping the dialogue of cities, starting with Detroit.

IK: I have enough to keep me busy with the now! I’m not yet ready to focus on what’s next!

CVh: You seem to be tied to animals and the environment in an intrinsic way. Why so?

IK: I believe in the core of things. What I mean to say is I believe in the essentials, the core foundations of things, and of stripping things to their most basic formula. I think, and now I know because I’ve seen it myself, that we as humans have moved far, far beyond the core of things. That’s why the environment and animals are so important to me. Not only is each species part of the habitat they encompass, there are never too many, nor too few of them, and there is never too much forest or too little beach. There is always just enough. It’s us humans that consume for our own needs, for consumerism’s sake, for greed. Call it what you will. I call it selfishness. We shop at Costco and drive down six lane highways not thinking of the impact every one of our moves has on the ecosystem at large. That’s why I feel so greatly for the natural world around us. We need to save and support it, not demolish it. And I want to do my part in taking any—and all—actions I can towards doing that.

IK: I usually have three to five paperback books next to my bed, where I like to read a few at a time. But I also don’t always have the chance to actually read through them because a few pages in and I end up falling asleep! But the two I most recently made it through—front to back—was a reread of Hemingway’s “A Moveable Feast” and Theroux’s “Dark Star Safari.” I’ve also been dabbling back in to the brilliance of Ray Kurzweil’s “How to Create a Mind.”

IK: Mexico. A small beach town by the name of Zihuatanejo. Friends opened up their house. It was marvelous.

IK: Just do it. Seriously.