Get Your Pride On – Detroit is Proud of Its LGBTQ+ Community 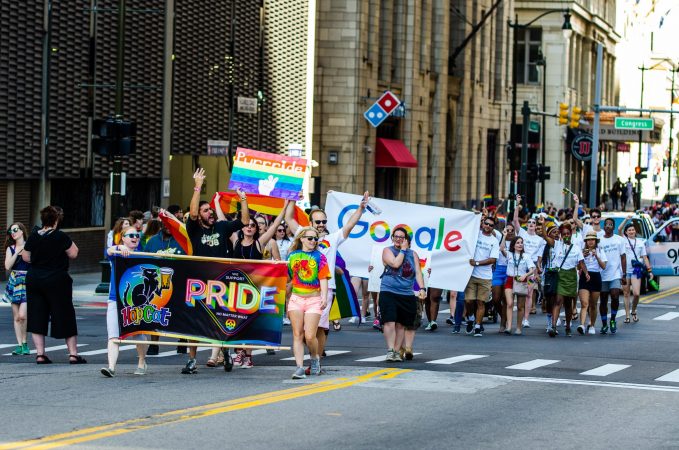 In 1972 Michigan’s first LGBTQ+ Pride event was held in Detroit to commemorate the Stonewall Riots of 1969.

The week-long activities, capped off by a parade and rally in Kennedy Square, were planned and coordinated by representatives from not only Metro Detroit but also from Ann Arbor, East Lansing, and Lansing, and elsewhere in the state under an umbrella group called the Michigan Gay Confederation. It was touted as the earliest example of statewide gay organizing—what we now understand as LGBTQ+ organizing—in the United States.

Now, 50 years on and after two years of pandemic-related adjustments including virtual celebrations and a modified in-person event in September 2021, Pride is back outside in June, in force, and it’s time to celebrate.

The Motor City Pride Festival is Michigan’s largest pride celebration with over 50K participants expected to convene in and around Hart Plaza throughout June 11 and June 12. 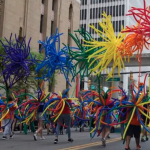 Says Dave Wait, Motor City Pride Chairman, “All things indicate that participation will exceed years past. Vendor booths sold out a month in advance, which has never happened. We have more sponsors and more volunteers – it’s fantastic.”

The festival will feature four stages of entertainment, featuring over 150 entertainers, 140 vendor, nonprofit and sponsor booths, food trucks plus thousands of LGBTQ+ identified individuals coming together for equality

Regarding the celebration of 50 years and what that means to the community, Wait says, “It’s a good way to reflect on the progress we’ve made. Something that wasn’t even spoken about 50 years ago is now being celebrated. We had news coverage and TV cameras at the flag-raising on June 1 … that would not have happened 50 years ago… or 25 years ago.”

He goes on to say,

All the same, we are still fighting for the same things we were in 1972 … having full rights and inclusion. LGBTQ+ individuals are still being fired from jobs and denied access to housing. We are not looking for special rights, just to be treated as equals.

When asked what the festival means personally to Wait, he says, “I look at the festival in three ways. First, it’s about celebrating achievements. Second, it’s about advocating for full rights. And third, my personal favorite is about connecting. Connecting with one another, with businesses and nonprofits … the sponsors, etc. It shows that we are part of a larger community that supports us.”

And Detroit certainly isn’t the only Michigan city hosting a Pride festival. Over 20 Pride celebrations are taking place across the state this month – a record number –  stretching from Ferndale to Kalamazoo to Grand Rapids to Flint to Muskegon to the Upper Peninsula.

Alongside the Pride Festival, many other important and unique works and events are in place to amplify the celebration of 50 years and Detroit’s LGTBQ+ community. 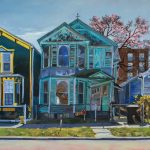 One of which is the first – and nation’s largest – exhibition of artworks by LGTBQ+ artists curated and hosted by Mighty Real/Queer Detroit (MR/QD) in partnership with the City of Detroit Office of Arts, Culture and Entrepreneurship, with the Ford Foundation as the presenting sponsor.

Tim Price who leads marketing for MR/QD shares, “This collaboration is truly a historical deep dive into the diversity of the LGBTQ+ community. Showcasing both emerging and established queer art that’s never been seen, it’s the community working side-by-side to highlight, applaud and also to learn and educate.”

This grassroots event is being curated and organized by dozens of volunteers, who collectively have devoted thousands of hours. It will culminate into what MR/QD hopes to be the inaugural kickoff for a future biannual event and as a continuation and preservation of the largest showcase of Queer art in the United States.

Beyond the exhibition, MR/QD will host an online gallery and publish a future catalog with essays by noted writers and historians that will document the exhibited artwork.

About the amplification of the 50-year anniversary, Price says, “I think it’s so important to have extensions of Pride to bring more awareness beyond the festival. The anniversary offers us a good opportunity to educate and bring more exposure to the community and the scope of things that are being done and generated by and within that community.”

Another extremely unique commemoration comes in the form of a non-fiction comic book.

The story of Christopher Street Detroit ’72 is being brought to life through this full-color, 32-page free piece that’s both contemporary and timely. 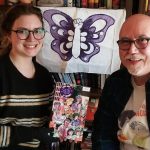 Freelance illustrator Isabel Clare Paul and historian Tim Retzloff teamed up to create “Come Out! In Detroit” over the past year based on eyewitness primary sources, oral histories, and a cache of largely unseen photographs.

When asked why a comic book, Retzloff says, “The story needs to be told. And told again. It deserves to live and be accessible. Other mediums such as articles, radio etc. come and go. A comic book can be picked up and easily digested, passed from person to person and even start dialogue… it can live on.”

Paul says, “I’m so proud to help preserve this most notable event in our history with this piece of work.”

The 23,000 copies will be distributed at Pride events, as well as public libraries, LGBTQ+ community centers, campus gender, and sexuality centers, coffee shops, bookstores, bars, and other sites. Paul and Retzloff will be personally handing them out \ at Detroit Pride.

Furthermore, the comic book’s release will be accompanied by an exhibit at the Detroit Historical Museum that runs through September, and public programs at Michigan State University and in Ann Arbor.

Reflecting on what this 50th anniversary means, Retzloff says,

People coming out and sharing their honest selves with society has had a real impact. There’s backlash too, and that’s part of the story. There’s no denying the truth of our lives – the legacy of the last 50 years.

Last Fall he and Isabel walked the route of that first march in 1972. He says, “Imagine 200 – 400 people diverse in gender and racial ethnicity gathering to nervously march down Woodward 50 years ago. And next week we’ll have 50,000+ people gathering in the heart of the city to celebrate and be 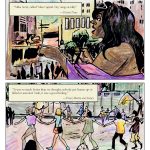 Paul weighs in saying, “What a bold and courageous walk this must have been, to take up space and make people look and listen. And 50 years later Pride still represents a ‘this is our time’ notion that brings the community together to be joyful and celebrate.”

Piggybacking on this, Damon Percy, Historical Archivist for LGBT Detroit and Chair for the Hotter Than July Festival Art Show says, “Nothing can happen without change. The people doing fearless things 50 years ago paved the way for people now.”

Percy weighs in on the importance of fifty years of Pride, and 27 years of Hotter Than July, saying,

One of the great things about Pride is that it’s inspired all of these other events, and collectively, they shine a brighter light on all different areas of the LGBTQ+ community.

In closing, Percy puts it perfectly, saying, “There is a certain risk in doing so, but living your authentic self, being free, and living your truth provides an example for others. If I can give just one person the strength to do this, that’s how we keep it going. That’s how we move forward through the next fifty years.”