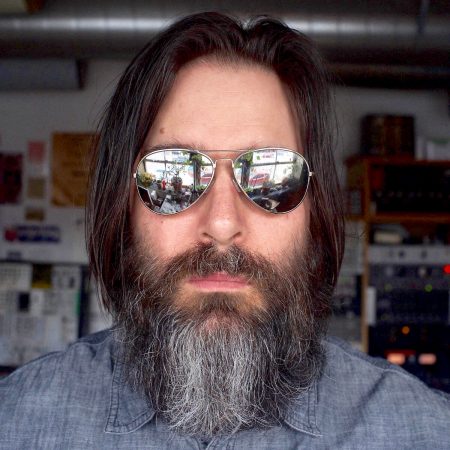 “Koltay is one of a kind. A true music lover and nurturer. Also a very talented sound engineer both technically and spiritually. He once told me ‘I don’t have to like what I’m mixing. Everyone deserves to have a good sounding record and that’s what my job is.'”

A musician and sound engineer and one of the most influential figures in the Detroit music scene over the past 17 years, arguably, the world. Fuck it, the Universe. The reason you may not have heard about him or his recording studio, High Bias Recordings, is because he’s the guy all your favorite artists seek out to get their sound together. He’s worked with everyone from Jack White to Shigeto and plenty in between including Deerhunter, The War on Drugs, Kurt Vile . . . it’s a list, for sure.

“His obsession,” to quote musician Graham A Parsons, “with modular synthesizers and his Smithsonian-esque collection of obscure records” alone propel him to cult status. Parsons, and his band the Go Rounds, sleep on Koltay’s bunk beds when they come to Detroit to record because, yes, Koltay, often houses the musicians he records and makes them dinner because, beyond being a musical genius, he is a gracious host, excellent cook and has a coffee collection that would make your local barista envious.  Plus, he set up shop in Corktown before Slows Bar-B-Q. Which pretty much makes him the actual reason Ford Motor Company bought the Train Station.

DII: What’s the last album you’ve listened to in its entirety?

DII: How do you listen to music at home?

DII: What’s the characteristic you like most in people?