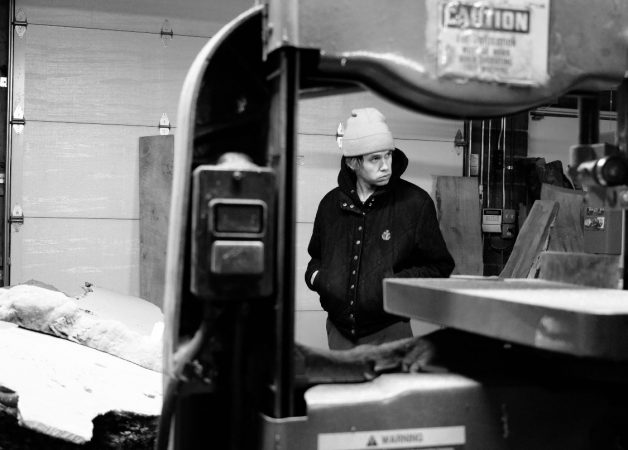 Gabriel Currie started Echo Park Guitars in his backyard in Los Angeles after a construction accident left him with a broken back. After nearly a decade away, he returned to the craft he fell in love with at age thirteen.

If you’re into guitars, his is an impressive story: he studied under Leo Fender for ten years, and when he struck out on his own, some of his first clients were Josh Homme, Stephen Tyler and Jakob Dylan.

I’m not into guitars. The guitar is my least favorite instrument. But I am into Gabriel. During our first meeting together he outlines a history of his craft that winds from Los Angeles to Hamtramck to Ford and has him pointing at a hole punch in awe. Cars, guitars—for Gabriel, it’s all art, and Detroit is a homecoming of sorts.

Not in the sense that he’s from here—he’s not—or that Detroit is the place where you set up shop to manufacture and make tons of money. Maybe for some. But not for him. What draws Gabriel to Detroit is the ability to connect with like-minded people, raise his family and the security to slowly grow his business.

Back in LA Gabriel had long been priced out of his childhood neighborhood, Highland Park, and recently kicked out of the neighborhood where he first set up shop, Echo Park.

His is a story to which many of us can relate. 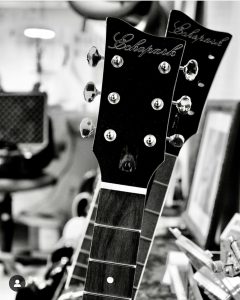 CV Henriette: Growing up in LA. Give us a summary.

Gabriel Currie: I grew up during the early 70s in East LA. There was lots of violence in the streets in my neighborhood and a bit at home too.

I first discovered music’s power to deliver us from this plane of existence at four years old. My first real memory is of getting caught by my mom really late one night creeping up to the stove and peeking over the top of the thing, trying to find the riders on the stove. They were the little pilot light flames on the stove top—at least that’s what I knew the song said. I had been hearing the Doors’ riders on the storm in the periphery at home as the radio played and actually believed the song said “riders on the stove,” so I was trying to catch them in action jumping from burner to burner.

When I told my mom, I remember her shaking her head and laughing. Then she sent me back to bed.

I don’t think I’ve ever been the same since.

CVh: What was the first instrument you learned to play?

CVh: How did you start making guitars?

GC: I was fascinated by the fact that they could paint sonic landscapes.

I grew up seeing my father painting a lot as a kid. While that technical proficiency escaped me, I gravitated towards the mechanical aspects of the instrument—always wondering how and why this thing could make so many noises and textures and melodies and could deliver me from my surroundings.

At 13, while my Jr high school friends were learning Van Halen tapping techniques, during the whole shred craze in the early 80s, I was ditching school and learning how to do modifications and repairs.

GC: That is a very special place for me.

I would spend a ton of time in those neighborhoods. As a kid, I discovered so much about my city and the many beauties in the culture of it. Like the old ruins of the Max Senate Studios on Glendale Ave.

Years later when I was first getting the ideas together for my initial prototype guitars, I found myself in front of that building, thinking of how I could pay homage to the culture, artistry and magic of the area that had inspired.

I hadn’t earned the right to put my name on anything. Echopark was bigger than me. It’s the birthplace of the modern entertainment industry.

Standing before it, I could hear the hope, tears, wealth, wonder and torture it’s produced since the 1920s.

Echo Park is so much more than just a place in Los Angeles. It was a womb of creativity.

GC: Much like Echo Park, I feel like the wellspring of humanities most impacting developments mechanically, socially and sonicly emit from the soil here. I had been gentrified out of my own city twice in the course of the first five years of my company and, honestly, the dryness, long extreme heat, too many people—I’d had enough.

I was raised in LA. There was nothing left to discover. We looked at a lot of places to live, to move our family and raise our daughter where she could thrive.

The cold is nice. I have a good little collection of guitars built here in the 1930s to 50s, and they still play and sound better than anything produced anywhere during that pivotal period in the instrument’s history. I’m here to tap into those elements and create instruments that inspire players and listeners the way the old ones hanging on my studio walls inspire me. 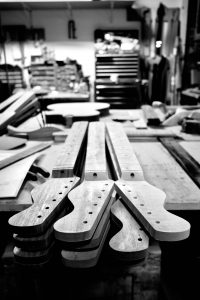 GC:The Secret Home Life of Leo Fender. As told by his 2nd wife.

CVh: Last album you listened to in its entirety?

GC: Depends on the night before.

CVh: Best show ever. Where? When? Who?

GC: Hmmmm…Dire Straits 1980 with my dad at the Greek Theater.

Not a huge fan really but up until then I had been just goin’ to punk rock shows…and they were great! But that was a different experience.

CVh: Artist you wish you saw most in their prime?

GC: Art is humanities only saving grace. I don’t have one.

CVh: Favorite guitar you ever made? Tell us about it. Who’d you make it for?

GC: I found a body and the original templates in an attic crawl space above the office of Leo Fender just after his passing in 1991. I built a neck for it, designed a pickguard, took it home and put it together so I could play it. I have it to this day and it’s inspired all my building in a very alchemic way.

GC: I always ask myself: If you were a tree, what would you want to be reincarnated as?

GC: I want to study the art of building archtop guitars.

GC: Is there a god?? Yes… electricity!