In the months following stay-at-home orders that were implemented in March, Detroit’s Dossin Great Lakes Museum in Belle Isle saw new renovations take place that, in the end, made the center more adaptable to the age of social distancing. With additions to the parking lot, more accessible bicycle amenities, and some environmental updates, the Dossin museum was one of the many locations on Belle Isle to face changes.

While the island is often known for The James Scott Memorial Fountain or the Anna Scripps Whitcomb Conservatory, the Dossin Great Lakes Museum has a history dating back to the late 1940s. Let’s take a look at the center’s history and the various changes the spot has undergone since its humble beginning.

THE HISTORY OF THE DOSSIN GREAT LAKES MUSEUM

When the J. T. Wing was shuttered in 1956, it went out more spectacularly than one would think.

“They actually burned it at the moor,” shared Rebecca Salminen Witt, Chief Development and Communications Officer for the Detroit Historical Society. “It was pretty dramatic. They pulled everything off and it, which was common path practice and the time since it was a wooden ship, and it was moored right off of the island there, so they set it ablaze and that was it for the J. T. Wing.”

After the burning, the site where the J. T. Wing was moored remained vacant until donations from Detroit’s Dossin family and the city’s historical commission lead to the establishment of the Dossin Great Lakes Museum. Breaking ground in 1959, work was completed in a few years and the museum opened in 1961.

After opening and into the modern-day, the Museum remained mostly as-is with only a few additions ever being added. One of the most famous being installing the pilothouse from the SS William Clay Ford to the building. 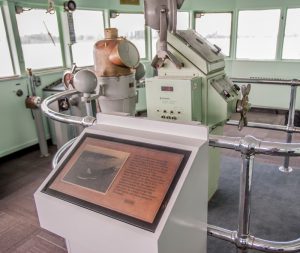 Acquiring the pilothouse was more simple than one may think, as after retiring, the William Clay Ford was set to be cut into pieces for scrapping. Through a donation effort, the city and Detroit Historical Society were able to acquire the pilothouse as a permanent exhibit.

Using the Detroit River to its advantage, the pilothouse now offers visitors to Dossin the opportunity to experience the views from inside a great lakes shipping vessel.

Aside from the William Clay Ford pilothouse, the museum’s other famous exhibit is the bow anchor from the world-famous and Great Lakes legend, Edmund Fitzgerald. While the Fitzgerald sunk in Lake Superior, the bow anchor was actually acquired from the bottom of the Detroit River.

As shared by the Detroit Historical Society, before sinking, the Fitzgerald came to the Port of Detroit, where it lost one of its bow anchors. After the disaster sometime later, divers raised the artifact as a permanent exhibit inside Dossin.

Operating as was with the exception of some renovation efforts, Dossin entered the era of COVID-19 with change on the horizon.

RENOVATIONS AND THE FUTURE

Built on one of the most beautiful locations in Detroit, the option for potential was always with the museum. Going into 2020, plans had long been discussed as to how better utilize the Detroit River and surrounding green areas.

We have this really beautiful Riverfront site which has great views of all the many ships that go by and of course, Canada and we never really made use of this site,

“So, in 2015, the folks who were at the Society started talking about what we could do actually to make use of the site itself.”

Salminen Witt shared that for the first time in 60 years, the museum would be using its outdoor space. This includes expanding the parking lot while making the museum more accessible to people visiting the island, as well as environmental factors such as streambank restoration, water runoff paths, and better utilization of the Detroit River.

When working through the renovations, a natural cove was discovered near the museum, which had suffered from erosion. The team took time to stabilize the streambank while recouping much of the landmass lost over time.

The result saw the use of large stones to rebuild parts of the cove, as well s the implementation of plants to create more of an ecosystem.

The site now works as a landing site for those looking to access the river. While the current is too strong for swimming, the site is perfect for kayakers and paddle boarders looking to take advantage of the area.

Coming at the time of COVID, Salminen Witt shared that the new outdoor options work great for those visiting the museum at this time.

“We’ve been super happy that we did the project when we did because of course with COVID people want outside things to do,” shared Salminen Witt. “We have a more limited number of spaces inside the museum at any given time, so if you arrive at the museum and it’s full with our decreased capacity, then you’ve got stuff that you can look at and do outside and people are really appreciating that.”

At the moment, Dossin is open Thursday – Saturday from 10 am – 5 pm and Sunday from 1 pm – 5 pm. Given the need for social distancing, all visitors will need to register online to access tickets for entry.