A Look at the Past, Present and Future of Detroit Through the Lens of DDP in 2022 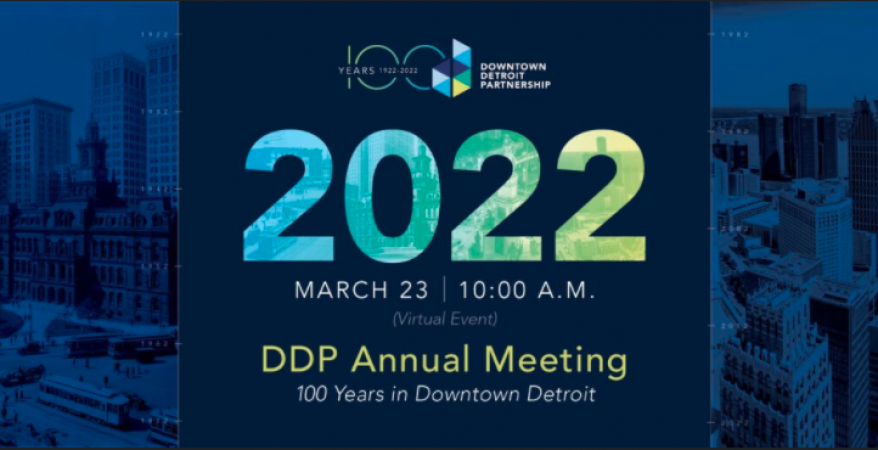 For 100 years, the Downtown Detroit Partnership has worked to convene business, philanthropic and government partners to create a vibrant and resilient urban core for the city.

On March 23 DDP held its 2022 annual meeting, with the theme of ‘Past Present and Future.’

Led by CEO Eric Larson, the virtual gathering highlighted some key data points regarding the city’s present state, indicating that the annual Detroit visitorship, number of workers, hotel occupancy, and BIZ Area Market Value are all bouncing back from large dips that were caused by the pandemic, and commenting that “in 2022 the world is starting to open and the future of our city is bright.”

Larson also reiterated the previous day’s announcement and launch of digital wayfinding kiosks that will be prevalent in all seven districts of the city to help visitors navigate toward entertainment, retail, restaurants, parks, and more.

In looking toward the city’s future, community leaders and business professionals, Nathaniel L. Wallace, Director of Detroit Knight Foundation, Josh Sirefman, CEO of Michigan Central and Orlando Bailey, Director of Engagement of The Center For Michigan | Bridge Michigan | BridgeDetroit shared their perspectives on a number of issues in an informative and raw discussion.

The dialog began with talks around the city’s narrative and storytelling, with Wallace saying that the Detroit Brand has not necessarily been done justice.

Regarding the fact that Michigan Central was at one time virtually the national poster for a city in decay, Wallace remarked that the building and all that it represents going forward is essentially a litmus test for how Detroit will be viewed globally.

Sirefman agreed, saying, “This building has enormous positive emotional power for Detroiters, and we have an extraordinary responsibility to dispel the notion of decline, and then flip it to represent a different message for Detroit. That’s the front line here for changing the narrative.”

Further, regarding the symbolism of Michigan Central, Wallace asked if the city’s nickname, Motor City is an anchor or an opportunity. To that, Sirefman says

Being the Motor City is one layer of Detroit. Mobility is a huge message – but not the city’s entire identity. Mobility as we know it was created here, and we have all the tools, resources, skills, opportunities to create it again in a way that no one in the world can or is doing – and Michigan Central lives in the middle of that.

One pointed question Wallace posed was, what aren’t we talking about that we should be.

Bailey pointed to the city’s blight, saying “As of March 31 people in 11k+ homes must pay property taxes, and those who cannot will face foreclosure. The problem of displacement has not been talked about enough. We talk about the built environment a lot but what about the human spirit? Folks need homes. Detroiters need homes.”

In the vein of where the city’s “spirit” stands today the discussion turned to Tommy Walker’s 2012 launch of Detroit vs. Everybody, with Wallace asking if Detroiters feel that we are on the other side of this underdog position.

I think some people feel they are on another side of Detroit vs everybody, but the folks in neighborhoods still feel like underdogs. There is an unspoken “tax” that Detroiters in neighborhoods have to pay to be a Detroiter. There are barriers and enormous daily challenges. There are many people still in the thick of that, and we have to acknowledge that.

Expanding on the Detroit “story” of resilience and grit Bailey says “Detroiters have habitually been oppressed and knocked down and yes, we are known for getting back up, but as a black man I’m tired of needing to be resilient. Resilience effectively means being on the defense. As a black man in Detroit, I’m never able to fully rest in public … I always have to be alert. I really want to just “be.”

Ending on a pointed question regarding the future…Wallace requested that the two men think of a young person they know today and imagine how that individual will view their city in 2035.

Bailey stated that his hope is that these individuals will see themselves reflected in all sectors – mobility, innovation, technology, and that it will feel like home with a soul and affinity toward the customs and culture we now value as a city.

Sirefman weighed in saying, “I see a city in 2035 where the discussion is no longer around possibility, it’s around doing. By then my hope is that the “what we can be” has shifted to “what is” and it’s ingrained, natural, the norm.”