Held Virtually Due To the Pandemic, the DDP Discussed Gains From the Previous Year With an Open-Minded Optimistic Outlook 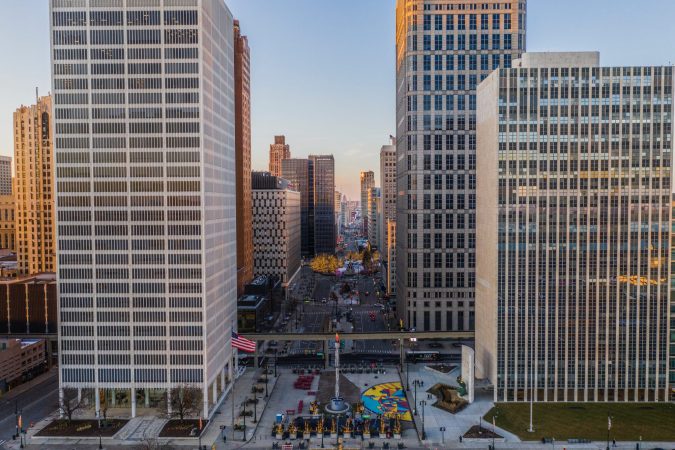 The Downtown Detroit Partnership [DDP] annual meeting looked different this year — like so many things — being held virtually due to the ongoing pandemic. Yet, this aspect did not stop community leaders, elected officials and business leaders from sharing their optimistic outlook for Downtown Detroit and the broader Detroit community as a whole. 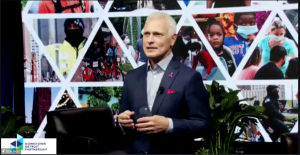 While Carolyn Clifford, News Anchor at WXYZ-Channel 7, was slated to host the event as she had in years past, a family tragedy saw her unable to attend. Speaking in her place, Eric B. Larson, CEO, Downtown Detroit Partnership, began the meeting by introducing Senior Pastor of Second Ebenezer Church and DDP Board Member, Bishop Edgar Vann, who gave a short sermon before talking about the year that 2020 was.

“2020 was a plethora of pandemics. It was not just the COVID pandemic. But it was also a pandemic economically, as we’re we’ve already discussed. But of course also a pandemic in terms of justice, race relations and inequities diversity and inclusion. I’ve always said that diversity is a seat at the table that inclusion is a voice at the table, but equity is really the fair share from the table that the American promise always gives to us,” shared Vann.

“So I think it’s important for us really to address to have the conversations as difficult as they may be because people are broad across an ideological spectrum of the political spectrum,” he added. “But we’ve got to get to a common thread of humanity. And we must understand and especially business people, that as business people, diversity inclusion and equity are just good business. And it’s important as well for us to address hatred and injustice.”

Another speaker for the meeting included Michigan Senator Debbie Stabenow, who spoke from Washington amid the fight for COVID-19 relief in congress. Urging togetherness, Stabenow stressed the gains that come when people take the time to listen to each other while also promising the DDP for the role it plays in fostering productive conversations and projects.

“I think the partnership plays a very important role in speaking out and advocating for the things that make our lives better, that create jobs, support our businesses, support our economy. And so, continuing to speak out and to show leadership in all these areas I think is very important,” she added while praising the work done by the DDP.

While stressing the need to come together, Stabenow talked about the opportunities returning to Detroit that were made possible because of the DDP and the community in Downtown Detroit and the surrounding neighborhood. Praising leaders in the city, Stabenow sowed optimism in the face of the still-raging pandemic.

Turning her eye to the future, Stabenow ended her segment by sharing, “I am optimistic, not because it’s easy — I wish it were easy, It’s not easy, but it’s doable. We’re going to move forward. We’re going to get it done. It’s going to take a lot of hard work, but the reality is that Detroit does hustle harder and I’m just going right along with everybody.”

Larson then joined fellow board members Mark Reuss — President, General Motors — Sandy Pierce — Chairman, Huntington Michigan — and Bud Denker — President, Penske Corporation. The trio took the time to talk about the economics of the past year and how the city was able to adapt. While the past year had its challenges, Reuss shared that companies like General Motors emerged stronger because of the hard work that went into manufacturing PPE and adapting to the challenges brought about by the Pandemic.

It was a bit of a scary time and we’ve been through some of those before with the Great Depression, back then, economically. But, we really jumped into action and are still doing a lot of that which I’m very proud of. It’s been hard, but I gotta say, we really went through a severe downturn and came out of it a better company but also, I think on the good side of our customer base and the nation for really contributing to a lot to the well being of a lot of people which is very important to us.

Adapting to the pandemic was center stage for the meeting, something that is represented heavily in the overall annual report. Based on survey data, mask usage in Downtown Detroit was up, those visiting felt safer and residents felt safer inside and outside of buildings. The report also highlighted the summer protests in Downtown Detroit, sharing that many felt it allowed for the fostering of positive discussion that can help to alleviate injustice.

All in all, amid an uncertain year, the Detroit community emerged stronger in part due to city and community leaders, as well as business professionals that have worked extensively to adapt to the pandemic and economic crisis.

“You know, if you look at every, every year except this last year that we’ve had that, you know, you look around at that event, and it’s really the whole city from kids in the Detroit Public schools that are granted access to see something that you know lots of people haven’t seen before,” stated Eric Larson, as he ended the talk.

The complete annual report from the DDP can be found at downtowndetroit.org/2020annualreport and highlights key aspects of the organization’s work throughout the pandemic and 2020. As always, be sure to subscribe to our newsletter for regular updates on all things Detroit and more.