Mayor Mike Duggan and DDP’s Board Chair, Cindy Pasky, Discuss Summer Goings-on in Detroit in One of Detroit’s Most Loved Downtown Parks 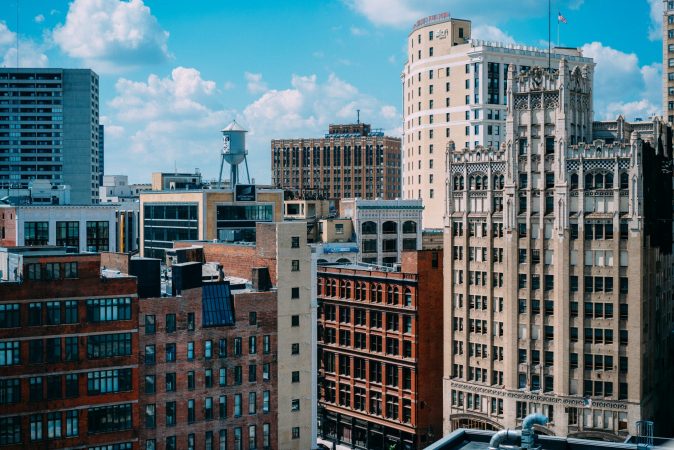 Sustainability, mobility, reopening, and all things Detroit were the focuses of Downtown Detroit Partnership’s (DDP) Virtual Summer Stakeholder Meeting on June 15th, 2021. This meeting was what DDP’s CEO, Eric B. Larson introduced as hopefully the last virtual DDP event as the pandemic winds down due to vaccines and the coming of summer.

“This past year has been very difficult, but we are coming through it and we’re ready to come back and embrace not only those people we love but those activities that are so near and dear to us,” Larson said, proceeding to turn the camera over to DDP’s Board Chair Cindy Pasky and Mayor Mike Duggan.

Pasky and Mayor Duggan began their conversation by discussing the success of the Detroit Grand Prix on Belle Isle.

“We officially opened the city in a unique way,” Pasky said, “we had our Grand Prix, we had racing on the island, we had over 10,000 fans, we had full chalets, we had families picnicking, and of course we had our ambassadors, and of course it was absolutely spotless.”

The two went on to discuss one of Mayor Duggan’s top deals that have and will continue to influence city sustainability and employment at the Jeep plant on Mack Avenue. Stellantis has already hired 3,000 Detroiters, and are looking to hire more as the

factory pushes to make a quarter of a million cars a year. “There are a thousand more hires to go, and they’ll all be Detroiters as well,” Mayor Duggan said.

The deal involved Stallantis looking at Detroit workers through Detroit at Work in order to fill their needs. Mayor Duggan mentions how important Detroit at Work is in order to break down barriers between individuals and jobs. Barriers such as lost high school transcripts taking weeks to find resulting in Detroiters missing job opportunities. These are things the city has worked to find resolutions to.

Corktown’s revitalized train station was discussed next, including the roughly 5,000 jobs it will bring to the area, the predicted dedicated lanes for self-driving cars and a $30 million grant that will enable Corktown to build and create some 840 new, affordable housing units as an effort to minimize the rising rents for city residents and the gentrification that is already beginning to take place in the neighborhood. “That’s what this city is,” Mayor Duggan stated, “is people of all incomes should be able to live in all neighborhoods.”

General Motors’ (GM) involvement in the city, as well as their work on 100% electric vehicles, which will create roughly 2,000 jobs at the GM plant, was also discussed. Supplier plants are also looking to land in Detroit and the Metro area as an effort to keep supplier plants close to the assembly plants.

Hopes for the city’s crime rate to decrease were discussed, as well as what the city struggles with currently. “Wherever you are in the city you should be equally comfortable, and that’s what we are trying to create,” Mayor Duggan said.

Vaccination hopes were shared as well, as Mayor Duggan and Pasky acknowledged COVID-19 rates and deaths falling as the temperature outside increased. However, Mayor Duggan shared that he fears that similar to 2020, rates will increase in the fall and he hopes people will take the time to get vaccinated now before that uptick can even occur.

Mayor Duggan shared his excitement that now that he is vaccinated he can go to the neighborhoods and speak with individual Detroiter residents once more. This, along with his mission to eliminate all abandoned buildings from Detroit, including the well-known Packard Plant, will be continued if he is reelected for a third term.

In the Livernois neighborhood, the Avenue of Fashion is beginning to hit its stride again. Mayor Duggan stated that 22 new Black-owned businesses were opened in the area, and now there is so much traffic to the neighborhood that parking has become somewhat of an issue.

Pasky and Mayor Duggan’s conversation came to a close as they discussed how important it is that Detroiters continue to work in the city as well as support each other and the amazing local business scene located here. “Hire Detroiters, support Detroit businesses, support Detroit entrepreneurs, help to seed and fund Detroit entrepreneurs,” Pasky said, “The talent is there, the businesses are there.”

Larson brought the program to a close through the Return to Work Survey. The survey found that 61% of employers are looking to bring workers back to offices in some capacity in July, and 93% said workers would return in the fall. These results, it seems, show that the Downtown scene will have an influx of business and revenue to look forward to.

“It’s good news to know that they are coming back,” Larson said. “That’s not to say that this past year hasn’t been without challenges, and we continue to see some of those challenges with a number of the small businesses and the way that we need to continue to support those.”

The Spirit Card is one unique way to support local businesses and put money back into the Downtown economy. As always, be sure to subscribe to our newsletter for regular updates on all things Detroit and more.