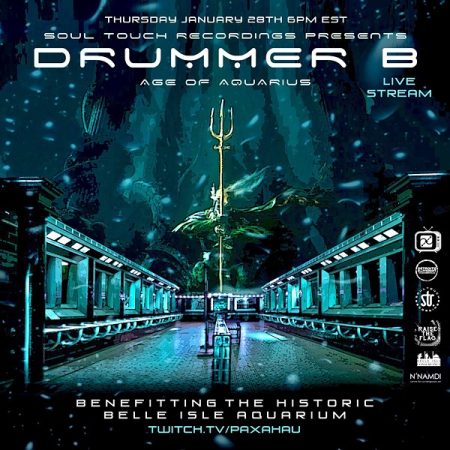 On January 28th, Techno artist and Detroit native Drummer B plans to debut his latest project, A.O.A. (Age of Aquarius), to help raise donations for Belle Isle Aquarium, which has been forced close due to COVID-19. The performance will begin at 6 p.m. and is presented by Soul Touch Recording.

For those unfamiliar, Drummer B is a self-made producer, DJ, art collector, and musical tastemaker, born and raised in Detroit. Leonard Ware, now known as Drummer B, is no stranger to the music and entertainment industry.

Why the name A.O.A? Drummer B is indeed an Aquarius.

Before the pandemic began, Drummer B had plans to perform at Belle Isle Aquarium, as he had a love for aquariums as a child. To be mindful of the fish, the performance was originally envisioned as a “silent disco,” where ravers would listen to music on wireless headphones.

Although this initiative was quickly canceled due to the pandemic, he pivoted to the idea of a virtual concert. The concert would consist of himself performing f inside the aquarium with no audience and it would be streamed online.

The new idea of A.O.A. encompasses an aquatic theme experimenting with a variety of ambient, aquatic sounds and electronic-based production. An album that was produced to feel like a soundtrack or score to a movie. His childhood love of fish and aquariums, the aquatic theme, and the sound of the album inspired Drummer B to use the Belle Isle Aquarium as a visual backdrop. 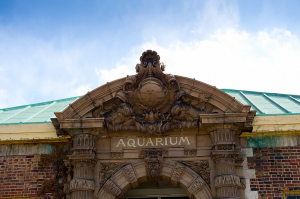 “I loved fish and aquariums as a kid. I’m also a water sign, an Aquarius born on February 6th. This inspired the album and stream title “A.O.A” Age of Aquarius,” Drummer B shares. “The historic Belle Isle Aquarium and staff are in need of our support to maintain the building and help sustain the aquatic life that resides there. Proceeds from A.O.A. live stream will directly support this effort.”

A musicologist, producer, DJ, and musical tastemaker, Drummer B is no stranger to the music and entertainment industry. He has worked with D12, Slum Village, The Black Birds, Umar Bin, The Last Poets, Nick Speed, Danny Brown, Dope Head, Jessica Care Moore, and many more.

Even with 2020 being a trying year for the music industry due to Covid-19, Drummer B recorded three successful live stream performances for the Detroit/Chicago/Berlin Music X Design, Movement Selection Vol. 3 and a set with Techno pioneers Juan Atkins and Derrick May for the Museum of Contemporary Art and Design.

Music enthusiasts can get a first listen to the exclusive stream of A.O.A. from the Belle Isle Aquarium, powered by Paxahau, by clicking here on January 28th at 6 p.m. The live stream will benefit the historic facility, which is managed and operated by Belle Isle Conservancy, with a donation link going live during the stream, which will include a Q+A after an airing of the pre-recorded DJ set filmed at the Aquarium.

For those looking to further support Belle Isle Conservancy, which operated by a mission to protect, preserve, restore and enhance the natural environment, historic structures, and unique character of Belle Isle as a public park for the enjoyment of all – now and forever, click here for more information.